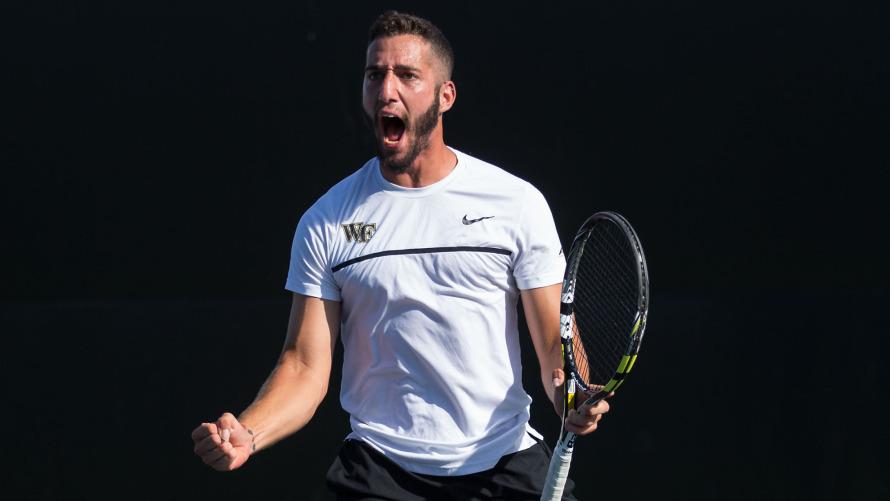 Borna Gojo, from Croazia, and Alan Gadjiev, from Uzbekistan, made their Wake Forest season debuts and won 6-2 in a convincing manner. Both athletes kept their first serves in play, thus forcing the North Florida team to be defensive.

North Florida never had control of the game and gave way to our impressive duo. This was the only doubles win. However, the Deacs’ won the first five matches guaranteeing an overall victory; Gadjiev at the No. 5 spot won 6-2, 6-0, while Christian Seraphim won 6-2, 6-2 playing at the No. 4 spot.

Dennis Uspensky at No. 6 and Petros Chrysochos, the No. 1 ranked player in the country, both closed out the competition with wins.

In particular, shining during his singles debut, Gojo won 6-0, 6-0 and sat down with the Old Gold & Black to reflect upon his first impressions with his new team.

What are your expectations for your first semester of collegiate tennis?

My expectations are very high. I think we are a great group and I think we can do a lot of great things this year, including contending for a national championship.

What are the biggest difficulties of learning to play with a new doubles partner?

Learning to play with a new doubles partner is just a process of getting to know your partner and trusting him more.

What would you say is the strongest aspect of your game? What is the weakest?

The strongest aspect of my game is my serve and I would say and weakest is probably my net play.

Do you relish the chance to be training and competing with a No. 2 ranked team that has the best singles and doubles players in the country?

I’m really honored to have the opportunity to play with best college guys and trying to learn every day from them.

What in your mind is the biggest challenge you’ll have to face as you adapt from Croatia to the U.S.?

The biggest thing that will take some adjusting is getting used to rhythm of balancing school and tennis at the same time.

The Demon Deacons have captured everyones attention, but this seems to only fuel their intensity as they look to achieve success after success. The next home game is  Saturday, Jan. 21.