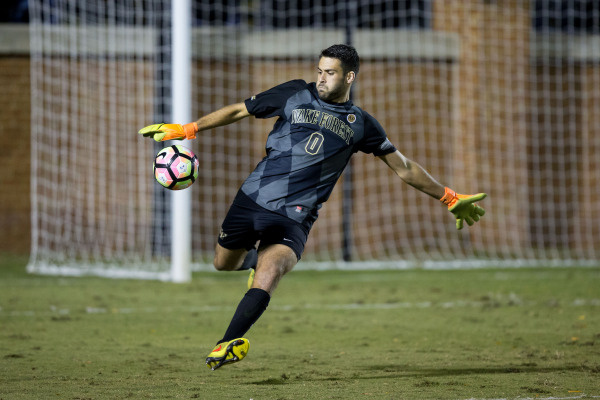 The Wake Forest men’s soccer team has consistently been one of the top programs in the country, ever since its conception in 1980.

In 37 seasons, the Demon Deacons have made the NCAA Tournament 20 times while making it to the College Cup on five different occasions and winning one national title in 2007. The program boasts six ACC regular season championships, two conference tournament titles and 36 individual All-American recognitions.

More recently, in 2016, the Demon Deacons sent then freshman Jack Harrison to play Major League Soccer as the MLS SuperDraft’s first-overall selection. And just this season, the program celebrated the recognition of senior Ian Harkes as the 2016 Hermann Trophy award winner, only the second Demon Deacon to receive the honor as the nation’s best player.

Before last week there had been 31 Wake Forest players drafted in the MLS SuperDraft — but as of Friday, Jan. 13, two more were added to the impressive total as midfielder Jacori Hayes was selected 18th overall in the first round by FC Dallas, while goalkeeper Alec Ferrell was picked with the first selection of the second round, 23rd overall, by Minnesota United.

Ferrell, who was the first goalkeeper taken in the 2017 draft, will head to Minnesota United, which is a MLS expansion team.

“Alec proved time and time again that he was the top keeper in college soccer,” Wake Forest coach Bobby Muuss said of his senior goalkeeper that earned 22 solo shutouts in 63 career starts. “He’s incredibly deserving of this opportunity and we expect him to excel in Minnesota.”

With Hayes’ first-round selection, Wake Forest achieved the feat of getting a midfielder drafted in the first round in back-to-back seasons (Harrison, 2016).

“I’m absolutely elated for Jacori on his first-round selection,” Muuss said of his model player. “FC Dallas is getting a player with incredible talent, discipline and determination, and I’m confident he’ll be successful at the next level.”

Hayes finishes his Wake Forest career with 15 career goals and 15 assists. Impressively, 10 of his 13 goals as an upperclassman went for game-winners.

Concluding the trio of Demon Deacons headed to the MLS is Ian Harkes, the son of former U.S. International player John Harkes.

Harkes reportedly explored options with second-flight clubs in England before ultimately opting for the multi-year contract offer he has agreed in principle to sign with D.C. United.

Harkes will return to D.C. where he played before attending Wake Forest. While in high school Harkes played for D.C. United’s academy, which gives him the ability to sign a homegrown deal and permitted him to forgo the MLS SuperDraft.

The Deacs will miss the trio of Harkes, Hayes and Ferrell. However, they hope to see others follow in their footsteps.