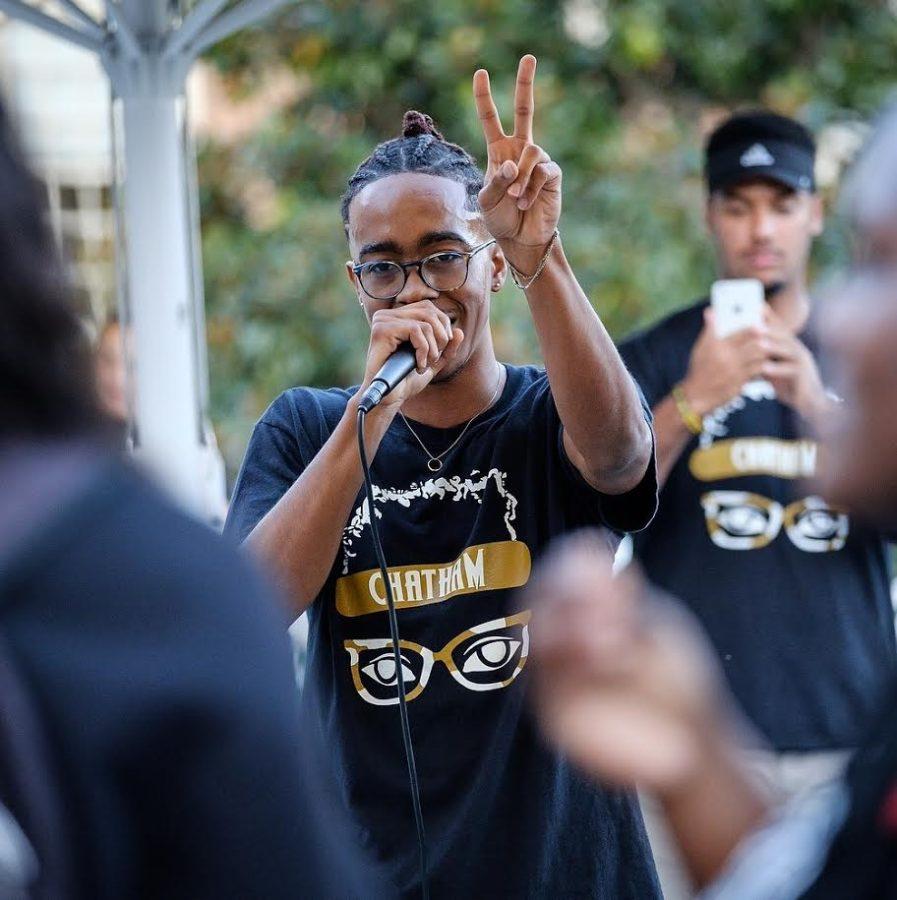 Jamerdon Dean, known to most by his artist name Dean Chatham, is a senior planning to release the final project of his hip-hop series entitled “Dean’s List” before he graduates in Spring 2017.

After switching directions from a Physics major to Communication, Dean has been able to explore the craft of creating and performing the hip-hop music that he says has always been a part of his life.

Is there a story behind your artist name?

Yeah, Dean is actually my last name. But my artist name came from my last name and my street — Chatham. I’ve pretty much lived on the same street my whole life. My grandparents lived there, I moved in with them at some point in my life and stayed there. They’ve both been there longer than I’ve been on earth, so I like representing it. I think more people know me now as Dean, even though I didn’t start making music until sophomore year.

What made you start making music in  college?

Well, prior to anything in college, my little brother and I used to freestyle. It was me, him, and my cousins just throwing a beat and just freestyling to it. When I got to school I went to a party one day. At this point I had never freestyled in front of anyone besides my brother and my cousins. I was a little bit under the influence, and I think that’s what opened me up a little bit. Next thing you know these guys are sitting at the table having a cypher, so everyone is taking turns rapping to a beat. I’m sitting there enjoying it and then they say, “Yo, JD come on, get in on this.” And I was nervous, you know, but as the night went on, I joined in. And as legend goes, I rapped for like 25 minutes — just straight, crazy fire. They let me go on four or five different beats, listening to me.

My brother used to always tell me I was good, but being a science guy, I never thought I could take rap seriously. So in my mind I was like, “Okay yeah sure, thanks.” But when all of these people told me that I had a gift, and that I should write a song, that’s when things changed.

What is it about creating music, and hip-hop specifically, that speaks to you?

When I look back, hip-hop has just always been a part of my life. I think it started with me simply liking words. There weren’t a lot of forms of music that had so many words and so many complex patterns — how you put them together, how they sound. No other genre really stuck out to me in that sense. Those other genres were more melodic. But hip-hop was just word after word after word, which to me is very spastic. I love breaking down the meanings of words — making fun patterns out of different words, double entendres, metaphors — all of those. And growing up my dad was a hip-hop head, so he was constantly playing it around me. I guess I have always been low-key obsessed with it, I had just never realized it.

You put on an event over winter break. Could you tell us about it?

So that event actually started out early this past summer with me and my best friend, who is a personal chef. We organized what we called a “Chatham Festival,” but we didn’t want it to be a typical hip-hop show. We wanted to make it different in some way. So we said lets combine our talents. We used my aunt’s venue — she owns a building downtown so we rented it out from her. We built our own stage from nails and wood and hammers and put lights on it. My best friend catered the event. We did pretty well, we had about 30-40 people come out. We thought that was a success, just from the fact that it started from nothing.

Later on, we started planning for another one to be over winter break. We wanted to make it bigger and better so we rented out a bar. It was this really nice venue downtown called Mohawk Place. I had performed there before and they were really familiar with me so they allowed us to cater, and we had a girl come and sell jewelry. Basically, I recruited the best artists in Buffalo, and at this point in my career I’ve worked with a lot of them.

So many people are doing good things in Buffalo. We’re building each other up because we’re trying to build the community. So then at least when one person succeeds, the community itself flourishes. For this event in December we had about 90-100 people show up. The crowd was crazy and the energy was something I’d never seen ever at a hip-hop show. We were telling everyone about it because we were so excited and it was such a community feel. It was beyond any expectations I could’ve had, and it really showed me that anything is possible. All of that started from that small idea that my best friend and I had that one day this summer. Everyone had a part in it — even the chef, the culinary art was a big part.

Are there any current projects that you are working on?

Yes, which is crazy. Sophomore year when I started out, I became addicted really quickly so I was doing some crazy things. I put out a project every semester, which is a lot of work. The projects I did every semester were collectively called “Dean’s List,” but the ironic thing is I never made the Dean’s list — I was so busy making “Dean’s List” that I never actually made it. So at this point in my college career I’ve never made the Dean’s list, but I’m very in control of the musical aspect of my life. I was always out of balance the past semesters, just barely getting by in school, but always doing something new in terms of music. The first one was called “Dean’s List EP,” the second was called “Dean’s List 2: The Mixtape,” and the third was called “Dean’s List 3.” So this last one I’m just going to call “Dean’s List.” It’s going to honor me actually making it, because I know I can. And I will. Everyone’s behind me with this one. I feel like the school is and my city is, which is a different type of energy than just having your friends and supporters. Having a group behind you makes a difference, especially with a project like this followed by graduation and then the real world.

If I go to New York, this is going to be the CD I’m going to be walking around with, trying to find Jay-Z. It’s going to be released probably a week before graduation so I can still see people and celebrate. To me, in my head, this is way more official than anything I’ve ever released. All the instruments are made by my friends or people that I know. I think its something that could go on iTunes, and it needs to, because its more than a mixtape.