Deacons earn first victory in Raleigh since the CP3 era 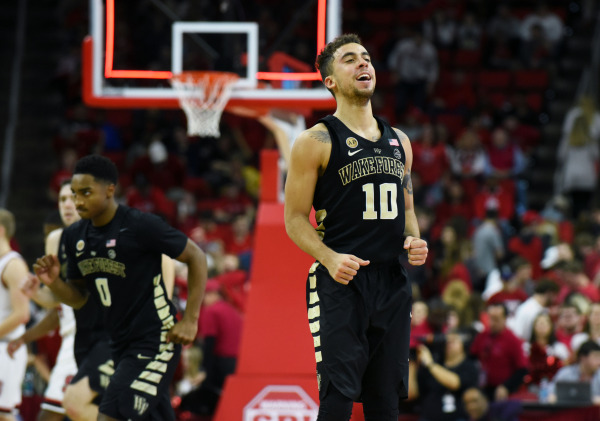 Wake Forest traveled to NC State on Saturday, Jan. 21 in search of its first ACC road victory since January of 2014 and its first win in Raleigh since the days of Chris Paul and the late Skip Prosser.

The Deacs played with poise and were able to fend off freshman phenom Dennis Smith Jr. and the Wolfpack to return to Winston-Salem with a 93-88 victory.

Indisputably, the game was won from the free throw line as Wake Forest connected on 27 of its 31 attempts while N.C. State connected on just 16 of its 27 tries. Sophomore John Collins carried the momentum from his 9-9 free throw and career-high 27 point performance over Miami to dominate the paint against the Wolfpack for 21 points and nine rebounds.

In the first half it was N.C. State that extended an early lead to nine points as Smith and the Wolfpack jumped to a 19-10 lead in just over six minutes of action.

In the first half alone, Smith finished with an impressive total of nine assists with just one turnover.

This early momentum came to a quick stop for the Wolfpack as Smith was forced to exit the game, having committed two fouls early in the half. Wake Forest capitalized on this substitution and retook the lead with 10:03 left in the half as freshman Brandon Childress drove to the basket for a layup.

The final 10 minutes of the half featured an exchange of baskets between Collins of the Demon Deacons and Abdul-Malik Abu of the Wolfpack, who finished the first half with 13 and 17 points respectively.

Wake Forest, having been down by one point at the half, began the second half on a 7-0 run as sophomore Keyshawn Woods came out with a quick five points and sophomore Bryant Crawford added a layup himself, giving the Deacs a six point lead in less than two minutes into the half.

The play of the game may have come on the defensive side of the ball for Wake Forest as Childress picked the pocket of his friend and former teammate, Dennis Smith Jr. with 16:37 left in the game. Childress’ steal over the future NBA lottery pick was a rare mistake for Smith, who has protected the ball as well as any guard in the country this season. Arguably, Childress was able to use his past experience of playing with Smith to make a few in the ACC could make.

This steal set up a layup by Woods that extended the Deacs’ lead to five.

Wake Forest was able to hold the lead for the remainder of the game, but not without a bit of drama. Having connected on a pair three-pointers in the last minute of the game, the Wolfpack found themselves down by just two points with 17 seconds remaining in the game. But four big free throws from Mitchell Wilbekin closed this one out for the Deacs, giving coach Danny Manning and his staff their first road victory in the ACC since he took over for Jeff Bzdelik in 2014.

The Wolfpack pulled off the upset on the road at Duke and knocked off the Blue Devils in Durham for the first time since 1995 under the stellar performance of Smith who finished with a season-high 32 points.

While NC State was able to bounce back from its loss to Wake Forest, the Deacs were unable to continue the momentum it gained in Raleigh to defeat Syracuse on the road.

Wake Forest fell to the Orange 81-76 despite leading for a significant portion of Tuesday’s game.

Collins’ 23 points and 12 rebounds proved not enough for the Deacs to pull off their second straight road victory.

The Deacs will host Duke on Saturday, Jan. 28 in front of what is expected to be a sell-out crowd.

Look for Wake Forest to play with a little bit of extra motivation as it prepares to face freshman Harry Giles, a native of Winston-Salem that chose the Blue Devils over his own hometown team.