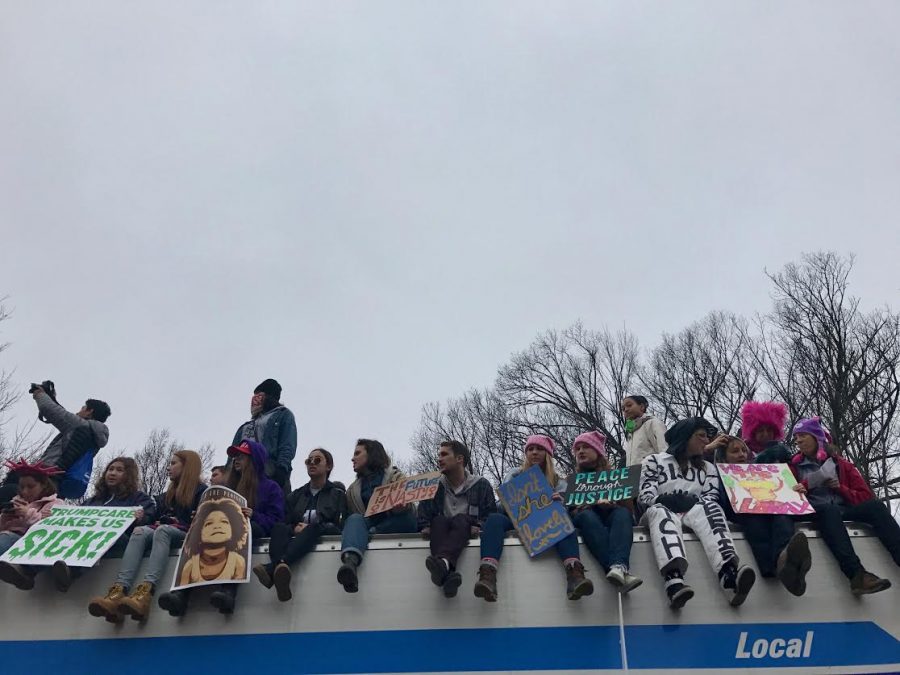 As the sun rose a few hours after the last inaugural ball for President Donald J. Trump cleared out, hundreds of thousands of protesters eagerly filled the tired, quiet streets of Washington D.C. with loud chants of “not my President,” “this is what democracy looks like” and “my body, my choice.”

The Women’s March on Washington is considered the largest inauguration-related protest in U.S. history. The message of intersectional feminism stretched from D.C. to Los Angeles, to London and Santiago, with sister marches reaching 70 countries and all seven continents.

All marchers protested with a specific purpose, whether to protest President Trump, to promote pro-choice policies, to raise awareness on sexual assault, to address diversity issues, to support LGBTQ rights, to acknowledge climate change or for more individualistic reasons.

Wake Forest students were among the hundreds of thousands of marchers in Washington, D.C. and other sister cities, all marching with their own motivations. Organizations such as the Women’s Center or Wake the Vote made the trip to the Capital more feasible, but plenty of student marchers also drove to the protest themselves.

Paige Meltzer, the founding director of the Women’s Center, organized 40 students and six staff members to take a bus to Washington D.C. for the march.

“This was an opportunity for our students to be in community with other people around the country supporting women’s rights as human rights, and those who are committed to diversity, equity and justice,” Meltzer said. “The women’s center supports women and promotes gender equality, which is exactly what the Women’s March at its core aimed to achieve.”

The march was described as a means of personal growth and healing, as all marchers brought unique motivations to  the protest.

Junior Emily Aranda was among the first to sign up for the Women’s Center bus, and brought her family experience to the march.

“I marched because I am a first generation, Hispanic woman who believes deeply in my responsibility to others,” Aranda said. “I recognize that not every immigrant has been afforded the opportunities that my parents have, and that not every child of an immigrant has been offered the opportunities that I have. My parents came from poverty and war-stricken third world countries in order to make a new life for themselves as Americans.”

For others, the march aligned more closely with the idea that gender equality should be a pillar of the incoming administration. Trump’s statements during the election cycle regarding women, specifically women of color, encouraged them to march for respect and equal treatment from their president.

“I marched because I believe in the equality of all people no matter their race, religion, sexual orientation or gender,” said freshman Lizzie Lordi. “Because of the rhetoric during this past election cycle, I feel that individuals’ rights and this idea of equality is threatened. However, for me, it was not an anti-Trump march. I accept that he is our president and I grant him the respect that comes with that title. But now more than ever we need to make our voices heard.”

The phrase “intersectional feminism” floated around the march, referring to is the idea that men and women face varying forms of oppression along the lines of gender, race, religion, ethnicity, socioeconomic status or other determining factors. Many marchers later criticized the event for overwhelmingly lacking diversity and inclusion for all members of society.

“I attended the event as an intersectional feminist, an Asian woman, and a daughter of refugee parents — a woman of certain sorts,” said senior Ann Nguyen, who covered the march as an Elle scholar. “However, I noticed that many of the attendants were not marching there for all women. The pink hats and posters referencing female genitalia were plentiful, but excluding issues of trans and queer women, immigrant women or disabled women. The attendees were selective in who they considered a woman and who could protest about their particular womanhood.”

If the goal of the march was to show a united front against oppression of all women, the importance of remaining united is crucial to the future of the movement. Undeniably, issues exist within the feminist movement, as there is no one-size-fits-all type of woman or type of feminist.

However, the March on Washington and the global sister marches sent irrefutable messages to the incoming administration regarding gender equality through sheer numbers. Estimates ranged from one to five million marchers around the country, all marching for different reasons and leaving the respective marches with unique sentiments.

“I went to the march to stand with the million women who demand equal pay, reproductive choice and justice for the oppressed and marginalized,” said sophomore Maddie Baxter. “As I rode home, I became excited and energized for the conversations I knew were to come with my peers. I learned that the voices of many always rises over the voice of one, and that, ultimately, action derives from the intersection between each activist group that fights for a common cause.”

Whether or not the incoming administration addresses the issues central to the march, for many it was a means of initiating difficult conversations and mending partisan gaps. The sentiments expressed during the march did not cease on January 21 when the sunset and the streets slowly emptied. As Donald Trump continues his first week in office, women around the country prepare to continue their ongoing fight towards equality.

“I am in complete awe of this march, all it has shown me, the myriad of ways it has inspired me, empowered me and planted a seed of hope within me,” said freshman Alice Romanov. “I come back from the march more inspired than ever to engage in my community, to engage in dialogue, to bring awareness to Wake Forest. I want to believe that this march was the start of an enduring movement, not a cathartic moment, and I am ready to fight to make that happen.”