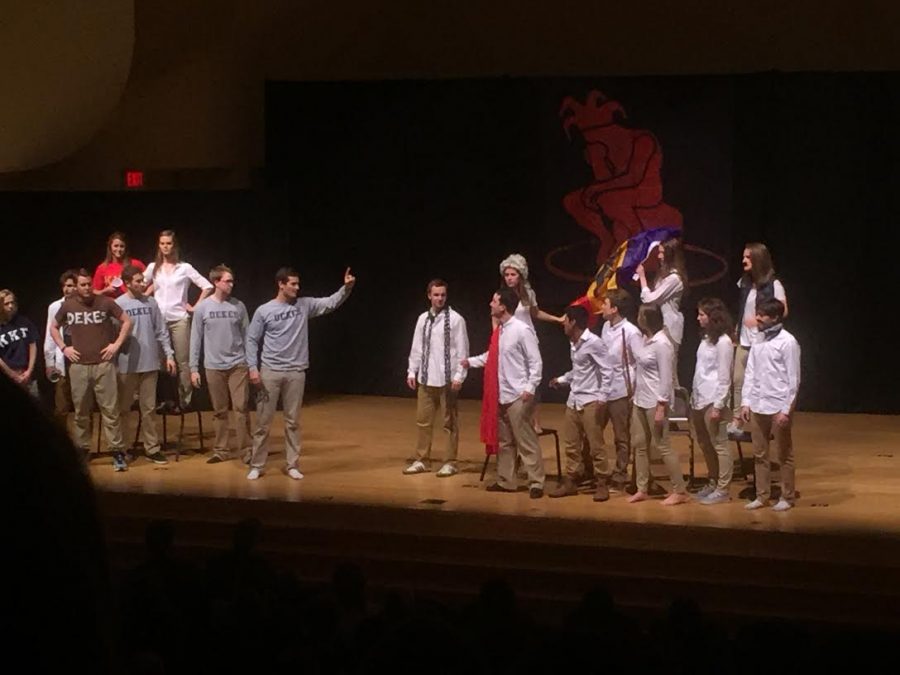 The Banshees performed their third show of the year last Wednesday, Jan. 25, and they did not disappoint.

Wake Forest’s favorite comedy troupe recalled their favorite sketches from over the last four years for their fifth “Best Of” performance. The auditorium was packed with students and some faculty for both shows, and the 10 p.m. show sold out within 31 hours of ticket sales.

As usual, the show began with quirky phrases and jokes on the projector. The one-liners captivate audiences while they wait for the show to begin. While the slides were not quite comparable to past performances, they still earned well-deserved chuckles.

Troupe senior Julie Kanter ignited the show with her enthusiasm during the opening sketch, “Egyptian Coffee Maker.” The sketch portrayed disgruntled Egyptians complaining about their lack of a Keurig coffee dispenser in the break room. Originally performed in 2013, the sketch was even more hilarious the second time through.

“I feel most emotionally attached to the first sketch in our show, ‘Egyptian Coffee Maker,’ because it was originally from my very first show as a freshman,” Kanter said. “I got to play the exact same part, but everyone else in the sketch was different. It felt familiar and totally new all at the same time.”

The show weaved through 12 separate sketches and two additional shorter bits. Each sketch was separated by the troupe’s enthusiastic dancing, a personal favorite element in the show.

One of the most popular performances featured tour guide hopefuls as they endure intensive training, a nod to Greek life initiation practices. The students learn to tell anecdotes about their teachers while walking backwards and pointing. Junior Luis Herrera and sophomore Carson Markland commanded the stage as “pledge masters” of Tau Gamma, or “Tour Guides.”  The sketch was originally performed in November 2015.

“This show was very special to the five members of the senior class because they are sketches dating back to our freshman year,” Kanter said. “It’s been really special to get to work with things we wrote as freshmen and things our previous directors and troupe members wrote.”

The finale, however, was spectacular. Fans of the musical Les Miserables were enrapt in the troupe’s rendition of the story, replacing French peasants with Delta Kappa Epsilon pledges. Senior David Caliguire starred in the hilarious depiction of DKE pledges revolting against their upperclassmen brothers. As a dedicated Banshee fan myself, I had hoped to see the troupe perform the Les Miserable sketch one last time before graduating.

“It was fun and entertaining to see the best skits from years past and reminiscing on all the good times since freshmen year,” senior Kellie Giesel said. “I really enjoyed the Les Miserables skit. I can’t wait for what else they have in store the rest of the year!”

“Best Of” left me doubled over in laughter. From junior Ellie King’s portrayal of a young girl plotting to murder her parents, to junior Lando Pieroni’s dance as the “blackout fairy,” the crowd laughed nonstop during the hour and a half show.

The performance featured all 22 members of the troupe, including five members who returned from studying abroad. Despite having only a week to rehearse, technical issues were minimal during the 8 p.m. show.

In February, the troupe will collaborate with the Upright Citizens Brigade, an improvisational and sketch comedy group from Chicago. The Banshees will perform their fourth and final show of the year in April.