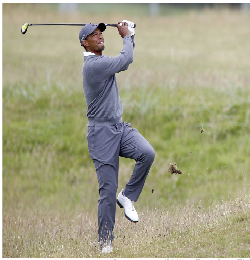 This past weekend, the Farmers Insurance Open was held at the famed Torrey Pines, which many golf analysts deem the unofficial start of the 2017 PGA Tour calendar.

High profile players including Phil Mickelson, Rickie Fowler, Justin Rose and World No. 1 Jason Day participated in the tournament based in San Diego, CA. However, the biggest storyline going into the competition was the return of Tiger Woods.

Torrey Pines is traditionally one of Woods’ favorite courses as the 14-time Major winner has eight PGA Tour victories at Torrey Pines. However, Woods did not factor into this year’s contest. Woods posted scores of 76-72 over the first two days and missed the cut in his first tournament since last year’s Hero World Challenge. Following a slew of injuries and recent swing changes, Woods never seemed comfortable as he continued to struggle with consistency. His next tournament will be the Omega Dubai Desert Classic this week, which features another star-studded field. Woods, 41, looks to find his once dominant game before the Masters in April and the summer Major Championships.

Going into Sunday, Patrick Rodgers and two-time and defending champion Brandt Snedeker shared the leader at nine-under. However, this weekend belonged to Jon Rahm, a 22-year-old from Spain making only his 12th start as a professional. Rahm was 6-under after 54 holes, but finished the weekend with a 30 on the back nine. Both Rodgers and Snedeker had too many costly bogeys during the fourth round to catch the young Spanish phenom. Rahm ended his round with an eagle putt from 60 feet on the 18th hole to clinch the competition. The former Arizona State Sun Devil finished the weekend 13-under, which included a final round 65.

Charles Howell III and Cheng Tsung Pan were the runner-ups at 10-under, while Day and Fowler both missed the cut. Fan-favorite Mickelson ended in a tie for 14th at seven-under, and Rose completed his tournament in a tie for fourth at 9-under. Former Demon Deacon golfers Bill Haas and Webb Simpson did not participate in the Farmers Insurance Open.

Even with no previous PGA Tour victories on his resume, Rahm’s success does not come as a surprise. Rahm was considered one of the best amateur golfers his final two years of college, leading him to prestigious individual college golf honors such as the Ben Hogan and Jack Nicklaus Award. At Arizona State, Rahm’s coach was Tim Mickelson, Phil’s brother, who is now Rahm’s manager. Rahm’s best finishes previously were a third place finish at the Quicken Loans National in Washington D.C. and a second place outing at the Canadian Open. Besides earning roughly $1.2 million, Rahm also qualifies for this year’s Masters and moves into the top 50 of the Official World Golf Rankings.

Next weekend, the PGA Tour will be in Scottsdale, AZ for the Waste Management Phoenix Open, but many of the world’s top players will be joining Woods in Dubai. The next few weeks are important for golfers as they compete for limited spots in the notable World Golf Championships events in March.