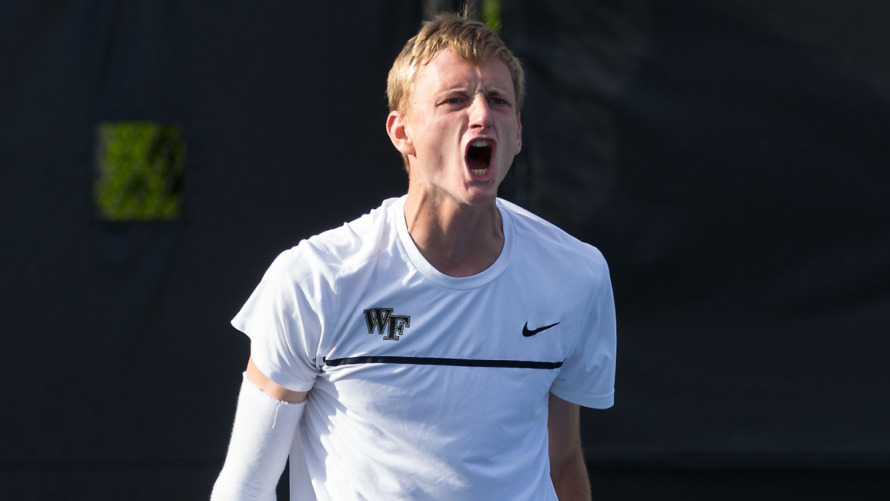 Last year, Wake Forest won both the singles and doubles competitions of the ITA indoor championships. This season, the Deacs will look to send even more athletes to the final rounds, as they continue to assert themselves as a nationally ranked powerhouse.

Ranked first in the country, Petros Chrysochos, from Cyprus, beat Toby Boyer 6-4, 6-2, which set the tone for the rest of the Demon Deacons.

Borna Gojo, from Croatia, followed his teammates victory with an even more impressive showing triumphing 6-0, 6-1, over his opponent Tomislav Antoljak.

Alan Gadjiev, from Uzbekistan, rounded off the team’s performance with a solid 6-4, 6-4, victory over Micah Klousia.

Nebraska, though fighting valiantly, never had the upper hand in the matches and also gave way to our strong squad even in doubles.

The No. 1 ranked doubles team in the nation, Skander Mansouri, from Tunisia, and Christian Seraphim, from Germany, beat their opponents, Boyer and Antoljak, 6-1. Gojo and Gadjiev closed out the competition with a 6-3 win over David Samardzija and Dylan Bednarczyk.

When the going gets tough, the tough get going. This is no cliché saying and it is perfectly applied to this situation — the Deacons swept Georgia State 4-0, securing a spot in the ITA Indoor Championship.

Chrysochos dominated his opponent Zackery Kennedy 6-0, 6-0. Quick on his feet, Chrysochos was always in the right place, thus forcing his adversary to run the baseline.

Clearly, this strategy paid dividends. Mansouri, playing at No. 2 singles, made quick work of his opponent Jannis Koeke, winning both sets 6-3, 6-3.

No. 21 in the country, Seraphim beat Quentin Coulaud, shutting him out in the second set: the final score was 6-4, 6-0.

The doubles matches went in a similar fashion. Mansouri and Seraphim won 6-1 over Kennedy and Koeke, while Gojo and Gadjiev beat Sebastian Acuna and Andrei Andrukhou 6-3.

The Demon Deacons will take two weeks off before they play at No. 12 Oklahoma State, who will surely attempt to avenge their recent shutout.