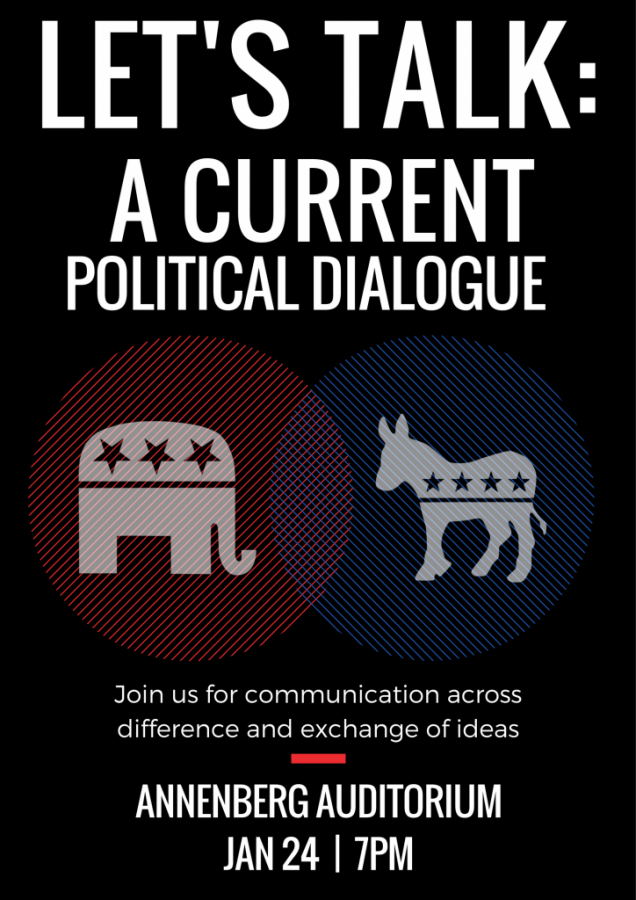 On Tuesday, Jan. 24, 73 students filled Annenberg Auditorium to participate in “Let’s Talk: A Current Political Dialogue,” an event that invited students of all political ideologies and affiliations to engage in conversation across difference in small group settings with faculty and staff moderators.

“We knew that students were discussing the political environment in their own groups, but we hadn’t seen a lot of opportunities for students to communicate across difference and wanted to help provide a space for that,” said Marianne Magjuka, assistant dean of students and director of democratic engagement and justice programs. “Several administrators — Shayla Herndon-Edmunds, director of diversity education; Angela Mazaris, director of the LGBTQ Center; Paige Meltzer, director of the Women’s Center; and Penny Rue, vice president of campus life — came together and started to talk about what a university-wide event could look like.”

The panel comprised of three Wake the Vote students — sophomore David Ajamy, sophomore Zachary Bynum and junior Ryan Wolfe — who volunteered to speak about their experiences communicating across difference.

Alongside a diverse assembly of peers, they devoted time and energy to civic learning, democratic engagement and personal reflection throughout the entirety of the presidential election season.

“I decided to volunteer for the panel discussion because experiences like Wake the Vote have shown me the necessary work of bipartisanship and to question what it truly means to do the work of democracy,” said Bynum, who identifies as a Democrat. “I also think that when we’re getting into serious dialogue, we need to have as many diverse voices as possible.”

Bynum indicated a need for active listening and empathy when engaging in difficult discussions. Wolfe, who identifies as ideologically conservative, echoed this approach.

“People right of center [need] to try to understand the fears and apprehensions of people on the left. It’s okay to want certain things for our country but it’s not okay to think your opponent’s fears aren’t valid,” he said. “I think if we’re going to live as a community we can’t get to a place where people on either side are attacking people personally.”

Student attendees overwhelmingly enjoyed the panel discussion. Though some felt it lasted too long, others would have preferred that it had continued to allow for audience interaction.

“I thought it was very insightful to hear from students who were in the thick of the political arena,” said junior Natalie Casimir who identifies as both a Democrat and a liberal. “Their perspectives were all so unique. Their testimonies generated more questions, though, and not being able to have those questions addressed left me wanting more. I would have liked to have a Q&A session with them.”

Given the unexpected length of the opening discussion, many students left before small groups convened.

“We tried to put students in diverse groups but when some students left after the opening piece, some of that diversity in the room also left,” Magjuka said. “This meant that some of the groups had more robust discussions than others.”

Sophomore Meredith Haley was among the students who left due to a timing conflict. She identifies as ideologically conservative, but most of her friends describe themselves as liberal.

“I enjoy being able to have conversations with [my friends] because otherwise stereotypes get set in stone,” Haley said. “It’s good to try to understand where everyone’s coming from.”

For Casimir, breaking out of her politically homogenous social circle was a top reason for attending the event.

However, “it was fairly evident in my group that most of the students were also on the liberal and progressive side of the spectrum,” Casimir said. “The conversation was productive and worthwhile but I feel like I didn’t get as much of a new perspective as I would have liked.”

Reflecting on this issue, Magjuka said that “after the recent inauguration and the Women’s March, I think having that time to debrief, reflect and talk to other people is still valuable, even if everyone has the same perspective.”

Despite logistical issues and mixed student reviews, most agreed that “Let’s Talk” was an interesting and constructive way to begin addressing campus climate issues.

“In the long run, I want [events like this] to give students the experience of having their perspective empowered but also challenged and analyzed,” Bynum said. “That will be a more meaningful face-to-face experience than talking about a political Facebook or Twitter fight with a couple of friends.”

Wolfe agreed and said he thinks “it’s important for student in leadership positions on campus take the opportunity to participate in events like this to endorse their value.”

Magjuka affirmed that it is also the role of administrators to create intentional spaces for students to engage in dialogue across difference outside of the classroom.

“The skills required to engage with people who have different ideas than you are at the heart of exactly what it means to have a liberal arts education and … at the end of the day, our democracy requires that we’re all engaged,” she said. “I think this event was a good first attempt and hope to see it continue.”