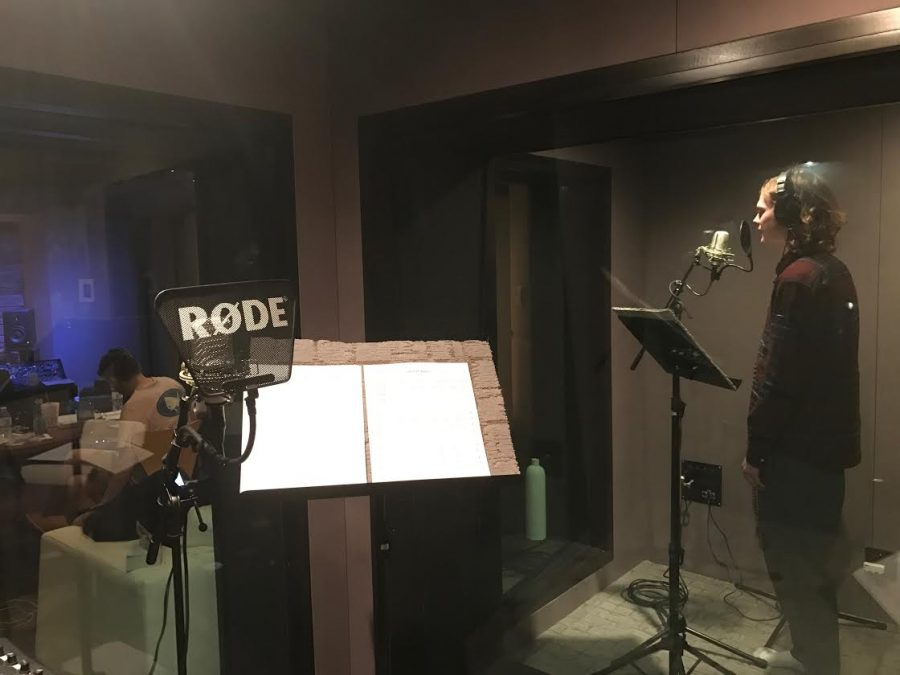 Members of the Christian, all-male a cappella group recorded their 14th album with the theme “finding direction.”

With 25 years of music, ministry and brotherhood under their belt, Wake Forest’s all-male Christian a cappella group has undergone recording and producing their 14th studio album.

The group of 13 students travelled to Nashville in early January to undergo the recording process of their first album since releasing “The One you Call” in 2015. Wake Forest and Chi Rho alumnus, Derek West, now a Nashville producer, worked with the group on the production of their upcoming album.

“It was a week-long process, and we tried to record about two songs a day,” said junior Will Coleburn, a Chi Rho scheduler and member. “It was cool to see how the recording process evolved year-to-year, and see how that changes with what guys step up to the plate — I think that’s the beauty of producing an album.”

A lot of preparation was conducted in advance of the week-long trip, such as choosing what songs to be on the album and taking care of logistics to ensure a smooth recording process.

“Last December was when we started planning this, and between then until around September, we started voting on and making arguments for and against songs to be on the album,” said junior Clay Hamilton, a Chi Rho music director and member.

The group then decided that, considering they are a Christian a cappella group and that college is a really particular time for many people trying to find direction, that the theme, “finding direction” would speak to members of the group and other students.

“I remember throwing around themes, and I was the one that said ‘finding direction’ was a cool one,” Coleburn said. “I think that it spoke to us, and that is when Clay mentioned a song he had in mind, ‘Sailboat’ by Ben Rector, and so that was kind of the first brick laid in the foundation of this new album.”

The crafting of the album went from that groundwork, to all members of the group discovering and choosing songs that could translate well to a cappella arrangements and the theme of “finding direction.”

“We wanted to put together a cohesive project that has a cohesive message,” Hamilton said. “That’s the reason why Chi Rho does what is does — to offer a message by way of the gospel of hope, and in our performances, to make people feel less alone.”

Once in Nashville, producer West, who also works with another Wake Forest a capella group, Minor Variation, in conjunction with Brad Stephenson assisted with the week-long process of recording the album.

“Derek has the studio and all of the equipment for mixing and mastering the pieces for us,” Hamilton said. “Our role is to conceive what songs we want on the album, the purpose of the album and so-on.”

With the background sounds for the album recorded in January, the work on the album is not entirely finished, as members of the group will return to Nashville to complete solo recordings for the album in March. The album title is still being determined, as the a project is still underway and will not be released until Chi Rho’s “Big Concert” on April 22, where the group will perform the songs from the produced album for the first time.

“With it being our 25th anniversary year and the release of our 14th studio album, we are really blessed to have this opportunity to create something I think a lot of college students will identify with,” Coleburn said. “I think this is one of our more contemporary a cappella albums, with a lot more songs people might recognize.”

The consistent project of recording the album every two years has been something that every member of Chi Rho gets a chance to be a part of, rally around and work diligently toward together in their undergrad experience.

“This was a team effort, and I’d like to add that I’m so grateful to be a part of a group of guys that is willing to commit to a project of this size and to one another,” Hamilton said. “Recording is more than choosing songs and learning music — it also means I get to spend a full week with some of the best friends and musicians at Wake Forest, and that experience is just as valuable as releasing a record.”