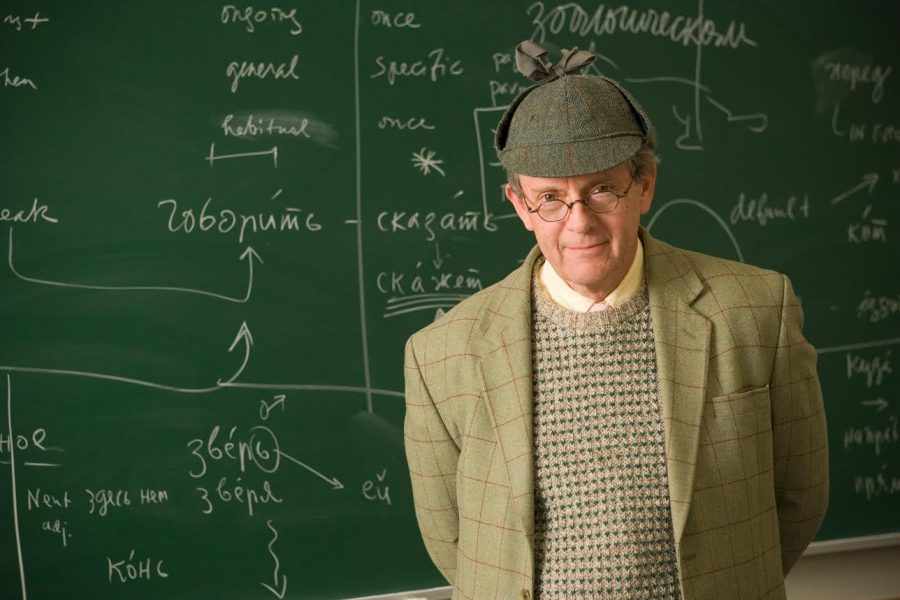 Billy Hamilton, a Russian Professor and member of local bluegrass band Unbroken Circle, has been a member of the Wake Forest community for over 30 years.

Most students may recognize him as the professor that sits in a folding chair smoking his pipe outside of Greene when skies are clear.

How did you make your way to Wake Forest University?

Alright, I got through 11 years of Yale University college and grad school minus the one year I flunked out. I got back in so probably the total number of years was nine or 10. I got one of the last good jobs for Russian professors at State University of New York in Buffalo.

At one point I had a lot of Russian students, but in the late 70’s I had very few. The demand suddenly trailed off. So I agreed to work in the Dean’s office on top of my teaching and did that for a few years and got on board a program, which would exchange administrators for a year to go somewhere else and pick up wisdom and bring it back to their university.

I came here for a one year visit and it was just a coincidence that I had a friend of mine in Buffalo who was coming down to have an interview at UNC Charlotte and I said to the fellow, ‘hey buddy do you know any administrators at a good college in the south. And he said just go to Wake Forest and knock on the door of Ed Wilson. I said ‘is he one of those Christian fanatics?’ And he said, ‘well he seems to be religious but no, he’s not a fanatic.’

I had not figured out what Wake Forest was and I thought it might be one of those bible-thumping schools. So my wife and I stopped here on our way to Charlotte, left the kids in some kind of camp. Ed greeted us warmly and to lunch over in Reynolda Village and we fell in love with him and this school.

We went to see Charlotte, cancelled our reservation for other schools in Florida and decided to cast our lot with this weird place called Wake Forest, which seemed to me oddly charming, friendly and serious.

What would you say some of your hobbies are around campus?

Well, recently — I guess you can consider the music we play as a hobby —  Unbroken Circle, which is a large orchestra of Folk musicians and country singers and pickers does events. There is a benefit concert Feb. 3 at the Byrum Welcome Center for the Shalom Project at the Green Street Church, which is a church downtown that gives food and shelter to those in need. And we’ve done that several years now and it always raises an amazing amount of money for these folks. Usually we can feed everybody for almost a year with the money we can raise. And lately, at my age, I don’t want to run any more bluegrass bands, I just want to be in one. I play the heavy banjo and sometimes they let me sit on the stool because that thing gets too heavy for me to stand up with for two hours or jump around on stage. So that’s a hobby.

Your requisite for doing this interview was that you got to talk about “The Giant Roar.” Could you tell  us about it?

The Giant Roar is a problem for all of the admission folks who lead the tours in and out of Greene. They stand there like airplanes on the tarmac waiting to enter the building while the next group finishes its visit. And they are rendered deaf by the roar of the unique ventilator sucking device that sits in front of the bushes in front of the building, right where everyone wants to sit and talk or stand and talk. And we are all losing our hearing because it roars so loudly.

I have become famous for doing one thing bad and one thing good. One thing bad is that I sit out front of Greene smoking my pipe — but I got an award for doing it from Thrive, which is an organization here that gave me a trophy thing and plaque for perpetuating intellectual wellness by smoking my pipe. The good thing is that when I am doing that I get to talk to people who I would have never had a chance to talk to.

When you’re in your office, you have the student, like you, who is the unimportant guy sitting there talking to the professor, like me, who is the important guy. When we are sitting out front, we are equal. We both sit in our folding chairs that we both bring out from my office onto the grass. The equality thing is very important to me. I don’t think that I am any better or any worse than anyone else who is bearing the name Wake Forest — either as an employee or as a student. I just like the equality part. And it’s hard to execute that under more a vent that has yet to be fixed even though I have tried various suggestions to the university. I think it’s about time for someone to rise up and start a petition.

Do you think there are aspects of this university that have kept you here for longer compared to other universities?

Oh absolutely. I wish you could understand. I’m just going to tell you the difference between Buffalo, where I first worked, and here. The difference is that in Buffalo, at one point I had to be temporarily the main dean for a faculty of 400. It was called Arts and Letters Faculty and we had some hard times up there when the budget was shrinking in the late 70s.

Around 1980, the faculty was enraged because they were going to be cut back in their budgets and couldn’t hire the professors they thought that we should have and couldn’t get new supplies. And they were angry with each other. They would express this anger at faculty meetings by hurling obscenities at each other.

Then there would be a vote and one side would win and then these two guys, who had so respectfully disagreed with each other would go out together and you would see them sitting together having coffee and laughing. It was a difference between disagreement and dislike.

So I felt that here and it’s been true ever since. We still have really good faculty meetings where we talk about important things and nobody hurls any ugliness at anybody else. That characterizes the difference.

Maybe I was just lucky to experience such an extreme version of good when I came here. And maybe it looked good because I was experiencing something quite bad up there at the State University of New York during hard times.