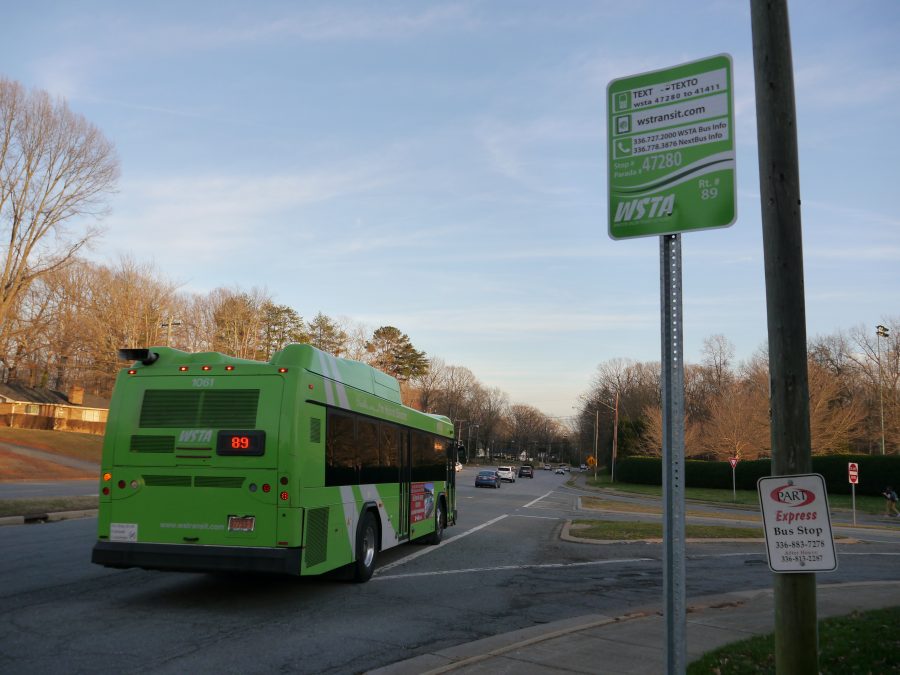 As riders going to work, step off the bus and onto University Parkway, an unwelcome combination of brisk air and morning traffic greet them.

Eyes still covered with a layer of grogginess from the night’s sleep before, the travellers must continue their morning trip across four lanes of racing cars, as the sun only begins to break from the horizon.

“It’s very dangerous crossing that street,” said Wake Forest employee Temple Jones. “Especially if you have to be here at 7, you have to cross in the dark at 6:30 a.m., half sleepy, with the fast traffic.”

Jones has lived in Winston-Salem for over 50 years and has taken the public bus for as long as she can remember.

In December 2015, the Winston-Salem City Council voted to approve new bus routes to become effective a year later, in January 2017. This is the first ever  massive overhaul of the bus system in the decades-long history of the Winston-Salem Transit Authority.

City Councilman Dan Besse is the Chair of the Public Works Committee. This committee helped to redesign and approve the new routes that became effective on the first of the year.

“In a nutshell, the routes had never been redesigned since the system came into existence,” Besse said. “It was an inefficient patchwork of routes. What we did was a comprehensive study of those who use the system and redesigned the routes to add frequency for heavily used routes.”

Since the system’s creation, the busses in Winston-Salem had explicit routes, but traditionally veered away from them. Instead, they would drop individuals where they needed to go. Regular riders on the busses have long relied on them as their main form of transportation around the city.

Councilwoman Denise Adams grew up in Winston-Salem and remembers she and her mother always depended on the busses and their reliance in the city.

“The way the bus used to be routed was that it just meandered its way through the community, stopping wherever people wanted to get off,” Adams said. “It was not efficient or timely. People would get on the bus and never knew where they were going to get off.”

To deal with the gaps in the transit system, the Public Works Committee and the Winston Salem Transit Authority (WSTA) set out to modernize the historic busses.

“The system redesign and new routes are intended to provide better service to more riders, faster transit times and more cross-town routes with fewer transfers,” Besse said. “The shorter ride times will also make it possible for us to improve transit further in the future by adding more frequent service on the most heavily used routes and peak times.”

While these additions to the transit system aim to increase efficiency and customer satisfaction, the routes themselves are the source of the discontent among the riders. As Wake Forest is the sixth-largest employer in the city of Winston-Salem, many of the employees who work on campus rely on public transportation to get them to work each morning.

“A lot of people have lost their jobs just because they can’t get to work on time with the new busses, and now they’re struggling day to day just because they couldn’t get here on time” Jones said. “When the bus doesn’t come, people have to dig into their pockets to pay for a cab, which is very expensive. That leads into a domino effect where you’re always in a bind paying for transportation when you should just be able take public transportation.”

The campus employees’ frustration did not go unheard. During their winter orientation, Jones and her coworkers began a petition to advocate moving the route back onto campus to be sent to the City Council. The petition originally held only signatures from employees, but students were later offered to sign.

Alysa Speas has worked on campus for almost two years, and although she does not take the bus to work, she acknowledges that most of her coworkers are burdened by the change. At her position at the front desk of the dining hall, she greeted students as they swiped in and offered them the option to sign the petition.

“The majority of the people that I work with take the bus, so if it they can’t get here, that means they can’t work,”  Speas said. “Then that means we’re short staffed, which puts pressure on all of us. I know we received well over 1,000 signatures because I counted myself over 700 people in one day and we did it for three days.”

The petition will be sent to correspondents within the transit office, but the City Council is already aware of the complaints. Understanding the safety concerns related to crossing University Parkway and waiting for extended time periods at an uncovered stop, the University has voiced its concerns with the changes.

“We have communicated our concerns for our workers’ safety and convenience,” said Mary Pugel, chief of staff for the office of the president. “We have also indicated in our communications that Wake Forest is one of the largest employers in the city and our service staff account for a large portion of WSTA ridership, so the city is well aware of our concerns for these employees.”

While concerns have been voiced, no direct action has yet assisted the frustrated bus riders. Logistically, to redesign route 89 back onto campus would result in missed connections between this bus and the ones that follow, eventually disrupting six additional routes.

For now, employees have the ability to take the Wake Forest shuttles that go downtown, but for many who do not live in this vicinity, this is not a long-term solution to the public transportation problem.

“For 60 years, the busses never hurt anyone,” Jones said. “Now they’ve really screwed us on this one. I just hope I hope someone pays attention, listens to the voices of the people and return the bus routes back to where they help us, not hurt us.”