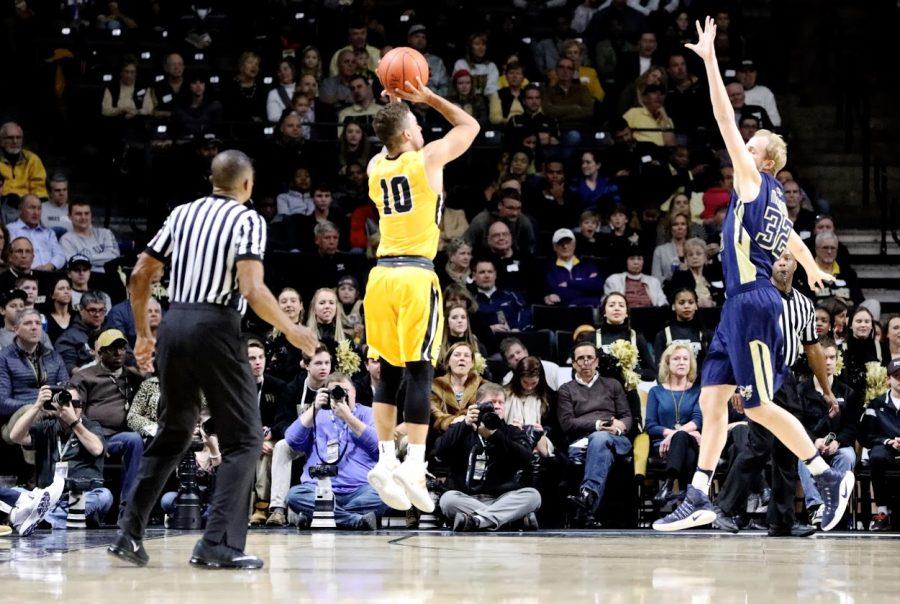 Eighty-one points was good enough for the Demon Deacons to topple the Georgia Tech Yellow Jackets at home on Saturday, Feb. 4, but posting the same number against the Notre Dame Fighting Irish on Feb. 7 didn’t have the same result for the 14-10 Demon Deacons.

In the midst of a tough Atlantic Coast Conference  schedule, the Deacons’ position in pre-NCAA Tournament rankings remained relatively neutral this past week.

In the win over Georgia Tech at home, Wake Forest showed their resiliency and demonstrated a far-too-rarely-shown ability to execute for the entire 40 minutes.

The 81-69 final score represented the first game decided by more than five points for the Deacons since a Jan. 18 96-79 win against Miami.

Being able to close out games and maintain substantial leads has been a consistent problem for the Deacons this year.

The Demon Deacons could blame their late-game troubles on many miscues on offense and defense, but an indisputable issue has been the Deacons’ ability to feed leading scorer and rebounder John Collins in the paint in the last five to seven minutes of the game.

Wake Forest fans have recurring nightmares of ill-advised late-game three pointers clanking the rim while Collins fights for post position inside, failing to get a touch on the offensive end while the opposing team is able to whittle away at a second-half lead.

“For us, we have to continue to move in the direction we’re going.” said Head Coach Danny Manning. “I think our guys are playing hard and doing a lot of good things. We have shown improvement. We’re at a point now when we want that improvement to equal wins. That’s the mindset.”

The winning streak wouldn’t last long, however, as Wake Forest traveled to South Bend to take on a tough Notre Dame team. However, dropping 81 points again wouldn’t be enough, to take down the Fighting Irish. The Deacons fell 81-88 despite another prolific game from Collins, who finished with 24 points and 14 rebounds.

In an all-too-familiar performance, Wake Forest held a 41-36 halftime lead that was destined to be extinguished by the final buzzer. With the game tied at 60 and around nine minutes remaining, Notre Dame took command  with a three-pointer and did not relinquish the lead for the rest of the contest.

Bryant Crawford, who had 19 points in the losing effort, recorded his 16th-straight game with double figures in points.

A win over Notre Dame would have almost certainly vaulted Wake Forest into an undisputed position in the NCAA Tournament. Before the playoffs, though, the Demon Deacons must learn how to maintain confidence in their scheme in the final 10 minutes of the game. Against weaker opposition, Wake Forest will be spared the consequences of poor execution in crunch time, but seasoned, well-coached teams will continue to run circles around the Deacs when it matters most.