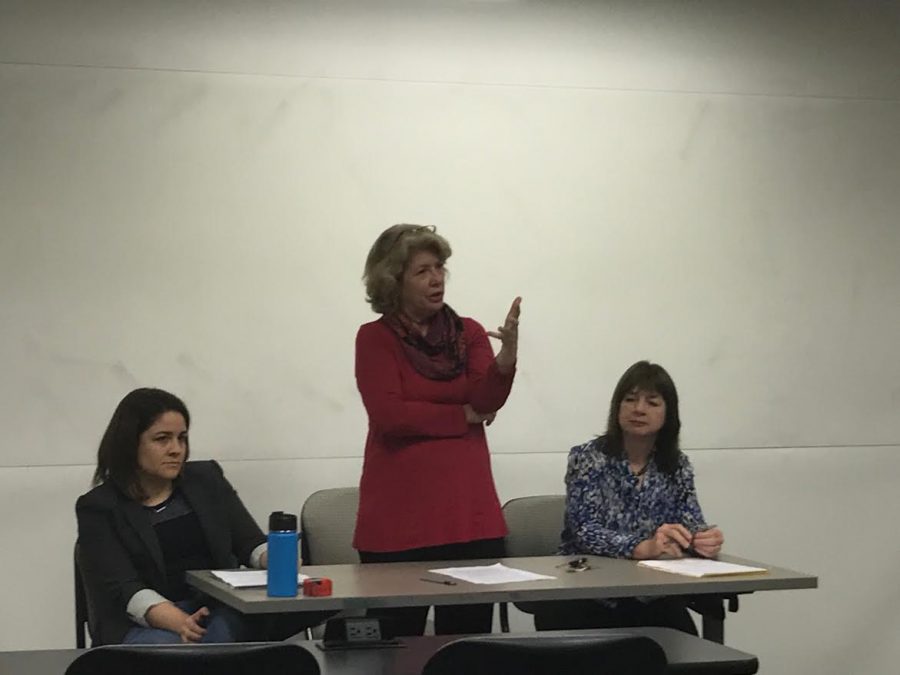 “Due to the fact that Trump’s official 100 days is during finals week, we thought we would get some professors to lend insight on things they think will happen within the first 100 days,” said president of Pi Sigma Alpha Steven Caracciolo.

Smith was also sure to mention that because it has not been near 100 days since Trump’s inauguration, she would focus on Trump’s transition up until Jan. 20. After analyzing differences and similarities between Trump’s choice of timing and people for cabinet nominees, Smith focused on the “learning curve” that all presidents face.

“Every president has a learning curve and we have certainly seen that with President Trump, which is not unusual with a presidency,” Smith said. “No new president has ever been president before.”

Dahill-Brown’s portion of the panel focused on the policymaking tactics that the American people can expect to come out of the Trump administration.

“I’m going to use Trump’s selection of Cabinet members to see what we could expect in terms of his policies,” Dahill-Brown said.

Dahill-Brown explained how a cabinet could be less ‘professionalized,’ meaning members have less credentials of education or experience in government.

“Outsiders can bring in new perspectives, break the status quo and be more innovative,” Dahill-Brown said. “Still, government is complex and there will be moments like we’ve seen with executive orders where there may be gaps in knowledge of the policymaking process.”

Harriger then discussed President Trump’s Supreme Court nominee Neil Gorsuch, and how law-making Democrats are not likely to strike him down, but may delay the process. She also discussed how the increased polarization of politics has influenced the nomination process.

The estimated 50 students and professors who attended the panel were eager to ask the panelists questions concerning the presidency.

“I thought it was awesome, but I wish there was more time because obviously there’s more questions people had,” said senior Bryanna Norwood. “I learned more about the judicial process, as Dr. Harriger said, no one really talks about that as much as we talk about what’s happening on social media and I think it’s nice to get details about that process.”

Politics and International Affairs student Carlo Ballesteros enjoyed learning in-depth analysis of what we can expect from the Trump administration.

“It was done in a way that’s done for political science students,” Ballesteros said. “We’re not analyzing what we like or don’t like about Trump, we’re analyzing how he plans to govern, I think that’s a key component.”