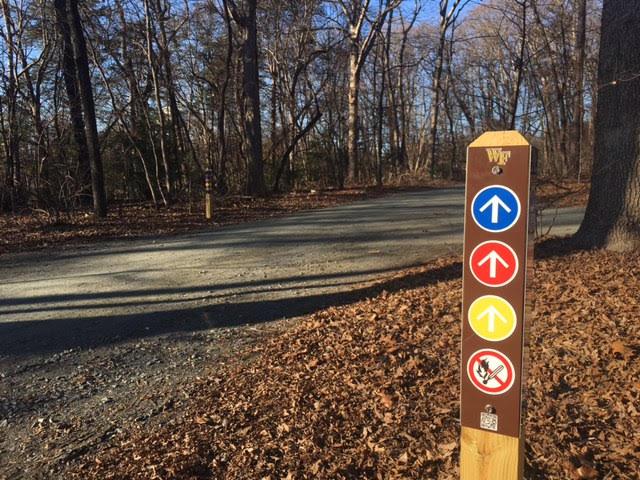 Although the heart of campus seems to be flooded with activity, it is the edges of Wake Forest that are hopping with new additions — beckoning students, faculty and staff to take advantage of improvements to the outdoor campus recreation facilities when weather permits.

The disc golf course that begins behind Martin and extends past Davis field received a much-needed face-lift with new, freshly painted cages among other improvements.    Meanwhile, on the opposite corner of campus, color-coded trail markers, with QR code links to interactive maps, have been installed to provide a roadmap for joggers on the cross country trails behind the Barn.

These new additions are a part of what Director of Campus Recreation, Max Floyd, hopes will get all members of the campus community outside and active together.

With the opening of the Sutton Center and the continued construction on phase two of the Reynolds Gymnasium Renovation and Transformation Project, the indoor improvements are easily visible.

But it is the addition of these two new improvements trickled along the lesser traveled areas of campus that he said have yet to be discovered by most students.

“I think most people just don’t know that they are there,” said senior Martha Schull, talking about the cross country trails that twist and turn between the canopy of trees behind the Barn and Palmer and Piccolo. “And my only qualm is that I get there and start running and don’t know exactly how far I’ve gone.”

The multiple pathway options that can be taken and exact distances traveled are now in place to clarify these distances. Blue arrows lead along the trails for a 1.2 mile loop, red arrows extend onto faculty drive for a 2.23 mile trail, and the longest loop stretches further for a 3 mile circuit.

The trail that winds through the woods is kept tidy by Jim Mussetter, the university’s arborist, who cuts down trees that have fallen and moves them off the path, while the Athletics Department keeps ruts in the path smooth for runners.

“It’s truly a joint venture,” Floyd said, noting the work done on campus that involves many key members of the Wake Forest community. “It’s a collaborative example of how things get done at a university.”

The wooden posts along the trails are now marked by colored arrows. Beneath them, QR codes designed by junior, Carvet Tang, link directly to interactive maps of the routes using any basic QR scanning app.

These interactive maps, created by the Campus Facilities computer assisted design map-building team, are featured on the facilities page of the Wake Forest campus recreation website.

“What I strive for is that we do things the Wake Forest way, which is in the pursuit of excellence,” Floyd said, noting the importance of the partnership with athletics, facilities and the student body to create these new opportunities. “And where you really find excellence here is in the students.”

Senior Matt Avara began his partnership with campus recreation during his freshman year and has since been a key player in the improvements to the disc golf course and the tournament that kicked off this semester.

“We went from five holes that had plastic, gray chain disc cages to nine freshly painted ones with metal, yellow chains that stand out,” Avara said.

In addition to these aesthetic changes, new metal tee box markers were installed in the ground beside posts with visual representations of each hole, distances from posts to cages, and the trajectory that could be taken for the disc to reach the cage.

On the morning of Jan. 28, students and faculty gathered to break in the updated course and spend time outside, snaking through the front nine that begins behind Martin and ends on Davis field.

The course is competitive with other disc golf courses, Avara said. Since the only other one in the area is at least 20 minutes away, the new additions have the potential to create an avenue for community on campus.

“We are thinking of hosting one more Disc Golf tournament later this spring,” Floyd said, envisioning the future use of the outdoor space. “It will be the first ever Cardio Disc Golf Tournament.”

On  Feb. 7, campus recreation gained approval to install the back nine holes for the Disc Golf course that have not previously existed. Two flags mark the spot near the walkway to Reynolda Garden where the first hole tee markers will be placed, followed by eight others that will twist through the trails and end at the water fall on Water Fall Field.

“We are so excited,” Floyd said. “And I know that once the students find out about it, they will be excited as well.”

In the realm of the cross country trails, there is warranted excitement as well.

Loops that weave throughout and around campus ranging from four to 10 miles were laid out in a recent meeting between Floyd and faculty athletics representative Pete Brubaker, in an effort to provide longer paths for long-distance runners.

But for now, the color-coded trail markers are in place and the 12 sets of discs sit in the intermural office, awaiting members of the campus community to step outside and take advantage of them.

“With something like this, you can only hope that the effort, planning, and passion that went into it can be repaid by people simply using it,” Avara said. “And that’s what we’re hoping to see.”