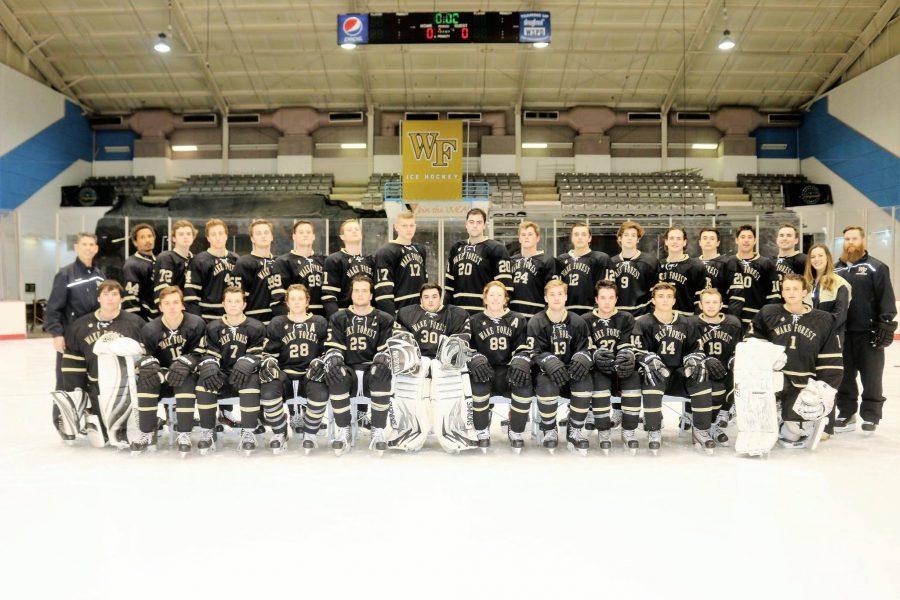 After not qualifying for the playoffs last year, despite their 9-7 record, and losing during the first round of playoffs in the 2014-2015 season, the team is hoping that their high seed, backed by their 17-3-1 record, will carry them far into the tournament.

The Deacs will first face the No. 7 seed JMU on Friday, Feb. 17 at 4:30 p.m. If successful, the team will subsequently take on NC State, a squad the Deacs have already defeated twice this season. The championship game will take place on Sunday, Feb. 19.

At home, the team boasted an undefeated record and finished with the second best record in league play at 7-1-0. Their record won them first place in the Carolina division of the ACCHL. Their only lost this season was to No. 1 seed UVA.

The club ice hockey team is coached by head coach Dave Pasquale and assistant coach Kelly Curl. The Division 2 team is a student-run club, which practices at least two times a week. Seniors Ben Walker and Trevor Incledon serve as the team’s co-captains.

Walker spoke to the cohesiveness of the team as a reason for this year’s success.

“Whether they’re a shooter from the first line or a fourth line guy who’s more of a grinder,” Walker said, “you know that’s been one of our keys to success is everyone just fulfilling their role. We’ve got a very deep and very skilled team and when we play our best hockey it’s hard for any other team in the league to match us.”

In addition to competitive play, the team recently hosted a charity event at their match against Elon, where they raised money to support Hurricane Matthew victims.

“We, along with the coaches, are really working hard with the school and with the community to make sure people know about the team, whether they want to play or support it,” Walker said. “The support really makes a difference.”

The team chemistry has also been a crucial to the success of the season.

“The team is very close, I have to say,” said sophomore Brady Gales. “There’s no one age group that stands out from the rest. From the coaches down, it’s very serious and very competitive. When we’re on the ice it’s practice to win, not practice as a joke.”

When looking to the future of the program, freshman Blake Mueller explains how he looks up to the older players.

“It’s kind of cool to see how dedicated our seniors are now,” Mueller said. “So it will be important to keep the freshmen and everyone else dedicated, committed, focused on our goals to continue what those seniors started and keep pushing the program in the right direction, a positive direction. Keeping and essentially trying to get better.”

Walker concluded by saying, “For the time being we’re just taking it one game at a time, keeping our eyes on the championship, and hoping we can surprise some people in Charlottesville.”