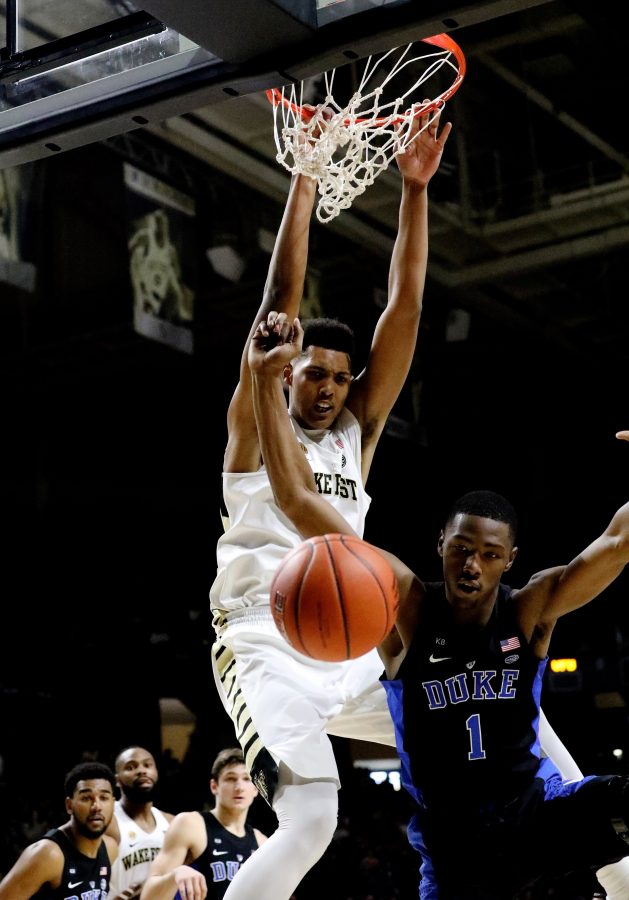 When people think about great college basketball, often the first words out of their mouths are “Tobacco Road.”

This of course refers to the rivalries between Duke, North Carolina, NC State and Wake Forest.

While the rivalry between Duke and North Carolina has become the most prominent of the group and is likely the most important in all of college basketball, it is vital to remember that Duke and Wake Forest actually have the longest standing rivalry of the group.

As the teams prepare to play in Durham on Saturday afternoon, it is hard to dispute the fact that these two teams are as equally matched as they have been in years.

This was proven in late January when the teams met in Winston-Salem. The Deacs controlled the game, leading by 10 for much of the contest, until the final two minutes.

In a scene that has become much too familiar for Deacon fans, the team was not able to hold onto the lead as Duke star Luke Kennard scored 34 points and did not miss a shot in the second half to bring Duke all the way back.

While the loss was certainly devastating, the Deacs have bounced back and played extremely well in almost every game since the Duke loss.

This team has proven time and time again that they can play with any team in the country and I expect the game on Saturday to be no different. While playing the Blue Devils in Cameron Indoor Stadium is certainly a much more difficult task then playing them at home, I believe the Deacs are primed to get the marquee win that they so desperately need.

It will certainly not be easy and it is definitely not probable; however, the Deacs are absolutely due for a toss up game to finally fall their way, so it may as well be this one.

This Duke team is supremely talented, but for whatever reason has not been able to mesh together.

Because of this, it is impossible to know which Duke team will step on the court at any time. If the Deacs are able to come out early and jump on the Blue Devils, it will increase the Deacs’ chances to put themselves in position to win the game.

The keys to the game offensively will be Bryant Crawford and John Collins. Collins will likely be matched up with Harry Giles and Amile Jefferson, two sub-par defenders.

I think the Deacs will look to work through Collins on the offensive side of the floor.

Crawford will also need to have a big game as Duke has no true point guard.

Crawford should be able to control the pace of the game as he wishes and be able to set up his teammates for easy passes.

Defensively, the Deacs need to force Duke to pass the ball inside.

Duke relies on three-point shooting and if the Deacs fail to rotate on screens and put hands in the face of the Duke shooters, then it will be extremely difficult for the Deacs to come away with the victory.

If the Deacs can somehow figure out a way to control Grayson Allen and Kennard, then I believe that the Deacs will be able to finally take down the Blue Devils in Durham for the first time in 20 years.