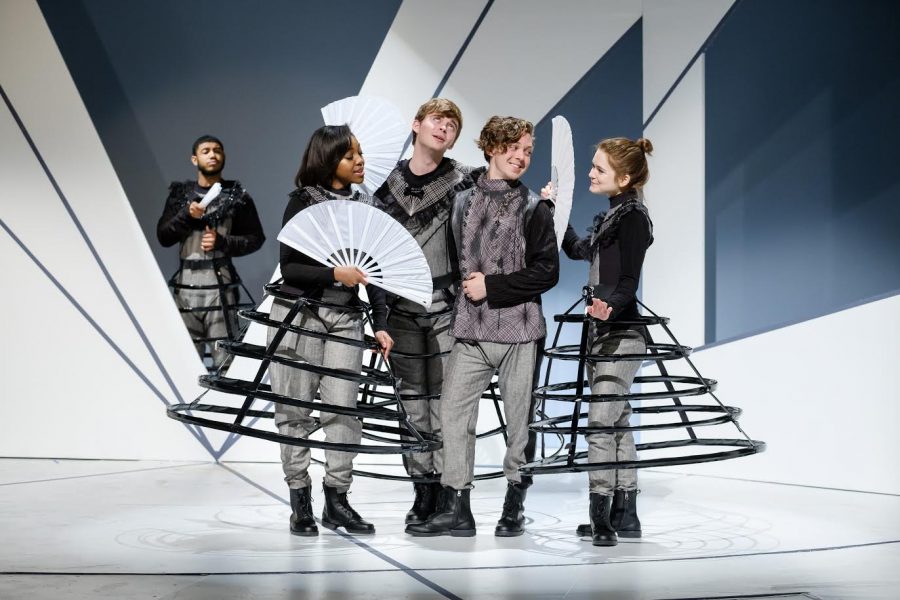 In this devised work of science fiction, audiences assumed the anthropological perspective of aliens who land in America and explore the country’s history of anti-black racism from a “rational” perspective.

Over the last several months, theatre students have collaborated with co-creators Ping Chong, an internationally-acclaimed theatre artist well- known for incorporating media onstage, and Talvin Wilks, a noted director and dramaturg. Chong is in residency at Wake Forest during January and February 2017.

Though the production itself is a work of science fiction, the stories that inform each scene are factual.

The opening scene portrays the 2012 murder of Trayvon Martin, an unarmed black teenager whose death — along with that of Michael Brown in 2014 — inspired Chong to create Collidescope, which ran later that year in collaboration with University of Maryland students.

Collidescope 2.0 ran at University of Massachsetts Amherst in 2016 before the creative duo brought the play to Wake Forest.

“I knew about the production because I remember the company and Ping Chong reaching out to students to ask about their experiences with race relations on campus,” said sophomore Sania Ali. “I provided my feedback, as did many others. Because of that, I had the notion that it would be more catered to things happening on our campus but I didn’t see that reflected other than the one scene in North Carolina.”

Nearly all scenes are set prior to the civil rights movement of the mid-20th century.

“They started with Trayvon, who is an iconic, contemporary case of racial discrimination, but didn’t branch into areas like mass incarceration, police brutality or immigration. I thought the play would build up to that, especially because I think the play’s overall message was that there are these deep, entrenched systems of racism that do not end at 1964,” said sophomore Briana Powell.

During scenic interludes, new “coordinates” of time place, and context flashed on the stage’s backdrop.

“The production and acting were great,” Ali said. “I was confused at first because it was hard to grasp what’s going on from the perspective of the aliens but then it clicked and I think it added an interesting layer.”

“The theatricality of the lighting, the sound and the placement of the actors was very visually interesting and added depth,” Powell said. “It was very dynamic.”

Some scenes were historical fiction, while others included influential black thinkers and activists such as Patrick Henry and Fannie Lou Hamer.

“When a black person from history was played by a non-black person of color or a white person, it was very shocking to me,” Powell said. “Sometimes it felt minstrel-esque. At the same time, there aren’t a lot of black students at Wake Forest in general, so I can understand why that was the case.”

Throughout the play, actors embodied characters with different racial and gender identities.

“The few narratives of black women they had were good and strong, but I would have liked if they touched on our experiences more given the unique intersections of our marginalization,” Powell said.

Despite some critique, Powell still found the experience worthwhile.

“I definitely recommend people see the play,” Powell said. “The actors did a fantastic job and the set was amazing as was the concept. This is such an important conversation to have, especially because we’re situated in a predominantly white, southern university.”

“I think it’s an important production to see, especially if you go with friends and see what kind of discussions might come of it,” Ali said. “Regardless, I would hope that people would watch it with a critical eye. There were some scenes that were very heavy and a lot to process.”

Powell, too, believes the play should provoke meaningful dialogue between students.

“I’m most grateful for the conversations afterwards. I’ve had so many good, deep conversations about it so far and it’s only been a day,” Powell said. “The play is definitely the beginning of a conversation and that’s what’s so great about it.”

Throughout Collidescope’s run, the Interdisciplinary Performing Arts Center has sponsored panel discussions and other related events meant to foster dialogue on campus and within the community.

Following the Thursday, Feb. 16 performance, student activists will discuss their involvement in social justice movements on a panel moderated by Fahim Gulamali, assistant director of programming and student engagement at the Pro Humanitate Institute.

Prior to the Friday, Feb. 17 performance, representatives from Wake Forest, Duke and Catawba College will explore the challenges of addressing diversity and inclusion on college campuses. A reception with food provided by the women of El Buen Pastor will follow.

“Collidescope isn’t something you go to alone and only think about by yourself,” Powell said. “I think the point of it was that they want you to go home and have a conversation about it. You have to delve into it and unpack it. When a piece of art isn’t necessarily complete within itself and it requires your own participation and analysis, that’s the best kind of art.”