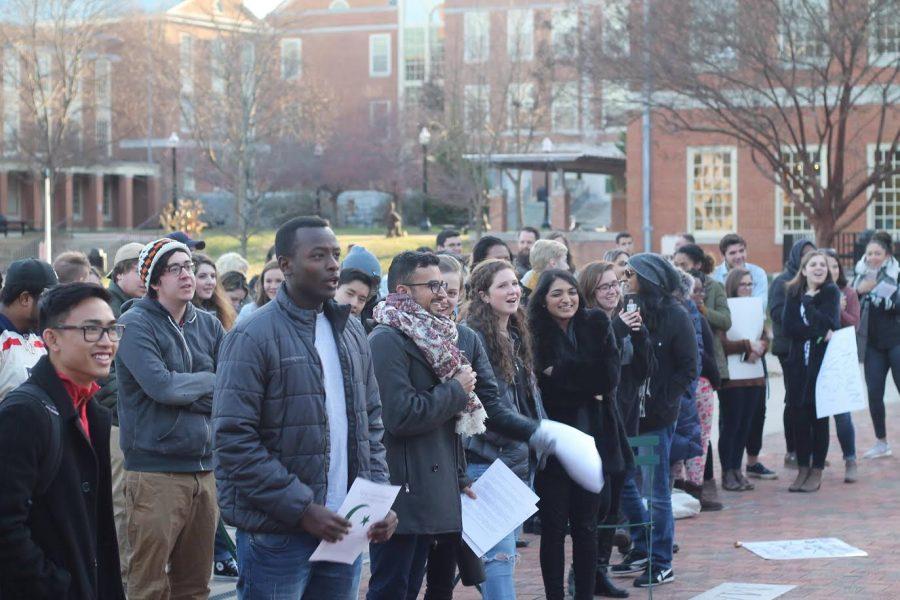 Dozens of students, faculty and staff convened on Manchester Plaza on Friday, Feb. 10 for a speak out in response to recent events that have raised questions about the role of Islamophobia in federal policy-making and campus climate.

According to attendees, the direct impetus for the speak out stemmed from an inflammatory article, “Europe’s Islam problem and U.S. immigration policy,” written by Shannon Gilreath, a Wake Forest professor of law and women’s, gender and sexuality studies.

In late January, President Donald Trump issued an executive order effectively barring entry to the U.S. by people from seven Muslim-majority countries for 90 days and nearly all refugees for 120 days.

Gilreath uses his identity as a gay man to advocate for increased controls on the immigration of Muslims like the ones that result from the order, writing that “Islam is endemically antithetical to the wellbeing of gay people.”

Gilreath also claims that Muslim immigrants have “no intention of integrating into more enlightened Western concepts of equality and tolerance.”

Many students, faculty and staff found his central argument Islamophobic.

She, along with other student leaders in SASA and the Muslim Student Association, orchestrated the speak out in order to create a forum for exchanging narratives and proposing solutions.

“The problem is that Muslims aren’t often humanized and it’s easy to disregard a group of people when that’s the case,” said junior Rakin Nasar. “A speak out allows individual voices and stories to be heard in a way that forces people to engage them.”

Narula echoed Nasar’s concerns. “For students most directly impacted by these policies and political atmosphere, this is not just a one-day Facebook newsfeed thing,” Narula said. “It’s changing my entire future in terms of where I can or cannot live.”

During the event, junior Varun Reddy iterated that Gilreath’s article “breaches the line into ethnocentric, xenophobic criticisms of people who are part of the Wake Forest community.”

Reddy outlined the organizers’ demands “that Dr. Gilreath issue a formal apology to members of our community, that he meet with members of the MSA and SASA communities and that action be taken to directly remedy this.”

“He’s someone who holds academic power and who we came here to learn from. We want the administration to know this is not okay,” Narula said.

Fahim Gulamali, assistant director of programming and student engagement at the Pro Humanitate Institute, was also a member of MSA as an undergraduate.

“I received a voicemail from a colleague in the Office of Student Engagement [that] morning saying ‘our office stands with you and we’re here to show up in any way you want us to.’ That’s an awesome example of allyship,” Gulamali said. “Presence matters. Administrators and faculty have the power to show up in multiple forms if you can’t be there physically you can be on online platforms or talk to students in your classroom.”

The speak out lasted just short of an hour. Audience members were visibly moved by many of the testimonies including sophomore Yaffa Ali’s reading of original poetry.

Ali dedicated the poem to three Muslim UNC students who were murdered in 2015.

“The part of the poem where I talk about ‘wrapping the hijab a little tighter’ is actually from one of their friends,” Ali said. “She recited a poem at a service and I thought it was so powerful. In a way it was perfect that the speak out took place on the exact two year anniversary of that event.”

Ali wants her poetry to redirect hate in order to foster more discussion, and she believes the speak out was successful.

“I felt energized and realized I felt more enraged than fearful about what’s happening,” Ali said. “It was beautiful to have that moment of solidarity together.”

Gilreath’s article was removed from the Wake Forest Law School site but remains on the Washington Blade’s site where it was originally published on Jan. 19. Trump’s executive order is also being challenged in the federal court system.