Elle scholars offer ‘A Seat at the Table’ 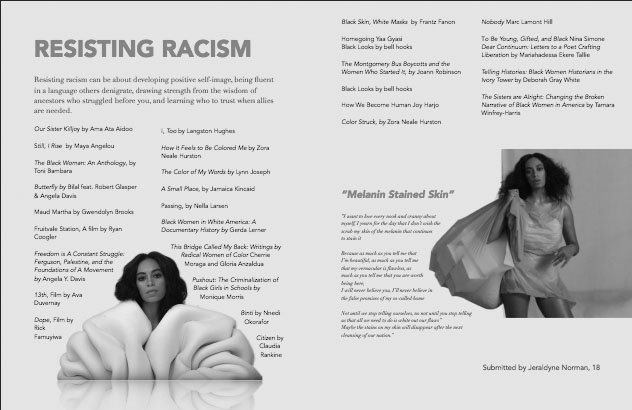 Solange Knowles’ new album A Seat at the Table is an anthem for solidarity, pride and healing — specifically to celebrate the existence and humanity of black womanhood. Recently, a group of women invited other scholars to do exactly this: to offer them a seat at the table.

Five undergraduate women — Lauren Barber, Mankaprr Conteh, Alex Dean, Erica Jordan and Ann Nguyen — collaborated to create and to publish a syllabus to accompany Solange’s masterpiece. The collaborative effort combined literary texts, pieces of music, art and videos to reflect the ideas Solange portrays through her music. The women that made this possible are the ELLE.com scholars.

These scholars are part of a highly competitive undergraduate journalism program, which aims to create content focused specifically on girls and women of color.  They are taught under the expertise of Melissa Harris-Perry and Sherri Williams as a subset of the Anna Julia Cooper center.

After the group travelled to Stanford in the fall to participate in conversation with Solange, senior ELLE scholar, Ann Nguyen, suggested the idea of a syllabus for her new album, designed after Candice Benbow’s famous “Lemonade Syllabus.”

“The ELLE scholar program aims to center young women of color, which is exactly what the syllabus aims to do,” Nguyen said. “This syllabus frames young women of color as readers; readers of really important texts meant to create change not only in society but in ourselves.”

The “A Seat at the Table Syllabus” published on ELLE on Feb. 10 was a collaborative effort by the five scholars. It is respectively divided into five sections central to the album, each chosen by an individual scholar: resisting racism, understanding gender and sexuality, the role of relationships, nurturing ourselves and a section for young girls of color.

“It was a two part collaboration both between the ELLE scholars but also collaboration with complete strangers,” said senior ELLE scholar, Mankaprr Conteh. “Solange talks about how her conversations created her album, and we wanted that to be a part of the syllabus, so we reached out to strangers ages 16 to 30 as well as to famous people to add their voices.”

After hundreds of submissions, the five scholars were responsible for filtering through the provided texts and deciding which were central to their message; work that took them weeks to compile the final project.

However, the work done by these women was falsely reported by news organizations. BET published an article falsely stating that Solange was asking for submissions to create a collaborative syllabus. Essence magazine reported that Wake Forest was introducing a course on the new album. Even student news organizations reported on the new, benchmark Solange course coming to campus.

“False reporting is frustrating because nobody reached out,” Nguyen said. “We’re out here trying to help young women of color uncover and guide their inner truths. How can we do so effectively and authentically when truth is not the priority of the people reporting it?”

The “A Seat at the Table Syllabus” is not one that college students typically picture. It does not include dates for exams, quizzes or papers — it is not even for a real course. Instead, it offers scholarly submissions of texts and multimedia that align with Solange’s messages in her album. The article published on Elle.com never implied plans to begin a Solange course at Wake Forest.

“Like Solange, we asked young women to think deeply about resisting racism, understanding gender and sexuality, the role of important relationships in their lives, and how they nurture themselves,” wrote the ELLE scholars online.  “Some of the submissions were books and articles we expected; but some submissions were original artwork, poetry, and stories.”

Upon recognizing the fundamental misunderstandings about the syllabus, the ELLE scholars reached out through various online platforms to increase visibility and offer clarification. Before the Grammys, they live tweeted for an hour about the syllabus. They also did a Facebook live event answering questions and offering insight into the process.

At the heart of the “A Seat at the Table Syllabus” is the idea of crediting the voices of those who often get their voices taken away, while using Solange’s album as a guide. As her album explored both the joys and the pains of black womanhood, the syllabus aims to echo these pursuits.

“I was inspired by hearing Solange explain how she created ‘A Seat at the Table’, and how it was such a public representation of who she was as a private woman,” Nguyen said. “What it is to me, is a representation of public art, public text that’s available to anybody who wants to read it; to help them make sense of their own private lives and the complexities of being a woman of color.”