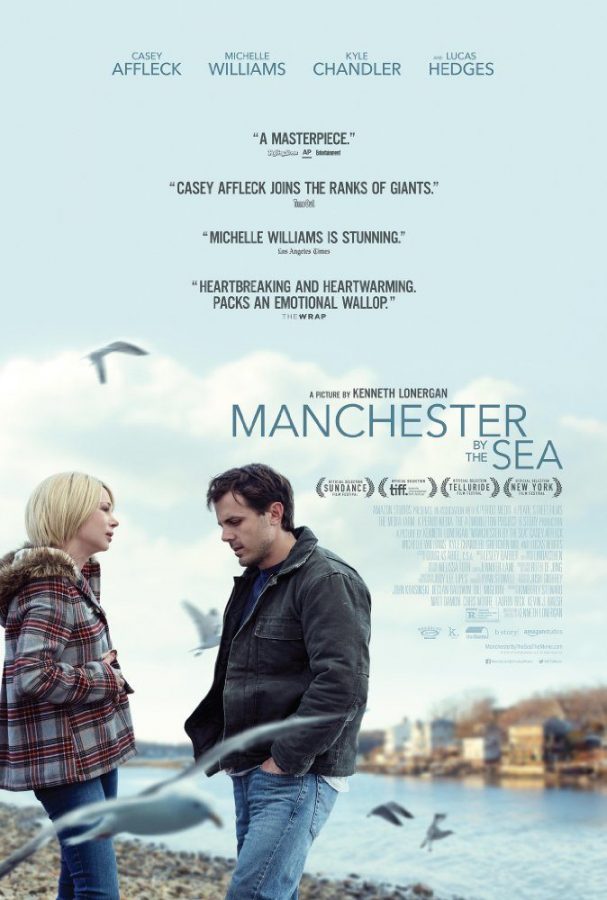 With the Oscars just around the corner, Manchester by the Sea is certainly not a film you should miss.

The tear-jerker starring Casey Affleck, Michelle Williams and newcomer Lucas Hedges, received an astonishing six nominations at the 89th Academy Awards. It is clear that Manchester by the Sea has taken the world by storm. Yet along the way, it has also ripped out the hearts of millions.

The movie is gut-wrenching from start to finish. It begins with scenes from the devastatingly average life of a man named Lee Chandler (Affleck). The first five minutes are inherently boring, which is surprising to see in an Oscar-nominated film. Yet, the mundane beginning gives the audience a glimpse into the reality of this man, who lives in complete isolation and bitterness. But soon enough, the action begins. Lee’s brother, Joe, dies suddenly as a result of a heart condition. Lee is forced to return to his hometown of Manchester in order to take care of his nephew Patrick (Hedges).

We learn through flashbacks about Lee’s past in Manchester. The only joyous scenes in the whole film come in the form of these flashbacks, as Lee was once settled down with his wife, Randi (Williams) and their three children.

However, an incomprehensible tragedy struck the couple leaving them devastated and broken. Unable to reconcile his marriage, Lee fled Manchester and began the sullen, lonely life we witness in the first few minutes of Manchester by the Sea.

Only now is Lee returning to the place that once caused him so much pain. He moves into his brother’s house and contemplates becoming the legal guardian of Patrick. The relationship between Lee and his nephew is one of the most heart-breaking, yet beautiful parts of the film.

Both Lee and Patrick are struggling in their own ways; however, it is difficult for them to truly comprehend one another. The beauty comes from their desire to be there for each other, but the devastation arises when they realize that in the end, their problems might be unfixable.

This same sort of hopelessness can be seen in Lee’s relationship with his ex-wife, Randi. The two meet on the street in Manchester and the interaction between them is one of complete and utter brokenness. Through sobs, Randi tries to apologize for her actions so many years ago. Lee’s only response to her heart-wrenching words is “There’s nothing there.” For him, there truly is nothing there. It is in this moment that the audience realizes Manchester will never be the same for Lee. A place that once brought him so much happiness now leaves him speechless in the name of his grief. Although he wants to be there for Patrick, he cannot overcome the pain that resides in this town.

Manchester by the Sea is certainly not a sad movie with a satisfying ending. Rather, it is a film that leaves the viewer in a state of melancholy. The harrowing idea that you cannot always return home lingers for days after the final credits.

I give Manchester by the Sea a 9/10 rating as I was so impressed by the incredible story line and arguably more incredible acting. In my opinion, few films have been able to so poignantly display grief and sorrow while also alluding to the idea that such despair may never subside completely. Although it may be tough to sit through at times, Manchester by the Sea is so much more than just a sad movie — it is a movie that shows us what it is like to live in sadness.