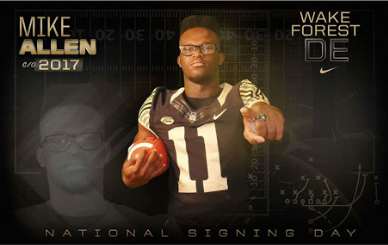 While it’s imperative to get highly touted recruits, it’s also key to have coaches with the ability to recruit talent.

The concern for the latter for Wake Forest came after the departure of Defensive Coordinator Mike Elko, a talented game-planner, recruiter and development maestro.

Leaving a sizable void, head coach Dave Clawson filled the vacancy with Jay Sawvel, a former Defensive backs coach and Defensive Coordinator for a University of Minnesota football defense that was 21st in scoring defense (22 points per game) and 21st in total defense (348 yards per game) in 2016.

Wake Forest will continue to be a developmental type of program with the addition of Sawvel to fill the vacancy left by Elko. Sawvel was widely considered to be the most talented recruiter in the Golden Gopher’s coaching group, which should bolster the upward recruiting trend Wake Forest has been enjoying recently despite the loss of Elko.

At Minnesota, Sawvel had a defensive back drafted every year from 2011-2015, with players that were either two or three star recruits, a similar situation to Wake Forest’s recruiting talent that they attract. Sawvel was choosing between three jobs (two in the ACC, one in the BIG 10, per Joe Christensen of the Star Tribune) when he chose Wake Forest — a testament to his reputation across the nation as a gifted defensive mind and developer of talent. Recruiting-wise, the hire of Sawvel by Clawson should reassure fans that there will still be a great recruiter to find and develop talent on the defensive side of the ball.

In regard to the numbers, Wake Forest’s 2017 Football class isn’t going to jump off the page. 247Sports.com and ESPN has the class ranked 65th in the nation, and Rivals ranks it at 74th. But this is a class that addresses many of the remaining needs that are left by graduating seniors and existing roster talent.

Linebacker talent, explosive talent on offense with three wide receiver recruits 6’3” or taller and a four-star defensive end headlines this group for the class of 2017. Here’s a look at five recruits with high potential for the Wake Forest program:

1. Michael Allen, DE: The highest recruit of the class with 29 offers from programs including Alabama, University of Southern California and Florida State, Allen brings an immediate pass-rush threat to the defensive end position that is already relatively deep for Wake Forest. Look for Allen to potentially see significant time in a rotation with Duke Ejiofor and Wendell Dunn in his first year in Winston-Salem.

2. Jeff Burley, LB: With offers from Wisconsin, Mississippi State and Ole Miss, which pursued the Mississippi native aggressively until singing day, Burley was an important recruit to keep for the Wake Forest coaching staff. Clawson has drawn parallels between Burley and graduating senior, Marquel Lee. Given that Wake Forest is graduating two seniors that started at linebacker, it wouldn’t be surprising to see the athletic, hard-hitting Burley see playing time early in his career.

3. Tyriq Hardimon, CB: Wake Forest fans can largely thank the firing of Berkley head coach Sonny Dykes for the addition of Hardimon to the 2017 Deacon class. The combination of solid coverage skills and outstanding open-field tackling ability should allow Hardimon to see a lot of playing time in his freshman season, with even the potential to start given the graduation of seniors Ryan Janvion and Brad Watson in the secondary.

4. Christian Beal, RB: An explosive runningback, Beal would make a nice complement to the power style of Cade Carney. Beal was featured as a slot receiver as well as runningback for his high school program and brings a speed that Wake Forest currently lacks at runningback. Beal is a laterally-quick back with good hands that should thrive in Wake Forest’s spread offense.

5. Waydale Jones, WR: Catching our attention with a breakout campaign during his senior season, the 6’4” Jones brings a much needed deep ball threat to our evolving offense. It might take a couple of years, but his athleticism could be a difference-maker as an receiver for the Deacs.