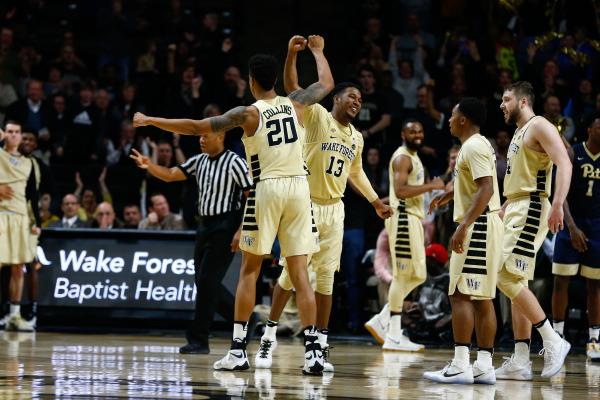 It took a few possessions for Wake Forest to find its groove as the Deacs found themselves down 8-0 in just a matter of minutes.

However, consecutive looks to John Collins in the paint and a no-look pass between the legs from Bryant Crawford gave Wake Forest the energy it was missing.

However, this energy was only momentary as the Deacs struggled to find any offense from players other than Collins. Wake Forest ended the half trailing Pitt 36-24, largely due to its eight committed turnovers. As a means of comparison, the Deacs committed just four turnovers for the entire game against Duke on Saturday Feb. 18 in Durham.

Wake Forest made its comeback in the second half, cutting a 19 point deficit to three points on more than one occasion before finally sealing the game for good behind the play of Collins. The comeback tied for the largest in program history.

The biggest play of the game came with 1:35 remaining when Collins recorded an offensive rebound on a missed Keyshawn Woods three-point attempt. Collins came down with the rebound, put up a field goal attempt, missed, got his own rebound and then finished the play to give the Deacs their first lead of the game. Pitt recovered and converted on two free throws on the other end to tie the game back at 59.

Collins had a chance to retake the lead on the following Wake Forest possession but failed to convert from the free throw line.

On the ensuing Panthers possession the Deacs were able to get a stop and Crawford pushed the ball down the court and took the ball to the rim, only to miss and have his shot cleaned up by Collins.

Crawford and the Deacs could have held the ball for the final shot but decided to attack the opening in the Pittsburgh defense. This proved to be a good decision as the Deacs were able to hold the Panthers on the defensive side of the ball and send Childress to the line to seal the game to the final score of 63-59. Collins played limited minutes in this one as he found himself with four fouls with more than eight minutes left in the game. However, his production did not lack. The talented sophomore finished the game with yet another 20-point performance, finishing with 22 points and 13 rebounds. Wake Forest will have the weekend to rest and prepare for the Louisville Cardinals who will come to Winston-Salem next Wednesday March 1 to face the Demon Deacons at the Lawrence Joel Veterans Memorial at 9:00 p.m.

On paper, the Cardinals are not the best match up for the Deacs, but that is not to say that another strong performance from Collins supplemented with the play of Crawford, Mitoglou and Woods couldn’t pull off the upset.