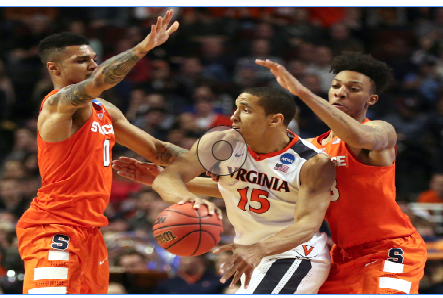 What in the world has happened to the Virginia Cavaliers down the stretch?

The Cavaliers have dropped five of their last six games, incuding their past two against North Carolina and Miami. This past Saturday, Feb. 18, Virginia took to the road in Chapel Hill against the North Carolina Tar Heels, eventually falling to the ‘Heels by a final score of 65-41. Carolina was led by junior forward Justin Jackson who put up 20 points in the blowout. The Cavaliers dismal offensive effort was capstoned by Marial Shayok and London Perrantes who dropped 13 and 12 points, respectively.

Looking to rebound on Monday, Feb. 20, Virginia hosted Miami in Charlottesville in what turned out to be yet another woeful offensive performance, eventually falling to the Hurricanes in overtime by a final score of 54-48.

The Hurricanes were led by guard Bruce Brown’s 10 points while the Cavaliers only bright spot was Devon Hall’s 15 point contribution.

Atlantic Coast Conference play was capped off on Tuesday night with two blockbuster bubble team matchups. To start, Clemson travelled up to Blacksburg to take on Virginia Tech in Cassell Coliseum. The Hokies ultimately hit a timely three pointer down the stretch, winning 71-70.

Virginia Tech was powered by Zach LeDay’s 19 points along with Justin Bibbs’ 12 points in way to the win. Clemson was led by Marcquise Reed who contributed 18 in yet another close Clemson loss, all but killing Clemson’s NCAA Tournament at-large bid hopes.

In what has been a very strange season for the North Carolina State Wolfpack, they can find some solace for their program and ousted head coach Mark Gottfried after Tuesday night’s 71-69 win over upward trending bubble team Georgia Tech in Atlanta. The ‘Pack were led by guard Terry Henderson and Dennis Smith Jr., who added 21 and 18 points, respectively. The upstart Yellow Jackets were pushed by Josh Okogie who put up 25 points in the close loss.

Some games to look forward to for the upcoming week include Duke at Miami on Saturday Feb. 25, Syracuse at Louisville on Sunday Feb. 26 and North Carolina at Virginia on Feb. 27.

The suddenly surging Hurricanes of Miami have yet another chance to make noise and improve their seed for the upcoming NCAA tournament this Saturday against Duke. Look no further than Davon Reed and Ja’Quan Newton to matchup with Grayson Allen and Luke Kennard in what are no doubt two of the best backcourts in the conference.

In a matchup of former Big East Conference giants, the Syracuse Orange travel to Louisville to compete with the Cardinals in the KFC Yum! Center on Sunday night. Look for Louisville’s dynamic backcourt duo of Quentin Snider and Donovan Mitchell try to break down Syracuse’s famous zone defense, while Andrew White III will try to lead Syracuse’s offense to the upset in Kentucky.

Finally, on Monday night, the Virginia Cavaliers will try to shake themselves from their late season freefall as the mighty Carolina Tarheels come to town. If the ‘Hoos have any chances in this one, their offense will have to wake up from their long winter hibernation in order to keep up with North Carolina’s efficient offensive attack.

Watch out especially for the London Perrantes-Joel Berry II matchup in the backcourt as it could be paramount as to who walks away victorious from this one.