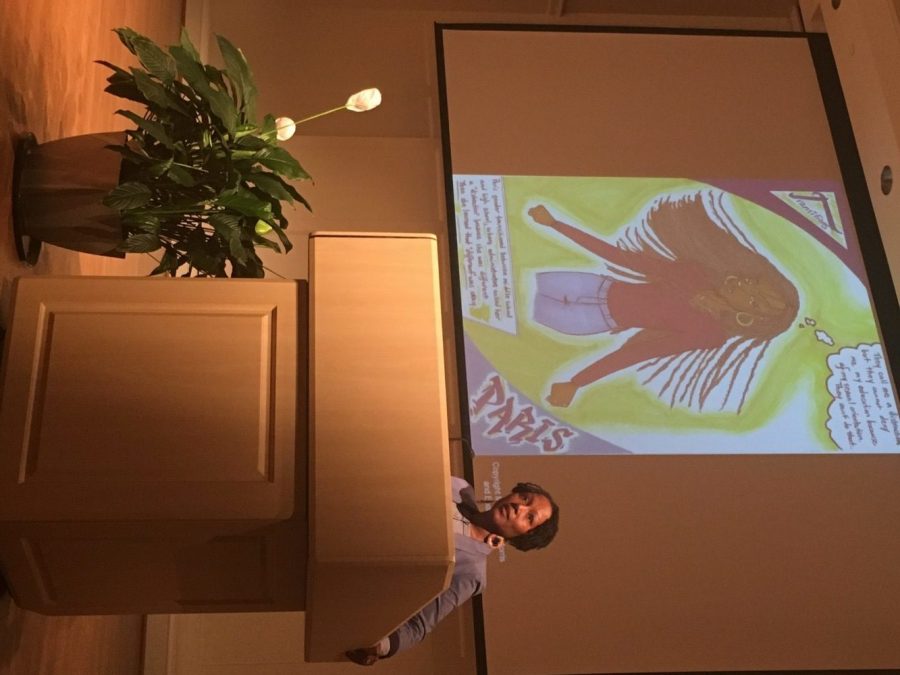 Each year, the Anna Julia Cooper Center (AJCC) at Wake Forest hosts a distinguished scholar, activist or artist to address the university and broader community.

Because Cooper was a teacher, it is an annual tradition for a student scholar to share a speech of their own. This year,   AJCC’s communications intern, senior Mankaprr Conteh passionately delivered her senior oration before founding director, Melissa Harris-Perry introduced Morris.

During her introduction, Harris-Perry characterized Morris’s latest book, Pushout: The Criminalization of Black Girls in Schools as a work that “radically engages the story that policy-makers have been telling about who is vulnerable and why.”

Pushout addresses the disproportionate discipline black girls experience in U.S. schools and its subsequent impact on their education and well-being.

Morris noted that discourse concerning the “school-to-prison pipeline” was framed according to the conditions of boys and young men.

“For girls, the process is not as linear as a pipeline might suggest,” she said. Instead, Morris uses the phrase “school-to-confinement pathway.”

“When I talk about this, I mean the practices and prevailing consciousness that facilitate criminalization in our schools and that render young people vulnerable to contact with the juvenile and criminal justice systems in the future.”

Morris then prodded the audience: “What is this criminalization? What does it look like for black girls?”

She began with a condemnation of zero-tolerance policies saying that in 22 states it is illegal for a student to do things such as “act annoyingly” or “interrupt a teacher.”

“What we’ve also learned over the past 20 years in the implementation of this [zero-tolerance] theory is that though it is race-neutral at the surface, it is deeply informed by race and gender in its application,” Morris said.

She presented data showing that the direct consequence of these policies, whether concerning attendance, conduct or dress code, is the disproportionate administration of out-of-school suspensions and expulsions for black girls.

She also cited evidence that this trend begins early. One study she mentioned found that 54 percent of black girls enrolled in a pre-school experience one or more out-of-school suspensions, far beyond the rate of their non-black peers.

With the rise of smartphones, video footage of violence toward black girls in schools has become increasingly ubiquitous, she said.

“The public often asks the wrong question: ‘What were [those girls] doing?’” Morris said. “As though it is somehow justifiable to ever toss a child across a classroom or slam her to the floor.”

She explained that this and other forms of mistreatment and neglect in schools leads black girls to avoid school entirely.

“A lot of girls get kicked out of school for not going to school,” Morris said. “When we talk to girls about their chronic truancy … they just feel like ‘they don’t want me there so why should I go? If I see something wrong I’m going to speak out about it and get into a fight with the teacher.’”

“This active truth-telling is celebrated during Black History Month when we talk about tremendous women like Anna Julia Cooper, but then when black girls try to tell their truth in real spaces we label them as combative, defiant, sassy and somehow not worthy to be in our spaces,” she continued. “If their sassiness is perceived as routine…we sometimes relocate them into institutions that push them out.”

This phenomenon resonated with sophomore Mackenzie Wilkins. “The way that black women especially are seen as hostile when they speak their minds about things is completely unfair, but it happens all the time.”

Throughout the evening, Morris integrated the individual narratives of young and adolescent girls she has met through her work. Many of their stories shine light on the sexual abuse-to-prison pipeline.

“There is now a recognition that the vast majority of girls who are in contact with the juvenile legal system are girls who have experienced some form of sexual victimization,” Morris said. “The inability for systems, structures and individuals to respond to that victimization produces coping mechanisms that are criminalized rather than treated or engaged for healing.”

She articulated that educators need to not only learn to recognize signs of trauma but think about trauma as something that goes beyond the student as an individual.

“It’s also about the trans-generational trauma we see playing out in the communities, homes and schools where young people are learning,” Morris said. “With black girls, when we talk about creating healing-informed spaces, we have to acknowledge … that they often come from communities where schools have been a part of the tapestry of harm in their lives. It should force us to be different educators.”

Many students in the audience came with a specific interest in the U.S. education system.

Wilkins is currently enrolled in a “teaching diverse learners” class and is a member of Students for Education Reform.

“I’m even more excited to read her book for class now,” she said. “I was awestruck. Everything she said ties into the idea that black women in general are the most overlooked population in this country. The fact that she wrote a whole book about black girls is amazing to me.”

“I came to this because I’m interested in where black women fit into the picture of public education but also because my mom is a truancy specialist for a cluster of public schools in my hometown,” she said. “Hearing [Morris] talk about how people like my mom or administrators can help these girls was fascinating. She also confirmed a lot of what I already know. That these girls are often sexually or physically abused at home or in their communities and it manifests in the classroom. There’s definitely a domino effect.”

Toward the end of her lecture, Morris offered numerous intervention strategies but with a caveat.

“I want to be clear that when we implement these strategies through a lens and practice of love that is when we start to see the differences,” she said. “If we produce alternatives but still engage in punitive overrides … it will not be very effective.”

Morris closed reflecting on the nature of school and juvenile justice reform.

“To me, this is ultimately a practice of engaging education as a freedom issue and thinking about freedom as the absence of oppression,” she said. “If we think about this work as being ultimately anti-oppression work there is no space for oppression — only for healing and learning.”