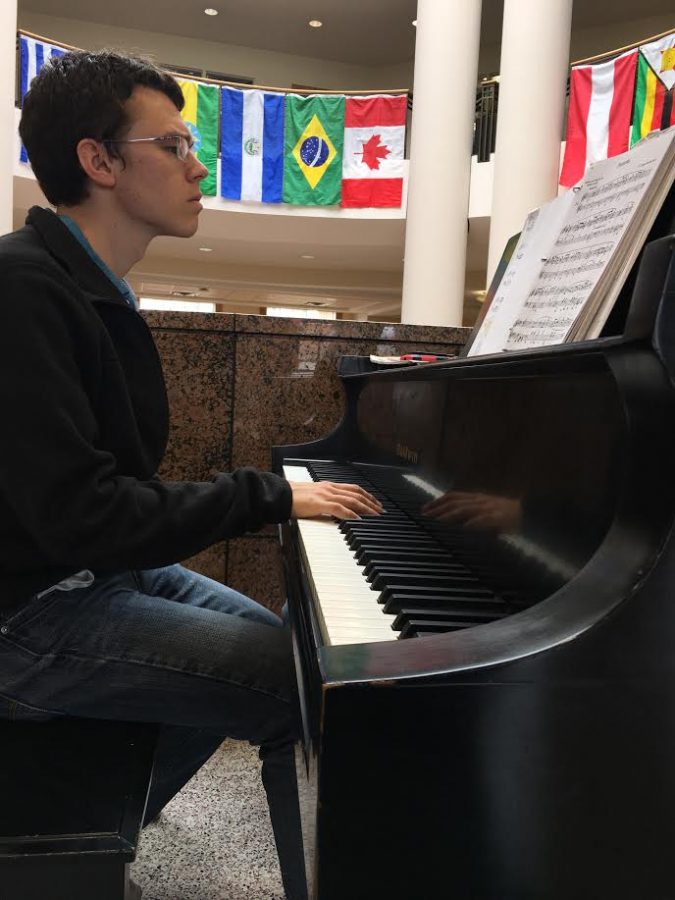 Sophomore Myers McKinney, from Spartanburg, South Carolina, is recognized around campus for playing the piano outside of Subway, and more recently, in Benson.

He is one of three students hired by The Office of the Dean as a part of a mental health initiative for campus. The Old Gold & Black sat down with McKinney to hear about how he began to play the piano and what it has been like to play so often on campus.

When did you first learn to play the piano?

I played guitar starting in fifth grade and  started the transition into piano by the time I was in eighth grade. It really started after I watched the movie The Sting, it’s an old 70’s movie. It had really cool piano music in it, so I sort of fell in love with it and took it up after that.

I thought to myself that I wanted to play the music from the movie really badly. It’s ragtime technically — it’s a genre that’s sort of like a precursor to jazz. The main composer in that is Scott Joplin and he sort of inspired it. I don’t know terribly much about it, but he’s the main king of ragtime. It’s from the early 20th century, really early.

What motivates you to continue playing in college?

I do really enjoy it, but the other thing is that I developed a good ear, to the point that much of what I play is not what I learn from reading sheet music, instead it’s more from songs I hear on the radio and songs I listen to in my spare time.

If it’s a song that’s stuck in my head, I can listen for the chords and melodies, and it’s sort of like an itch you can’t scratch until you figure it out. So that’s what motivates my time playing. A lot of times I won’t have sheet music. It’s just something I’m constantly learning and something I’ve learned over time.

What do you enjoy most about playing in public?

My favorite thing about playing the piano is just the idea of it. Someone will come up to me and say, ‘hey, you know, you really made my day,’ or, ‘I really like that song, I really like that piece,’ — something along those lines — and that really means a lot. I do it through the Office of the Dean and the whole idea of it was to contribute to the mental health of the general college environment. The idea that that actually works, that in some small way I can actually help people live their day, that’s really special.

Do you usually play on a scheduled rotation around campus?

I play about four hours a week. On Mondays, I play 11:00 a.m. – 1:00 p.m., on Tuesdays 10 a.m. – 11:00 a.m. and on Wednesdays 12:00 – 1:00 p.m. So four hours total, with two hours on Mondays. I hope they move me back outside because it’s unbelievable weather right now. Originally they had me playing outside of Subway. They had an electronic keyboard out there that was solar powered or something, and that amps around the quad. They moved me into Benson once it got colder in late November, but I hope they move me back outside.

What type of music do you enjoy playing most?

I really like and enjoy Chopin’s music. I’ve played a number of his Masurkas and Nocturnes. I also take piano lessons here at Wake  Forest through the music department, so sometimes I play whatever my professor has me playing, like Beethoven, Debussy, things like that. Those are sort of the fruits and veggies of being a pianist, they help everything.

I split about half my time between music that’s learned traditionally through sheet music, and then music that I personally listen to. You’ll hear a lot of 21 Pilots and another personal favorite of mine is Switchfoot. So if you hear one of those two, there’s a 90 percent chance that it’s me playing. I’ll also play music that I hear at church and at RUF. The purpose is just to cheer other people up and cheer myself up too.

Do you ever plan to compose your own music?

I’m taking music theory at the moment, and I’ve learned so much. It’s so interesting how music gets constructed. A couple times, I’ve been assigned to write a piece with this many measures in this form, and it takes a lot of work, but I could see myself trying [composing]. I’m really close to getting the music minor, so I’ll probably go for that. Then, whenever I graduate, if there’s some cool opportunity that I might not be aware of right now, I’d certainly check that out. I love the implications for down the road.

What goals do you have when you play?

I just want other people to enjoy it — that’s what this whole thing was all about — playing music for people so that I can sort of brighten their mood and make an impact and stuff. That’s all I wanted it to be; I wanted it to be a chance for me to have fun and improve other people’s days.

How did you find the opportunity to get paid for playing on campus?

I saw a flier in Scales and it asked if I wanted to practice for a job, or something along those lines, and so I contacted them and started. I did audition, so he thought I was good enough.

There are two other pianists hired by the Office of the Dean, and I’ve met them once. Last semester we did a piano duel thing with Christmas music and they’re doing more things with that, which is really cool. They were trying to build more of a community around the idea, but it is a thing that they try to expand and it’s been pretty successful.

What’s the weirdest or funniest experience you’ve had through your job?

One time, I was playing the Police or something, and I remember the chairman of the whole music department, Stewart Carter, stopped and looked at me for a long time. I’ve met him and I’m friendly with him. It was just funny because I wasn’t sure if he was impressed or disappointed that I’d stooped to playing the Police. That was a kind of funny experience.

Any time that friends or someone I know stop and talk, I’ll always be sort of shocked at first, sort of startled, because I get so into it, I get into my own world. But it’s always a great experience when people stop and tell me they like what I’m playing.

What else are you involved with on campus?

I’m a religion major and I’m also considering pre-med. I’m a member of the cross country and track team, and that’s been a really cool opportunity. I’m also involved in a number of student ministries, like RUF, and I play piano also for a student ministry on Wednesday nights at 10:00 p.m. called Student To Student (STS).