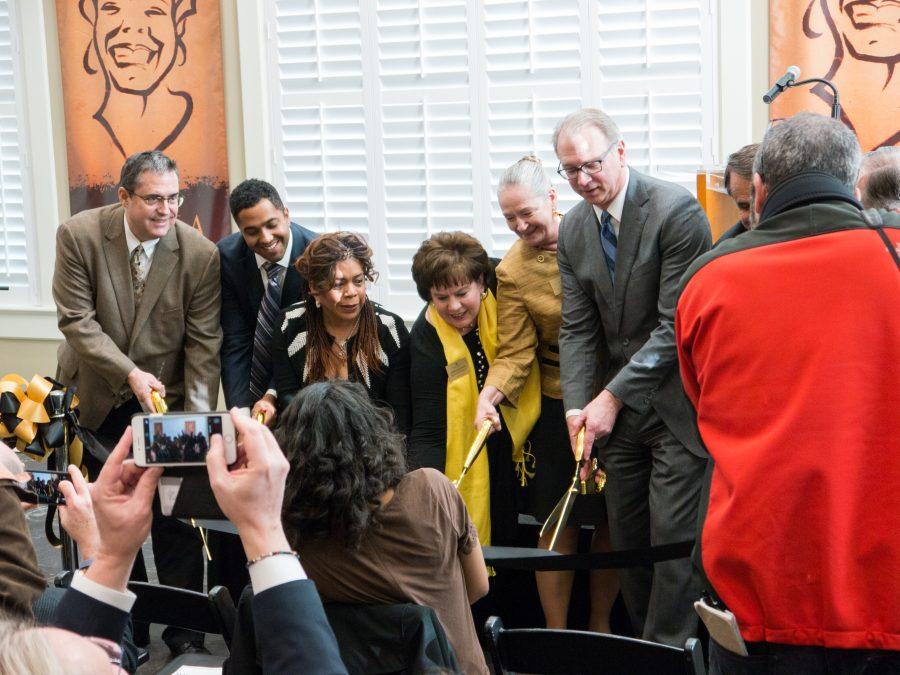 She was a part of the Wake Forest faculty for 32 years until she passed in May of 2014.

South campus buzzed as members of the Wake Forest community and guests gathered into Maya Angelou Residence Hall’s parlor at 3 p.m. Many of Angelou’s friends and family, including her grandson Elliot Jones, traveled from other places to be in attendance.

“This is like Thanksgiving in February,” Jones said. “All my aunties and uncles and family here in one place.”

The event held numerous styles of tributes that all commemorated the legacy of Angelou, including poetry recitation, a musical performance and speeches from numerous individuals both in the Wake Forest community and family of Angelou. The event started with junior Nia McIntosh expressively reading one of Angelou’s most well-known poems, “I will rise.”

Following McIntosh’s performance, President Nathan Hatch reflected on the wisdom and knowledge that Angelou graced upon the university.

“Today is not simply a day to open a building,” he said. “It’s also a moment to celebrate and remember the life and influence of a dear colleague, educator and friend…Here she engaged us with difficult questions, deep thoughts and meaningful exchanges. She reminded us that we are all human, that we have the power to love, to laugh, forgive and to rise.”

During the ceremony, singer and songwriter Valerie Simpson Ashford performed “Reach Out and Touch,” a song that she and Nickolas Ashford wrote together. It has been famously performed by artists such as Diana Ross and Aretha Franklin.

“I think it speaks to what she’s done for all of us and what she wants us to do: to continue to reach out and touch somebody’s hand, make this world a better place,” she said from behind the baby grand piano.

Angelou first came to Wake Forest in 1973 and was awarded an honorary degree from the university in 1977. She officially joined the faculty in 1982. Over the years, she taught a multitude of humanities courses.

“I am positive that she is looking down on us from her special heights and smiling upon us,” Jones read from the letter written by his father Guy Johnson during his speech. “Wake Forest university held an important position in my mother’s life because it gave her an opportunity to see that she was not simply a writer who teaches, but for most she was a teacher who writes.”

In an interview with the Old Gold & Black, Jones reflected on his relationship with his grandmother and said that it was during his time at college when he got time to really get to know her best. In three words, he described his grandmother as “courageous, phenomenal and a teacher.”

“My grandmother taught me all sorts of lessons and really pushed me to be all that I could be,” Jones said in the interview. “But we never talked about school and I never saw her as a professor. To me, she was just always grandma.”

“Angelou always made you feel at home,” Harris-Perry said. “Even when Wake Forest didn’t always feel like home.”

The brand new dorm that opened in January is a 76,110 square foot, five-story building designed to house 224 students. This semester it houses upperclassmen who returned from semesters abroad.

However, starting in Fall 2017, it will fulfill its original purpose by housing freshmen on South Campus.

The residence hall features many state-of-the-art amenities, including a classroom, study spaces, a media room with surround sound, game room, kitchens and a recreation lounge.