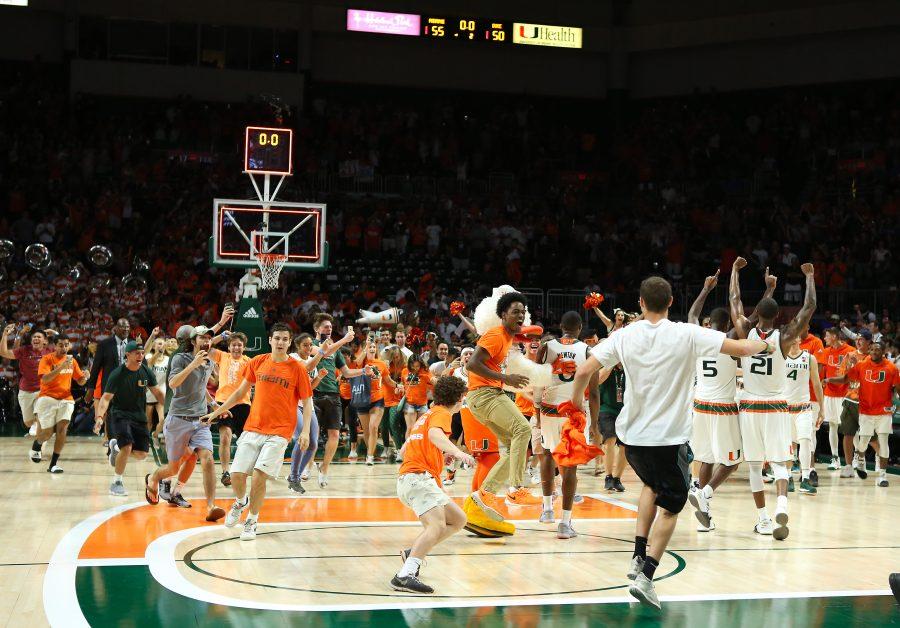 In a week full of buzzer beaters, momentum building wins and final opportunities to demonstrate conference supremacy, the ACC continues to be the most represented conference in the Associated Press (AP) Top 25 poll.

Holding seven of these 25 coveted spots, the ACC continues to be the most competitive conference in college basketball.

Heading into the final stretch of the regular season, North Carolina, Louisville, Duke and Notre Dame have emerged as the cream of the crop in the ACC. However, a few key upsets and victories this week will definitely play a role in NCAA  tournament seeding.

While North Carolina continues to hold the top spot in the ACC, their skills were put to the test against defensive powerhouse Louisville last Wednesday, Feb. 22 in a 74-63 victory.

With a two-game lead over the overall number two Cardinals this season, the Tar Heels had an impressive offensive performance yet again, moving them up to fifth place in the AP Top 25 this week.

Junior Justin Jackson’s notable 21-point performance continued to develop his respectability as an ACC Player of the Year candidate. Senior Kennedy Meeks also had solid offensive execution with 14 points and 10 rebounds for the Heels.

Per usual, Louisville showed strength on defense and gave North Carolina a run for their money throughout the first 20 minutes of play. Although only three points behind at the end of the first half, Louisville’s  frustrating 30.8 free throw percentage prevented them from closing the gap.

Both coming off steady wins earlier in the week, North Carolina choked against UVA last Sunday, Feb. 26. It was a big day for the Cavaliers who need a strong regular season finish to clinch an NCAA tournament spot. A clear underdog headed into this matchup, the Cavaliers successfully snapped Carolina’s four-game winning streak, defeating the Heels by a solid 10 points.

However, this was not the only feat they accomplished. This was the lowest scoring game for Roy Williams in his last 14 years as UNC head coach and to top it off, the Tar Heels only put up four points in the last nine minutes and 26 seconds.

Just as Virginia’s crucial win over North Carolina could serve as a turning point for the Cavaliers, John Gillon’s three-point game winning shot for Syracuse last Wednesday, Feb. 22 against Duke was a confidence booster for the Orange. Both Virginia and Syracuse remain on the bubble headed into the tournament as middle of the pack teams in the ACC.

Defeating the No. 10 ranked Blue Devils in a back-and-forth game and ending their seven game win streak, Syracuse’s ability to perform in high pressure situations will help their NCAA tournament chances. With Grayson Allen on the bench with ankle issues, Luke Kennard and Amile Jefferson continue to carry the Blue Devils in the final games of the season. Averaging 19.8 points per game, Kennard continues to emerge as a frontrunner for the ACC Player of the Year accolade.

Continuing their losing streak in Coral Gables, Duke was defeated yet again by Miami on Saturday, Feb. 25. A positive upswing in the Hurricanes’ end of season play, freshman Bruce Brown hit 11 out of 18 field goals and had 25 points overall.

In contrast, Kennard went six of 20 from the field and put up a relatively low 16 points for the Blue Devils. Although his three-point shot in the final minute of the game gave Duke the opportunity to tie, Miami came out on top.

With the motivation to bounce back from this two-game losing streak, Duke surpassed Florida State on Tuesday, Feb. 28 by five points as freshman Frank Jackson had a standout performance for the Blue Devils.

On Wednesday, March 1, Louisville faces Wake Forest at 9 p.m. in Winston-Salem while Notre Dame Takes on Boston College at home.

Not only does this Saturday mark the official end of the regular season, but one of the biggest rivalries in college basketball will take place between North Carolina and Duke at 8:15 p.m. in Tar Heel territory.