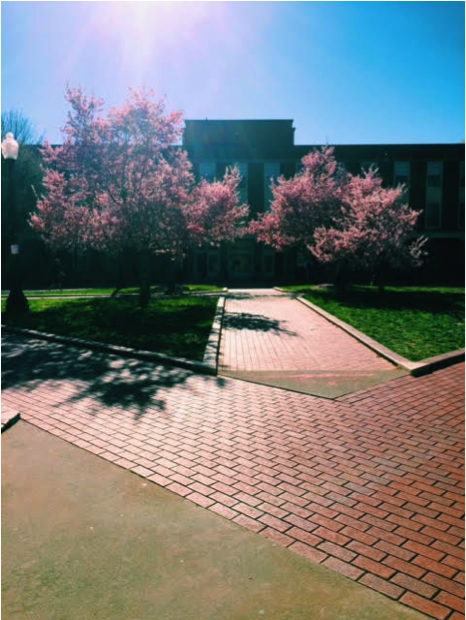 Throughout February, Winston-Salem has already experienced pockets of very warm weather, ultimately confusing mother nature. The emergence of the cherry blossom trees outside of the ZSR Library can attest to this complication.

Washington, D.C. hosts a large array of cherry blossom trees and they too have been noticing a slight change in the overall flowering of these trees. Although temperatures in Washington, D.C. vary from temperatures in Winston-Salem, research gathered over the past 96 years has proven that peak bloom dates have moved earlier by nearly five days. Washington’s cherry blossoms usually reach peak bloom in early April. Last year, however, the peak bloom date was March 25.

Global climate change has already begun to display apparent effects. Earth’s normal temperature has increased by 1.8°F over the past century, with the 16 warmest years on record for the earth coming since 2000. Glaciers have been shrinking, ice on rivers and lakes has been melting sooner, plant and animal ranges have moved and flowers are blossoming earlier. These significant warming trends are mostly influenced by human activity.

Our own campus appears to have seen the effects of climate change as well.

“In the last 10 years, we have removed several mature sugar maples that were in severe decline,” said Jim Mussetter, the university arborist. “On the remaining campus sugar maples, I’ve noticed fall color is not as vivid and they are defoliating earlier. Both of these are signs that trees are stressed or in decline.”

Mussetter noted that the existing sugar maples are younger and obtain a good deal of growing area providing them with more access to nutrients and water. Therefore, under ordinary weather conditions these trees “should have good vigor.”

Preston Stockton, manager of Reynolda Gardens, has worked as a horticulturalist in Winston-Salem for 35 years and has also noticed the effect that climate change has had on our environment.

“We are now able to grow plants that 30 years ago would have never survived the winter here,” Stockton said. “Figs used to often die back to the ground after many winters and now that just doesn’t happen.”

Stockton added that it is now hard to get certain plants to survive through the summer. The Reynolds family used to grow lupines, monkshood, delphinium and heliotropes and she explained that they can no longer grow them because they would die as a result of the heat in the summer.

The Hardiness Zone Map is used by gardeners and growers to determine which plants are expected to flourish. The more extreme the temperature is, the higher the zone level is.

“When I first started at Reynolda we were a zone 7,” Stockton said. “Now we are classified as zone 7a and many people say we will soon be an 8.”