Can bioethics contribute to addressing racism? 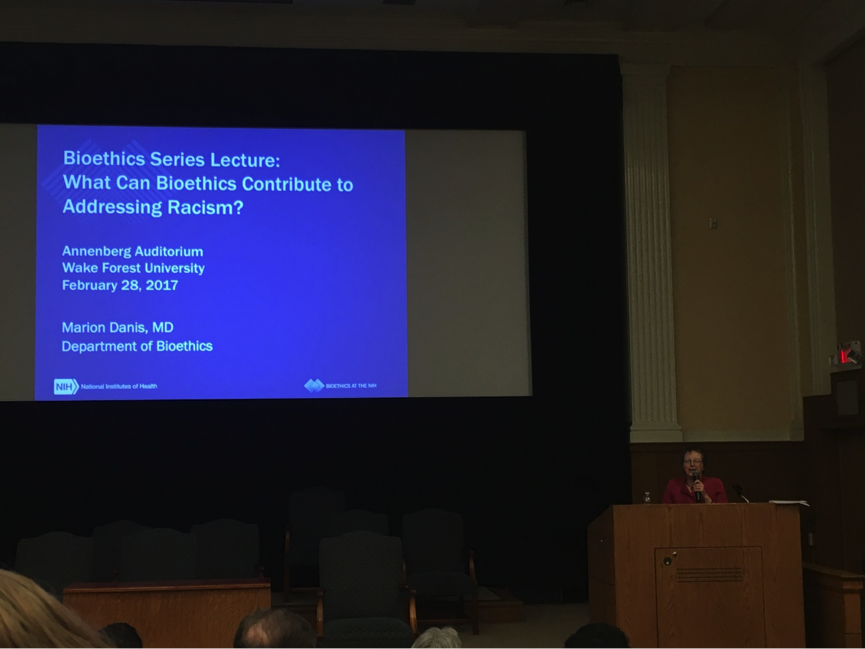 On Tuesday, Feb. 28, Marion Danis  gave a lecture entitled “What Can Bioethics Contribute to Addressing Racism?” in Annenberg Auditorium.

Sponsored by the Center for Bioethics, Health and Society, the lecture consisted of a presentation by Danis followed by a Q&A discussion.

Danis, the Head of the Section on Ethics and Health Policy in the Department of Bioethics at the National Institute of Health (NIH) Clinical Center, began by creating an overview of what bioethics is by presenting several definitions of bioethics as given by other health institutes and organizations. The Public Health Institute had the most comprehensive definition, as it encompassed health in all policies.

She moved on to the issue of racism, emphasizing that while the U.S. has made progress in the treatment of African Americans, racism in healthy policy and healthcare is still a persistent problem. Danis expanded this to include more than racially motivated violence and incarceration.

“Even if we go past the justice system, we can see underlying injustice for African Americans,” Danis said, citing statistics on poverty rates, high school graduation rates and housing segregation.

Danis pointed out that this racism and injustice affects a person’s physiological and psychological health.

“Racism has an impact on the health and well-being of people,” Danis said.

Those who experience racism are more likely to have anxiety and depression, chronic health issues that are produced by stress and a shorter life expectancy.

She then went on to to further connect bioethics and racism. Danis believes that a core concern of bioethics is to care about social justice, especially since racism is so prevalent in the healthcare industry.

Danis shared an example of this belief with the personal story of a colleague at Washington University in St. Louis. In response to the Ferguson riots, the healthcare staff at Washington University held conversations and meetings, but excluded from these discussions were the security staff — the only African American healthcare employees. In addition, Danis gave the more general example of a hospital that separates its floors by payer status. As African Americans are often Medicaid patients, they get segregated by their economic status as well.

Breaking down this racism is not going to happen overnight, which Danis recognized.

“We need to become conversant about race as a concept, and what the implications are for addressing racism are,” Danis said.

Danis continued her lecture by presenting solutions that can aid in addressing these issues. She listed the ways in which bioethics can contribute, which included: bioethics scholarship, ethics consultation, teaching, policy, training and outreach. A majority of this part of the lecture was spent discussing bioethics scholarship and empirical research into policy and implicit bias, as it was the most relevant solution to the bioethics and healthcare students in attendance.

“Previously, I didn’t understand all the implications and complications of this moral problem. I thought it was useful to present all these different solutions that can apply to any person in any field,” Zide said.

Danis concluded her lecture by looking forward to how racism overall can be overcome.

Although she found the lecture very insightful, freshman Lauren Goff believes that discrimination in any form should be tackled.

“[Danis] didn’t cover discrimination in general, just race,” Goff said. “There are other types of discrimination that should also be addressed in healthcare.”