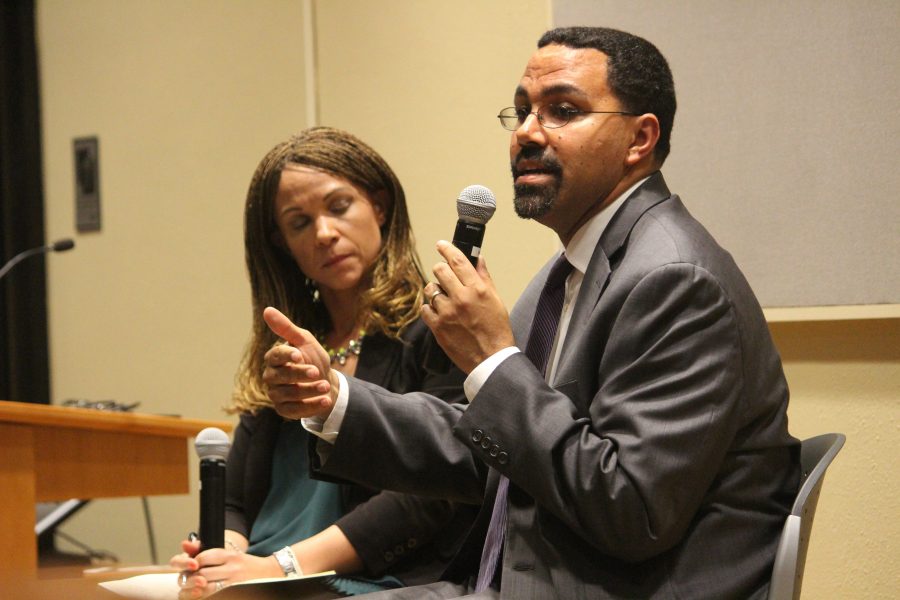 Former Secretary of Education John King, Jr., a career educator who served during the final year of the Obama Administration, spoke about the future of public education on Feb. 24 at Wake Forest.

The open discussion was moderated by Melissa Harris-Perry and hosted by the Anna Julia Cooper Center. King spent his career advocating for educational equity by concentrating on the achievement gap and opportunities for low-income students, students of color and English language learners.

“John King is a genuine educator; enthusiastic about how teachers and students are changed when they encounter one another with openness to new ideas and experiences,” Harris-Perry said in a Wake Forest press release. “Although he is no longer leading the Department of Education, he remains a leading voice in American education at a time when the future of public schools is in deep turmoil.”

Throughout his career, King has frequently remarked that his New York City teachers “saved his life” by turning his school into a refuge after his parents died when he was a child.

“Whatever was going on at home, at school I was able to be a kid,” he said. “If you don’t have those supports, your life can go in a different direction. I could be dead, I could be in jail, but I’m not.”

The prominence of his public school education throughout his formative years inspired King to found and lead charter schools in Boston, serve as the New York City commissioner of education and eventually join the federal Department of Education in 2014.

“Schools can be a powerful force in young people’s lives and can help them get on the right path or the wrong path,” King said. “As educators we need to treat this with tremendous urgency.”

King emphasized the “daily renewal of faith” inherent in the teaching profession that inspired him to become a lifelong educator. For example, he recounted the story of one of his former students, named Ricardo, who rarely participated and scarcely passed with a 59 percent grade average, which rounded up to a 60 percent. However, Ricardo was “on fire” about a project on political leader and proponent of the Pan-African movement Marcus Garvey.

King said he supported Ricardo as he created “seven or eight drafts” and discovered the inspiration to work to ameliorate his academic situation.

“The student said to me, ‘One of the things I wished I’d known as a ninth grader that I know now is how to do school,’” King said.

This experience inspired him to become a middle-school principal so that he could have impactful interactions with students at an earlier age.

Furthermore, King commented on recent education-related policy changes within the Trump Administration, including a reversal of an Obama-era guideline that states that denying transgender students the right to use the bathroom corresponding with their gender identity violates federal prohibitions against sex discrimination. He expressed concern that if the White House does not know and communicate with transgender students, they will be increasingly likely to reach the wrong conclusions.

“I went down to Orange County, Orlando [after the Pulse nightclub shooting] and spent time with LGBT young people to mourn with them and I spent a long time talking to transgender young people about their experience,” King said. “I hope that as policy makers make these decisions, they will talk to students and come to the conclusion that no student should feel uncomfortable at school. What will move the culture will be people attending to the humanity of their students.”

In addition, Harris-Perry observed that the recently confirmed secretary of education, Betsy DeVos, has not been a teacher and “might be missing” an understanding of what happens in public schools and what they mean in American society due to her lack of experience with education.

“I hope she spends time in public schools and with teachers and parents, and sees the tremendous impact public schools can have in students’ lives, and changes some of her views,” King said.

Before DeVos’ confirmation, King told the Washington Post that he spoke with her about the role of the Department of Education in protecting civil rights and promoting equity. “Certainly that’s not partisan,” he said.

The discussion also explored the challenge of continued racial and socioeconomic segregation in American public schools, which can cause significant variations in educational quality from neighborhood to neighborhood. King called for emphasis on educational equity in the Obama Administration’s answer to No Child Left Behind, the Every Student Succeeds Act, and has firmly stated that a child’s education should not be determined by his or her ZIP code.

“The thing that stuck with me the most from his conversation with Harris-Perry was his comment that integration to public schools is a choice that we as a society make,” said sophomore Drew Finley. “The segregation of public schools is not something that just happens. In my own research, I have looked at residential segregation and its effects on public schools. His insight was invaluable for me in moving forward with my own work.”

King has been named chief executive of The Education Trust, which is an advocacy group among those concerned that the Trump Administration’s states’-rights approach will lead to a weakened enforcement of civil rights in public schools. In effect, King will work as a watchdog for the agency he used to lead.

The former secretary expressed concern yet resolve regarding the future: “What we have seen within the last four weeks is not normal. I am deeply, deeply, deeply concerned every day. But if you look at American history, it is a story of progress. Progress in fits and starts, but progress. I believe that view of American history to be true.”