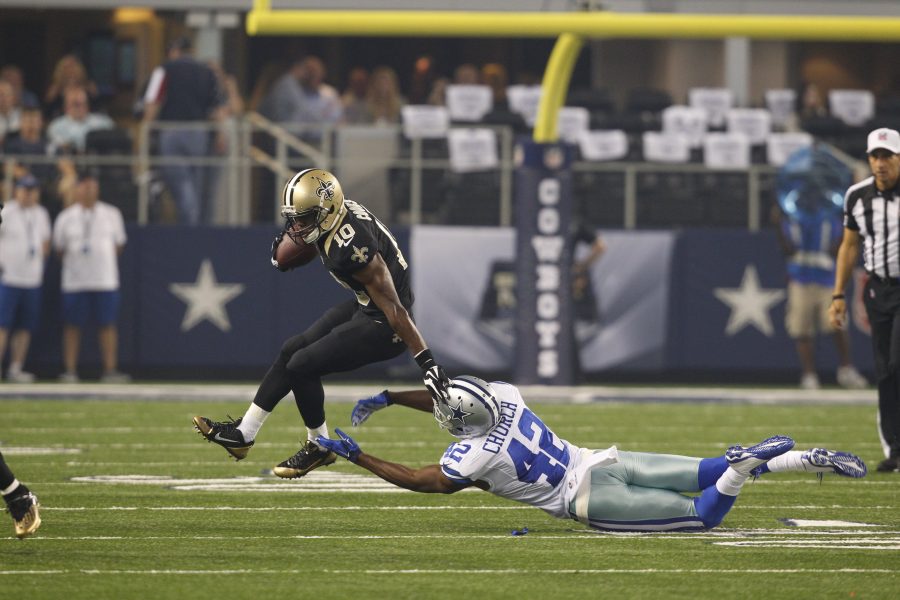 While many Wake Forest students wait all year for the December holiday’s to provide them with new gifts and toys, NFL coaches and fans alike look forward to March.

With most of the larger contracts recently signed, here is a look at some of the winners and losers of free agency.

As if this team needed to improve, the Pats just had an unreal influx of talent following their Super Bowl victory. Most notably, trading the 30th pick overall in the 2017 draft for former Saint’s wide receiver Brandin Cooks. Cooks is the latest in the long line of “burners” at the wide out position that can stretch a defense and open up the middle of the field for the Pat’s plethora of slot receivers. The Patriots also signed cornerback Stephon Gilmore, who is a large improvement over former corner Logan Ryan who is now being overpaid by the Titans. More trades included one with the Panthers to acquire defensive end Kony Ealy, who will step in for the departed Jabaal Sheard (Colts), and another with the Colts to bring in Dwayne Allen to replace Martellus Bennett (Packers). Perhaps the best move the Pats made in free agency is re-signing the leader of their defense, Dont’a Hightower, to a four-year, $43 million contract, of which he is worth every penny.

Significant losses include Pro Bowl guard TJ Lang (Lions), starting center JC Tretter (Browns), starting running back Eddie Lacy (Seahawks), edge rusher Julius Peppers (Panthers), edge rusher Datone Jones (Vikings) and safety Micah Hyde (Bills). They did resign edge rusher Nick Perry which was much needed and brought corner Davon House to bolster their defensive back depth. The only other addition of notes is former Super Bowl champion Martellus Bennett to a three-year $21 million contract, which looks to be an overpay for the 30 year old with a history of erratic behavior.

Wins certainly do not come cheap in Jacksonville, and this free agency period proves it. The Jags signed the top cornerback on the market, AJ Bouye, to a five-year $67 million contract in hopes that his success in Houston will follow him to Florida. Pairing the talented corner with rising star Jalen Ramsey may finally make Jacksonville’s defense one to fear. The Jags also signed Pro Bowl defensive tackle Calais Campbell from Cardinals and brought in safety Barry Church to fill in for the loss of Johnathan Cyprien to the Titans. One of the most cost effective moves of free agency was their swapping of tight end Julius Thomas with the Dolphins for former Pro Bowl left tackle Branden Albert. It seems like it is said every year, but maybe 2017 is when the Jaguars finally turn it all around.

The Cardinals signed a premier pass rusher, Chandler Jones, to a five-year $82 million contract. This may seem like a lot, but over the past three years only Von Miller and Khalil Mack have more sacks than Jones, so he may very well be worth the money. Unfortunately for Arizona, this is where the good news ends. Key losses include the before mentioned Calais Campbell (Jaguars) who was as the core of their defensive success and rising star at strong safety, Tony Jefferson (Ravens) who, while over-shadowed at times by Patrick Peterson and Tyrann Mathieu, played a large role in their coverage schemes. The Cards also lost safety DJ Swearinger (Redskins), and are unlike to resign starting linebacker Kevin Minter or edge rusher depth Alex Okafor. With Carson Palmer seemingly a year away from an AARP card and the mess they will have at wide receiver once Larry Fitzgerald retires, the rapid decline of this defense is the last thing Cardinals fan’s need.

Best of the rest

Still holding out hope your team will sign a new talent? Here are some of the best remaining free agents:

Dontari Poe: Super athletic nose tackle that at 346 pounds can probably out sprint anyone reading this article.

Adrian Peterson: The greatest running back of his generation is still only 31 and should be in the hunt for a ring. Looking at you Oakland (or… Las Vegas).

Johnathan Hankins: A solid defensive tackle the Giants would be wise to re-sign if they want to stay on par with their quickly improving division.

Morris Claiborne: Formerly labeled a huge draft bust, the natural talent at corner finally put it all together for the Cowboys last year before getting injured.

Jamaal Charles: Feel like gambling on a former star at running back who’s knees are more shredded than Enron’s financial statements, this could be your guy.