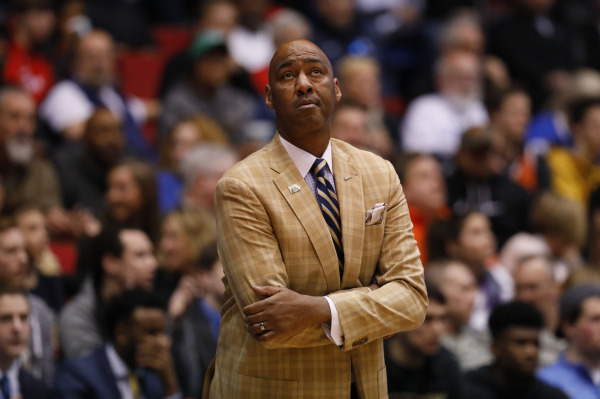 On a frigid Tuesday night, the Wake Forest men’s basketball team season ended in a tough battle to the Kansas State Wildcats.

The game was part of the First Four, the traditional first games of the NCAA Tournament. It was the Deacs’ first March Madness appearance since 2010 and 23rd appearance all-time.

The game began with Kansas State aggressively attacking the paint, which allowed them to slow down the game to their preferred pace.

Throughout the first half, the Wildcats played an active 2-3 zone defense that extended into a full court press, causing uncharacteristic turnovers from the Wake Forest guards. Mitchell Wilbekin hit a three-pointer to spark a mini-run and tie the game at 13 with 11:50 left in the half.

The game continued at an uncomfortably slow tempo for the Deacs as both teams entered the bonus at the 9:28 mark. D.J. Johnson and Wesley Iwundu of Kansas State dominated the interior and drew constant fouls. Kansas State was able to score on 62.5 percent of their field goals and outscored the Deacs 24-6 in the paint at the end of the first half.

Even with Wake Forest’s turnover problem and Kansas State’s high field goal percentage, the Demon Deacons were able to keep the game close by hitting free throws. The team as a whole shot a fantastic 17-18 (94.4 percent) from the line in the first period. Wake Forest was lucky to only be down 40-36 going into halftime.

The second half started with a wild sequence and an increased pace. Kansas State made baskets on seven of the first eight possessions. Wake Forest countered by emphasizing on getting the ball to star forward John Collins, who had 18 of his 26 points in the last 20 minutes. Austin Arians and Brandon Childress hit a pair of three-pointers to keep the Deacs within three points at the 13:13 mark. After Arians made another three-pointer and a pair of free throws from Childress, Wake Forest was down 67-66 with 8:08 left.

Over the next few plays, Collins would have a pair of great finishes from Crawford lob passes. However, the Deacs continued having trouble stopping the Wildcats from scoring. Iwundu, who finished with team-high 24, hit a pair of shots, while sophomore guard Kamau Stokes hit a three-pointer. Stokes in particular would halt the Deacs momentum throughout the contest with big baskets. The Wildcats extended their lead to 79-70 with just four minutes in the game.

After a timeout, the Deacs were determined to make one final push. Arians hit another three-pointer and Crawford drove through the lane to make a tough layup. The Deacs were only down five, but Stokes hit another contested three-pointer. Crawford answered back with four consecutive points, including a fast break layup to keep the game within reach.

The game then swung back in favor of the Wildcats. After Wilbekin missed a long three-point attempt, Crawford was called for a questionable flagrant foul for tripping Stokes. The referees checked the monitor and concluded that the trip was intentional, but Crawford after the game said that he was only going for the ball. Stokes hit two free throws and Kansas State got the ball back as a result of the flagrant foul. Johnson would score in the paint and Wildcats were up 88-79 with 1:20 left. The lead was insurmountable and the Deacs would fall 95-88 to Kansas State.

Crawford finished with 20 points and 10 assists, a program record for assists in the NCAA Tournament. Arians matched his career high of 17 points with a 4-5 effort from three-point land.

Stokes had 22 points, 19 of which game in the second half. Johnson had 18 points and six rebounds.

The Deacs ended the year 19-14, their best record since the 2009-2010 season. Clearly disappointed, heas coach Danny Manning said after the game his team needs to get better at staying in front of the ball on defense. The Wildcats averaged just under 72 points per game going into Tuesday and were able to score 95 points on 66 percent shooting.

The next few weeks will focus on the NBA decisions of Crawford and Collins. Crawford had an underrated season but has the size for an NBA point guard. Collins is likely to turn pro as he is a projected lottery pick, but told the Old Gold & Black’s Ethan Bahar in a post-game press conference “that is not something I’d like to comment on right now.”

Overall, the best season in seven years ends on a disappointing note. The experience should help the returning players be prepared for the future as the Deacs will look to factor into the March conversation for years to come.