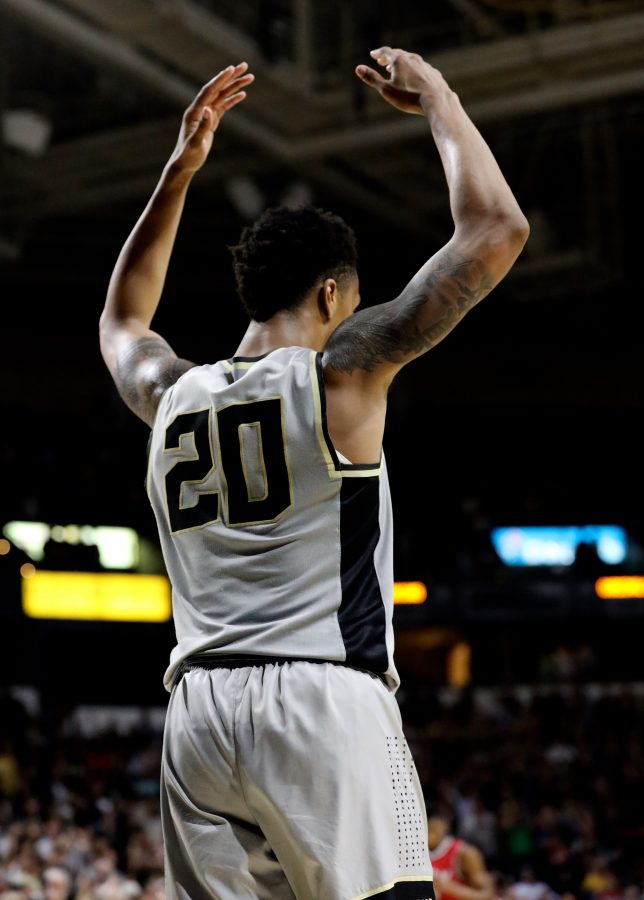 “We have aspirations of being a championship team.”

These were the words of coach Danny Manning on April 8, 2014 when the Demon Deacon community came together on Hearn Plaza to welcome the man they believed would lead them back to competitive play in the ACC once again. Nearly three years later, the Demon Deacons accomplished something they hadn’t achieved since 2010 — receive an invitation to go dancing in the month of March.

Supplementing the celebration that came with the announcement of an NCAA Tournament bid on Sunday, March 12, were sentiments of relief felt by the Demon Deacon faithful that suffered through the post-season drought that was the Jeff Bzdelik era.

The Demon Deacons saw hope in Manning from the day he was hired, given his success as a player at both the collegiate and professional levels. Arguably one of the best college basketball players of all time, Manning led the University of Kansas to the 1988 National Championship and was a No. 1 NBA draft pick later that year.

There was no doubt that Manning had been a successful player, but many analysts considered his hiring in 2014 as an “unconventional move” largely because of his lack of head coaching experience, having only two years under his belt at the University of Tulsa.

But his promise of being able to recruit and develop players, combined with his proven ability to improve Tulsa’s program in just two seasons, indicated that Manning was the man for the job when it came to revamping the university’s basketball program that boasts the success of historically great teams and players such as Tim Duncan and Chris Paul.

From the notorious moment students rolled the quad in response to Bzdelik’s firing to the moment on Tuesday night, when the Demon Deacon faithful watched Wake Forest play with the iconic NCAA patch on its jerseys, the journey to national relevance had finally reached its destination.

Despite winning just five games in conference play, Wake Forest proved it was moving in a positive direction, losing to the No. 2 Virginia Cavaliers by just one point on the road in Charlottesville. A loss of such a small margin to one the nation’s best teams was certainly celebrated as a step in the right direction for the program — considered a moral victory to seemingly all that follow Wake Forest basketball.

Manning wouldn’t have it in Charlottesville after nearly knocking off the second best team in the country, and on future occasions, similar moral victories were never celebrated.

To reestablish a winning culture at Wake Forest, Manning’s Demon Deacons needed to learn what it meant to win big games.

Over the past three seasons Wake Forest competed with some of the best teams in the country, taking many of them down to the last possession of the game.

In the 2015 Maui Invitational, Manning earned his first victory over a ranked opponent as then-freshman Bryant Crawford drove to the basket in the game’s final seconds to defeat No. 13 Indiana.

The upset victory over the Hoosiers in Maui gave hope that the Deacs had rediscovered its winning ways, but a disappointing record of just two conference victories in 2015-2016 put these hopes to the side once again.

The 2016-2017 season was highly anticipated, despite it having many question marks after losing two leaders in Devin Thomas and Codi Miller-McIntyre.

How would Crawford build off his impressive freshman season?

Would John Collins develop into the offensive threat that many considered Thomas to be in previous seasons?

How would Austin Arians, a graduate transfer from Milwaukee, fit in with the program?

Would Keyshawn Woods be as good as advertised from beyond the arc?

Could Wake Forest expect Dinos Mitoglou to recover from what many considered to be a sophomore slump?

And finally, how would incoming freshman Brandon Childress handle the pressures of playing on the same court as his father, the great Randolph Childress, once did?

These were just a few of the many questions that Wake Forest faced when the season began in November and seemingly all of them were answered as the season progressed.

Crawford was the team’s second leading scorer and the league’s second highest assist leader that made plays to help the Deacs win nine games in ACC play, especially in the regular season finale at Virginia Tech when the sophomore scored 26 points and dished out five assists.

Collins became dominant in the ACC this season, receiving first team accolades, in addition to the recognition as the league’s Most Improved Player.

Collins led the team with 19.2 points and 9.8 rebounds per game and is now considered by many to have a chance to be a first round draft pick in this year’s NBA Draft.

Arians proved to be an excellent shooter, knocking down a combined seven three-pointers in the ACC Tournament over two games.

And Mitoglou seemingly bounced back from a disappointing sophomore season, showing tremendous growth in the paint and on the defensive side of the ball.

Brandon Childress proved to be an excellent addition to the Wake Forest rotation, bringing a fearless presence to the lineup every time he stepped onto the court. With his freshman season behind him, it should be exciting to see how Childress progresses and develops in preparation for his sophomore year.

Among the most impressive feats for this season include the team’s consistency in defeating most every inferior opponent it faced and fighting to win four of its final five games to earn an invitation to the NCAA Tournament.

Two of those final games featured the marquee victory over No. 8 Louisville at the Joel and the road defeat of Virginia Tech in Blacksburg to cap the end of the regular season and seemingly assure Wake Forest of its Tournament chances.

Wake Forest made giant steps forward in 2016-2017 as it seemingly established a winning culture under Coach Manning.

From this point forward the Wake Forest faithful should join Manning in refusing to acknowledge moral victories, expecting the Deacs to have a chance to come out victorious each time they step out on the court, no matter the competition.

One day before he died, the great Skip Prosser said, “We are going to be good again.” The Deacs returned to the Big Dance in 2017. Coach Prosser was right. And yes, we are good again.