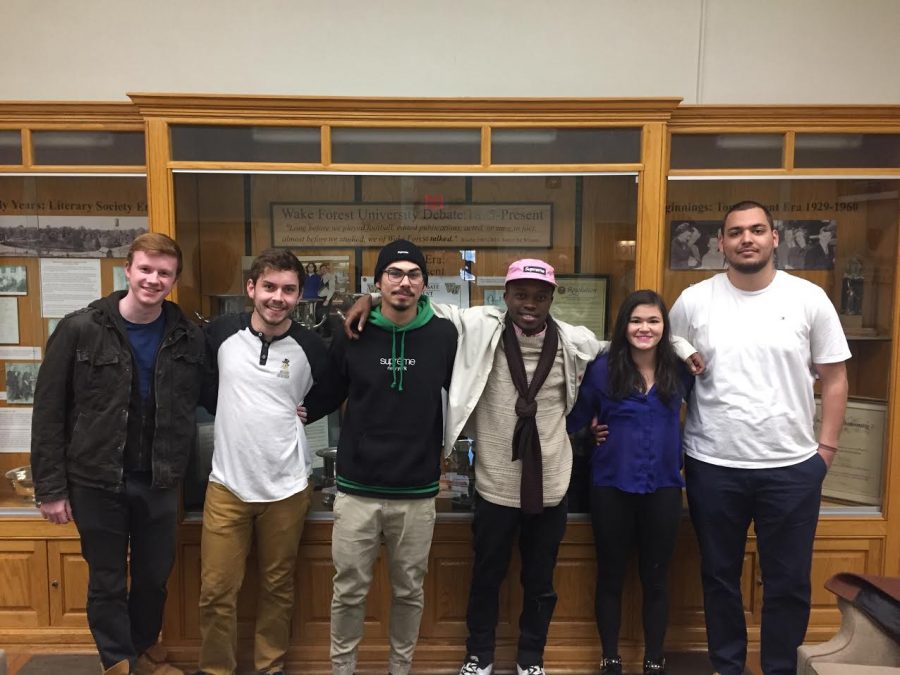 Three teams will represent Wake Forest at the National Debate Tournament championship, hosted by the University of Kansas, from March 22-28.

The 71-year-old tournament is limited to the top 78 teams in the nation.

“Only six schools are allowed to qualify a third team, so this was very special for us,” said Jarrod Atchison, the director of debate.

Wake Forest Debate’s top team of junior Charles Athanasopoulos and senior Corinne Sugino are currently ranked fourth in the nation behind only Harvard, Berkeley and Georgetown. After placing as as the first and second place speakers overall out of over 300 individual competitors at the 2017 Northwestern Debate Tournament and almost winning against Harvard in a close final round, the debaters received an automatic bid to advance to the National Debate Tournament. This type of “first round at-large bid” is only awarded to the top 16 teams in the country for that season.

Senior Jack Manchester and junior Brent Mitchell also qualified for the National Debate Tournament as the top overall seed for the district.

“My partner and I qualified out of the District tournament, which is a tournament where schools in our region all compete to be one of the six teams from our district who can earn a spot to the National Debate Tournament,” Manchester said. “It means quite a lot to me as this is my first National Debate Tournament (and my last), so I’m beyond excited to have a chance to bring home a national championship for Wake Forest.”

“We have three teams that have a really good chance to make a run deep into the tournament, so it should be a really fun and exciting few days for Wake Debate,” Manchester said.

“The team played a big role in our qualifying because they helped us out when we were in elimination rounds, and I’m very grateful for that” Sugino said.

Wake Forest Debate currently has 28 debaters on the team. Atchison, a team alumnus who earned both his undergraduate and graduate degrees from Wake Forest and who also met his wife on the team, is the director of the program. Justin Green, who is also a Wake Forest Debate alumnus and was Atchison’s debate partner, is the head coach and Ken Strange is the assistant head coach. All three are faculty members in the communication department.

The team members are a close knit group. Sugino’s main goal outside of winning the tournament is to contribute to this team culture.

“Many people in Wake Debate have been a family to me when I needed one, and I hope to make other people feel the same way,” Sugino said.

In addition to academic standing, Wake Forest Debate’s prestigious and competitive policy debate program is the primary reason that Sugino, a double major in Politics and International Affairs and Religious Studies from Salt Lake City, Utah, chose to attend Wake Forest. The team, which has a history dating back to 1835, the year after the university was founded, holds two previous National Debate Tournament titles from 1997 and 2008.

The program has also had final four finishes at the tournament in 1955, 1993, 1994 and 1995 and two finals appearances in 2006 and 2009. Wake Forest Debate also holds the record for most consecutive top ten rankings in the National Debate Tournament results of any team in the nation, a streak which lasted from 1988-2002.

Sugino plans to attend graduate school to study communication in order to achieve her long term goal of becoming a debate coach and a university professor. During that time, she plans to continue to be involved in debate by judging and coaching at tournaments.

Manchester will be returning to Wake Forest for two years to serve as an assistant coach while working towards a Master’s degree in communication.

“I hope debate will always be a part of my life,” Sugino said.