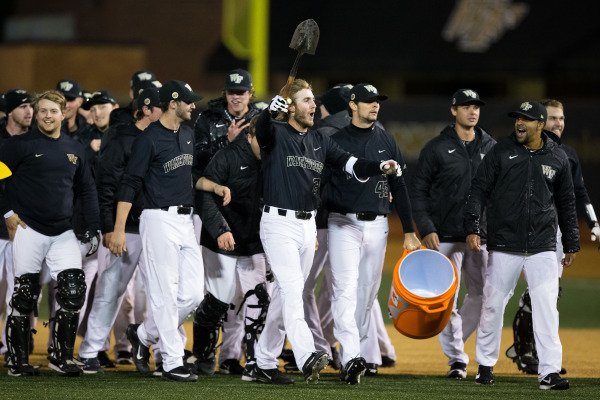 The Deacs brought home yet another series win this past weekend, this time against North Carolina rival, Duke.

Wake Forest secured the final series win with 11 runs to 2. The Deacs have already won past series against Southern Cal, Kent State and NC State (a true nail biter that pushed over into extra innings) this season.

It’s safe to say this season is off with to an incredible start. For the first time in the program history, the team has had two three-homer games in the same season — junior, Gavin Sheets, vs. USC and senior, Ben Breazeale, at High Point. Pitching records are also projected to be broken with senior and captain John McCarren hoping to claim second place for all-time most-game appearances.

The Deacs were projected to win against the Charlotte 49ers this past Tuesday, but unfortunately the game was postponed until Wednesday due to weather. However, this didn’t upset the Deacs at all as they fought their way to another win over Charlotte. Special appreciation to Logan Harvey who hit Wake Forest’s fifth grand slam of the season and his first of the year.

This weekend, the Deacs will face off against Georgia Tech, for another ACC series. If they can pull through with a series win, the Deacs will be well on their way to comfortably securing a spot in this year’s ACC Tournament. Each of this series’games will be live streamed on ESPN’s website and broadcasted on TV channel ACCN Extra.

This coming Sunday the Wake Forest Baseball team will be hosting Bark in the Park. Fans are encouraged to bring their pooch’s to the game for an afternoon of baseball and fun. There is also a puppy parade 15 minutes before first pitch that all dogs can participate in. Tweet in a picture of your furry friend to @WakeBaseball for a chance to throw out the first pitch.