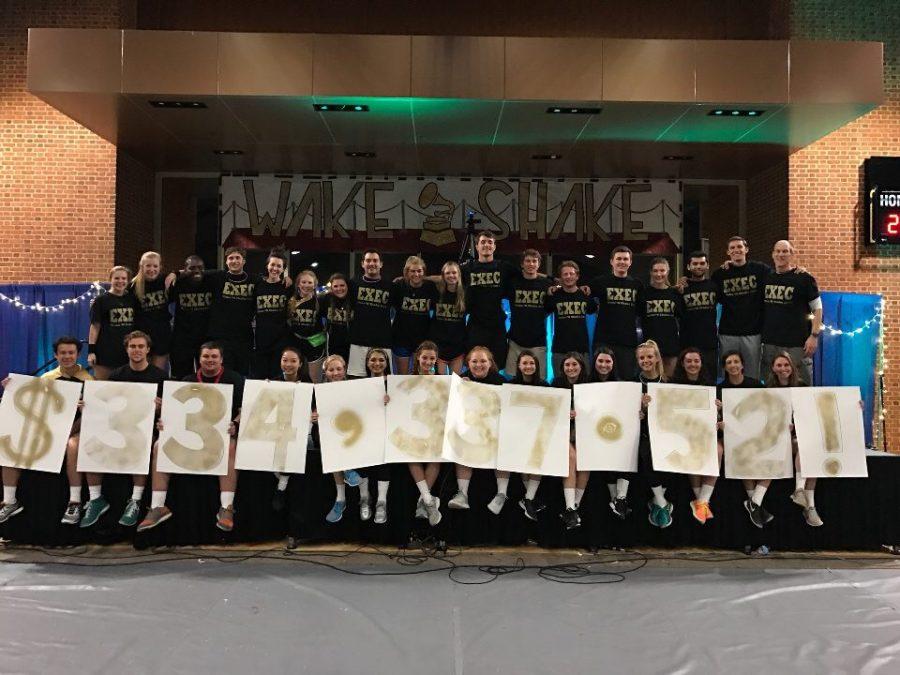 One thousand four hundred and thirty  participants, 31 executive staff members, 11 committees and $334,337.52 raised for one cause, fighting cancer.

The 12th annual Wake N Shake, a 12-hour dance marathon held every spring to raise money for the Brian Piccolo Cancer Research Fund, occurred Saturday, March 18 in the Sutton Center.  Past donations from this event have funded experimental research, specifically in pancreatic cancer using the drug cpi 613, that would never have occurred otherwise. This year the dance marathon broke previous records for number of participants and amount of money raised.

“Raising over $300,000 for cancer research is remarkable and unprecedented for a school our size,” said Mike Ford  director of philanthropy and legacy programs with the Pro Humanitate Institute.

Boris Pasche, director of the Comprehensive Cancer Center at Baptist Health, kicked off the event by telling participants about successful research that been funded directly by Wake ‘N Shake.

Treatments using the drug cpi 613, a mitochondrial metabolism inhibitor, are currently being tested to combat a deadly form of pancreatic cancer.  Use of this treatment is leading to an increased number of pancreatic cancer patients entering remission.

Every year Wake ‘N Shake executive members tour the Cancer Center at Baptist Health to learn more about the work they support.

This was an important experience and co-chair of local community outreach, Ben Weekley said that “[Baptist Health’s] message aligns with our message: it’s all about making people’s lives better, whether that’s curing them or making them comfortable.”

At the event, participants are randomly divided into eight teams with different color shirts, encouraging students to meet people from different groups and organizations around campus.

“There’s a sense in which everybody is kind of on equal footing here.  We all want to find a cure for this disease.  The ownership of the event is widespread” Ford said.

Each team also has a “Team Champion.” This is an individual who has fought or is currently fighting cancer and received their treatment from Wake Forest Baptist Health. Throughout the 12 hours, eight different Champions told their stories of bravery, perseverance and struggle with cancer.

Champions were introduced for the first time in 2011, and for many students listening to their stories is the most impactful part of the Wake ‘N Shake.

“It connects the dots [to show] why we’re up here on our feet for 12 hours raising money,” Ford said, “[when]seeing actual lives changed.”

Aside from the incredible number of donations raised, Wake ‘N Shake also strives to bring the Wake Forest community together and include diverse groups of participants from all over campus.

This year the dance marathon had a record number of participants, in part due to an incentive system created to encourage these non-Greek organizations. Additionally, a prize was given to the group that raised the most in each division: fraternity, sorority and non-Greek.

Having more participants not only helps increase donations to the Brian Piccolo Cancer Research Fund, but creates an important awareness within the community.

“Wake N Shake is not for any one group or club or organization, it’s for all the students,” Ford said. “It’s the whole community’s dance marathon”