Five players to watch from the 2017 NFL Combine 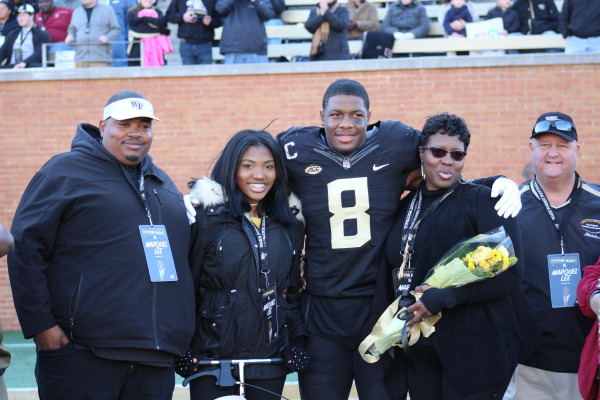 These five players outperformed expectations and moved up draft boards.

Why is he just No. 5 after breaking the 40 yard dash all-time record with a 4.22? One reason is that the 40 yard dash is the most overrated aspect of the NFL Draft. The Combine is important, but it will never trump a player’s game tape. Having a great 40-yard-dash time for a wide receiver is helpful because it means the prospect can separate from coverage, but wide-outs can get separation in other ways too, such as running polished routes. The reason Ross made some money, but not the most, is because he was already projected as a first round draft pick and the third best wide receiver in his class. None of that has changed, but a blazing 40 time does confirm that Ross’s claim to fame, his speed, is beyond reproach.

Weighing in at 240 pounds and only jumping 28.5 inches in the vertical surprised a lot of people. Many started to question if Fournette was really the second coming of Adrian Peterson we’ve been led to believe. But a 40-yard-dash time of 5.51 seconds confirmed our hopes. Fournette’s combination of size and speed is off the charts with the highest speed score of any running back in this year’s draft by a large margin. For comparison, Fournette ran only 0.02 seconds slower than Dalvin Cook, the next highest rated running back, and did so 30 pounds heavier. After a stellar Combine, do not be surprised to see Fournette’s picked by the Jaguars. And if this draft prediction were to come true, Jacksonville would make Fournette the eighth highest paid running back in the NFL in his first season.

Every year at the Combine, there are lesser-known prospects that display extraordinary athleticism and literally leap their way into the first round. Obi Melinfanwu ran a 4.40 40-yard-dash — eighth fastest in the draft — jumped an astronomical 44 inches in the vertical — highest in the draft — and leaped 11’9” in the broad jump — furthest in the draft. Melinfanwu also measured in at a towering 6’4” and 224 pounds. If Superman went to the Combine, he would look sluggish compared to this guy. Two years ago, former UConn safety Byron Jones jumped into the first round after shattering Combine records. Melinfanwu will most likely follow suit.

The predicted No. 1 prospect in the draft, Garrett earns the coveted prize of playing for the Browns. So his rookie contract did not grow after his insane Combine performance. What did grow is the second contract he will sign after he becomes a perennial pro-bowler and the next great edge rusher in the NFL. Garrett’s Combine numbers confirm he belongs right up there with Von Miller, Khalil Mack, Vic Beasley and soon-to-be Jadeveon Clowney, as the most likely players to give quarterbacks night terrors. Imagine a man who is 6’4”, 272 pounds, and runs 40 yards as fast as a Miami wide receiver Jarvis Landry at 4.6 seconds. Also, he jumped 41 inches in the vertical, which is 3rd in the class. That is third of every player — cornerbacks, safeties and wide-outs. He jumps higher than almost everyone on the field. He finished the Combine with a 10’8” broad jump (second in his class) and 33 reps in the bench press with 35 inch arms.

Drafting a tight end is often considered a luxury pick because usually teams have more pressing needs. However, OJ Howard just raised his draft stock into the top ten with arguably the best Combine performance of anyone. At 6’6” and 250 pounds, he has the size to be the red-zone threat teams look for at the position. He is also a polished blocker which means he will see a lot of playing time. What sets him apart as a generational talent is his mutant-like athleticism. To put it into context, Howard ran the 40-yard-dash as fast as All-Pro running back David Johnson (4.5 seconds), beat Seattle wide receiver Tyler Lockett’s three-cone drill time (6.85 seconds) and beat Khalil Mack’s 20-yard shuttle time (4.16 seconds). After a few long days of drills and interviews in Lucas Oil Stadium, it is safe to say Howard and his accountant have cause for celebration. By the numbers, if he moved from say pick No. 23 to the Giants to now pick No. 10 to the Bills, his contract increased by around six million dollars, or 1,500,000 Big Macs.

Lastly, Deacs own Marquel Lee attended the Combine and is currently graded as a sixth round prospect at linebacker. It is likely he will have the opportunity to play on a practice squad and possibly make a team’s final roster as inside linebacker depth or a special teams asset. Notably, his 25 reps of 225 pounds in the bench press as second among all linebackers in the draft class.