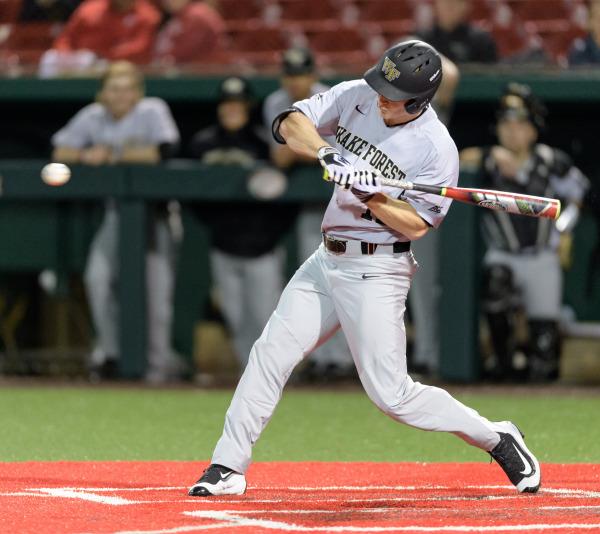 Senior outfielder and leadoff hitter Jonathan Pryor opens up about life on the No. 24 ranked Diamond Deacs.

How have you grown as a player and as a leader throughout your time at Wake Forest?

Throughout my time at Wake Forest, there have been a lot of great players and leaders that I have learned from. There is leadership up and down this team with guys wanting to do whatever is best to help us succeed. I am not a very vocal leader but I always try to do the right thing and expect my teammates to do the same. As a player, there are always guys pushing each other and getting extra work in. When I see teammates going to get extra hitting in after a long day late at night that makes me want to do the same. There is an expectation here that there needs to be work put in outside of practice which has helped my teammates and myself grow as players.

Have you always been comfortable hitting early in the lineup?

Yes I enjoy it. Since I have been in college whether it is at Wake Forest or summer ball, I have probably hit in every spot of the order and have not had an issue with any of them. As a leadoff hitter, I need to become the table setter so it really makes me lock in and focus from the first pitch of the game until the last. Since I can’t watch a pitcher work through the lineup before I’m up, I have been really focused on learning scouting reports which benefits me by preparing myself for the game.

What has led to the team’s successful start?

I think this is the most talent that we have had from top to bottom since I have been here. Going along with that, everyone has been trusting their plan and staying within their skillset. Baseball is a tough game so there are going to be times when someone does not execute. It has happened a lot this year when one of us fails and they guy behind us picks us up by coming in clutch. There’s a sense of relief when you don’t get the job done and the guy behind you gets a big hit or makes a big pitch. That has made it really fun.

Do you approach games against ACC opponents any differently than you do against non-ACC?

No. Every game needs to be approached with equal importance. I think what we’ve been doing well so far this year is we take it one game at a time and don’t try and look ahead to a weekend before we have played our midweek games. ACC games can sometimes be easier to focus on because they are on weekends and we aren’t sitting in class all day, but the midweek games are just as important to win as conference games.

What’s your favorite moment as a Deacon on the field during your career?

I have thought about this question a lot before and it’s tough because there have been so many great moments over the four years but the one that stuck out has to go back to the Duke game in the ACC tournament last year. We were a bubble team for the NCAA tournament and if we lost that game there was a good chance that our season would be over. It was a very close game but getting that final out was the best feeling. We went on to have some big wins after that against Virginia and Minnesota in the postseason. If we were to lose that game, then no one on this team would have played past a play-in game in the ACC tournament. I think that postseason experience from last year will also benefit this year’s team and help this program grow as a whole.

Is the locker room mentality any different this year than in past years?

There are some similarities and differences in the mentality than there have been in years past.

Every year that I have been here, there has been good team chemistry and everyone gets along. But what I have noticed that is special this year is the strong sense of trust. I think that comes from having confidence in yourself and one another. Everyone has had a personal bad game and we’ve had a few bad games as a team, but everyone has done a good job of putting those instances in the past and turning it around the next day. For example, on a Friday night game earlier this season, Gavin Sheets and I had a pretty bad night, but I remember he came up to me at the end of the game and laughed and said  “tonight is in the past, we are going to be okay.” And we both went on to have a pretty good rest of the weekend. That is just one example of a time when we have been able to relax and move on.

What do you see as the keys to maintaining the early success of this season?

We just need to continue to play with the confidence that we’ve been playing with all season. It’s a long season and not everything is going to go our way, but as long as we can bounce back from when something bad happens then we are going to be where we want to be. A time when we did a good job of this was last weekend after our Friday night game against Georgia Tech. It was a really bad loss, but when we got to the field the next day, everyone put that game behind them and came out with energy and we were able to win the next two games against Tech. That is not easy to do. Also, when we are playing well, we can’t get too comfortable and need to come out ready to compete every day.