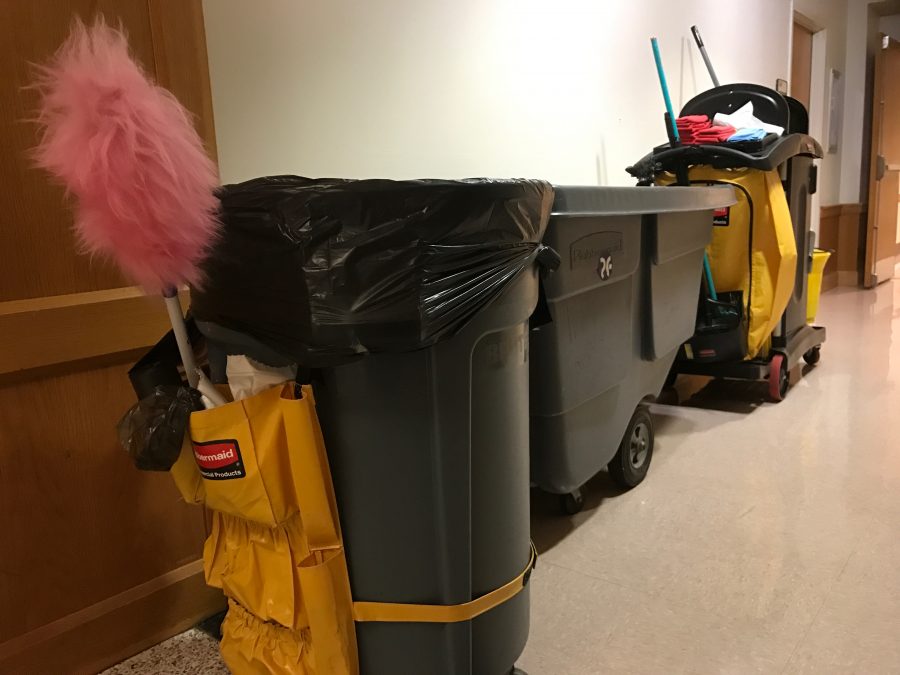 Starting on July 1st of this year, the day porter janitors will join the third shift janitors in being outsourced to the Budd Group — meaning they will no longer be direct employees of the school.

Faculty and staff have raised concerns about outsourcing the janitorial service to a third party because it means the university will no longer be able to directly regulate the pay and benefits of these janitorial staff.

According to John Shenette, the associate vice president of facilities and campus services, the university chose to expand their partnership with the Budd Group in order to “lower operational costs and ultimately minimize staff turnover, while capitalizing on the efficient service levels the Budd Group has provided.”

This decision to outsource to a third party contractor comes after an agreement between the Faculty Senate and administration was reached that all employees of the university would earn a living wage.

Currently, Wake Forest’s custodial services are organized into four categories: residence life and housing, third shift cleaning team, day porters and floor crew. The third shift cleaning team works from the hours of 11 p.m. to 7 a.m. and clean academic and administrative buildings when they are unoccupied. Since July 2015, this category of janitors has been contracted to Budd Group, a third party contracting company that hires janitorial, maintenance, landscape and facilities workers for their clients, similar to how Aramark contracts employees in food and dining services.

However, starting in July 2017, the day porters, who work during the hours when the buildings are occupied and complete the tasks such as trash removal, restocking soap and mopping spills, will also be contracted out to the Budd Group.

“The porters have had opportunities to apply for openings within their current department for the past two years, while receiving continued support for exploring positions across the university,” said John Shenette, assistant vice president for facilities and campus services. “[There is] no impact to current facilities and campus employees  that are not porters or third shift.”

Hof Milam, the executive vice president of the university, said the claim that there will be major cuts to the numbers of janitors is not accurate.

Yet faculty are concerned that turning these employees over to the hands of another contractor could put them in danger of making wages that put them below the poverty line.

Two faculty members, David Coates, professor of politics and international affairs, and Steve Virgil, professor of law and executive director of experiential education, will be meeting with the administration on Thursday, March 30 in order to better understand the reasons for the transitions and its effects.

“We are meeting with the administration about the terms and we want to know why they are contracting with Budd Group,” Coates said. “It would be unfortunate if these people are going to be the ones bearing the cut in costs when we are spending money on other things. We want to make sure we look after the people caught up in that transition.”

Coates has been actively engaged in collaborating with the administration to ensure the values that Wake Forest promotes align with the actions of the university.

“I am heavily involved in trying to make Wake Forest a poverty-free space and I’ve been working closely with the administration to try and do that,” Coates said. “Because how can the university be committed to Pro Humanitate if we are not Pro Humanitate to our own people? There’s a gap between what is being done to these people and the value system that we as a university are committed to, so what we have got to do is bring the two back into line.”

In a community-based campus where students are encouraged to promote the values of the school motto ‘Pro Humanitate’, students have brought up the same concerns as Coates.

“The janitorial staff at Wake Forest play an equally integral role in creating a cohesive, welcoming campus environment as the students, professors and other staff members,” said sophomore Maddie Baxter. “Prioritizing financial savings over long-time university employees, many of which have personal friendships with students, deeply rejects our school’s prized notion of Pro Humanitate.”

Sophomore Leeden Rukstalis echoed both Baxter’s appreciation for the workers and her concerns for their wellbeing.

“Though Wake Forest seems to pride itself on upholding the notion of Pro Humanitate, it has done little to prove that it cares about anything other than profit and branding,” said sophomore Leeden Rukstalis. “The current janitorial staff, pit workers and Benson workers deserve raises for how hard they work and how friendly they are. The janitor in Piccolo never fails to make my morning and wish me good luck with my day. If we really embraced Pro Humanitate, we would give back to the workers.”