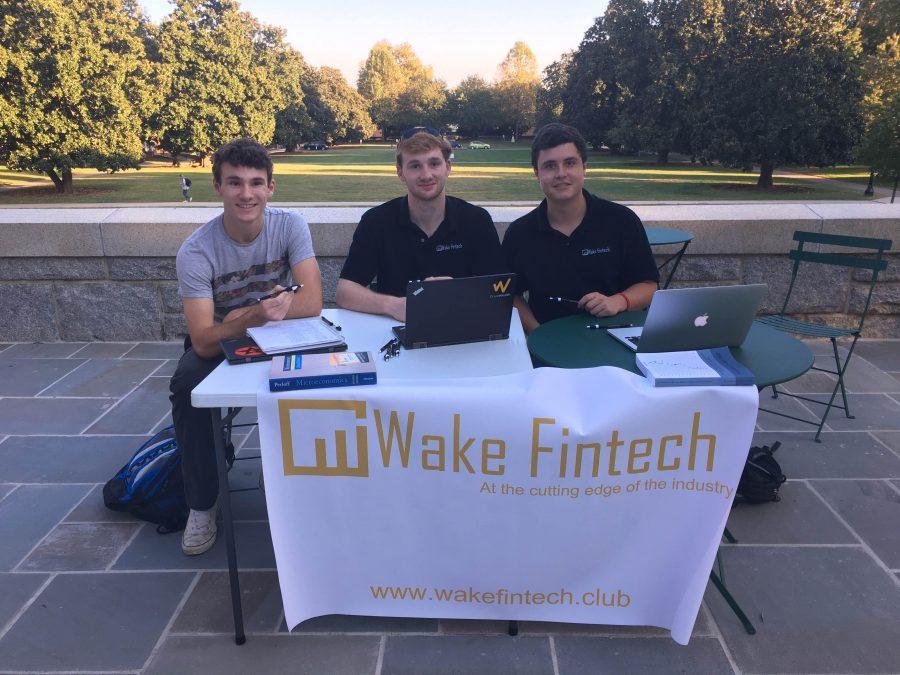 While studying abroad in Barcelona, Spain, Kevin Leffew was struck with an idea. Combining his interests in the financial and technology industries, he started to build a website that reflected the vision for a new club at Wake Forest that would explore the frontier of this intersection. Wake Fintech was born.

In the fall of 2016, the Wake Fintech club was granted its charter by the university. As president of the club, Leffew has since focused efforts on creating an environment that fosters discussion and gives students the chance to present research on topics related to the Fintech industry that interest them. Just last evening, members of the club dethroned MIT and UC Berkley in a competition to become the United States blockchain champions.

What inspired you to start the WakeFintech club?

So I noticed with the opening of the Wake Innovation quarter and with a few of the initiatives related to that outgrowth from campus that there was kind of an opening for more creative entrepreneurial growth within the school ecosystem. So Wake Fintech, by nature of being in the financial technology industry is kind of at the frontier of finance. But rather than focusing on investment banking or looking at how do we get into sales and trading, we wanted to look at how do we think that the financial market could be altered?

So we’re focused on how we can create a better financial structure to underpin the digital web 3.0 economy.  It’s that kind of focus confined within the intersection of the financial industry and the technology industry. We didn’t see any clubs that were specifically looking at the changing of markets rather than what already existed. So I kind of saw that opening and what we cover at Wake Fintech hadn’t been touched on by either the financial club, or the Dow Jones club or the Entrepreneurship Society. So I gathered a group of students who were interested and went ahead and started it up.

What value do you think students can gain from Wake Fintech that makes it stand out from other clubs?

I think Wake Fintech provides real exposure to the technical side of the financial industry and that’s really where the value lies right now in the industry itself. I also feel like going through this club has given me avenues to pursue different startups, employers and planted the idea that I can approach different decentralized organizations and work directly with them. So anything from Robo Advising Investment Firms to blockchain for Interbank settlements.

Can you explain what blockchain is in layman’s terms?

Yeah, so if you think of accounting, blockchain is a ledger in many ways. It’s a distributed ledger where all these different computers have a copy of that same ledger and what that does is it allows them to form a consensus on transactions without the need for a financial intermediary to provide trusts. So its basically a trustless, decentralized system for not only financial transactions but for things like smart contracts or any kind of state transfer. It’s a term used in the computer science industry.

So what have you all been focused on in the year after being chartered by the university?

After being chartered this year, we meet weekly on Tuesdays in Farrell in a basement classroom. We hold presentations but generally the presentations function more like a round table discussion where anyone can interject at any point or raise their hand. We do a lot of brainstorming and thought experiments. We want the format of our club and our meetings to reflect the decentralized values that we uphold. So in the vein of decentralization, one of the goals of the club is to give everyone a role or a stake in the game. So the way the club functions is that everyone comes to the club with their own interests, their own background in the financial or tech industries and what they’ve done in the past. I try to leverage their past experience in a way that they can research and learn about some kind of frontier-related topic in their own industry. So everyone presents, everyone writes about a topic that they find interesting and the rest of the club supports them when they share what they’ve researched and are interested in. Eventually, they turn their presentation into a blog post which we then add to our club website.

What are the decentralized values that you’re talking about?

Basically, when you become a part of Wake Fintech, we want you to be able to contribute equally to the club. Where its not like a ‘you do this and I’ll do that’ kind of environment. It’s more of a network where you can contribute and we’ll use our collective resources and encouragement and positive feedback to kind of lift up whatever you’re interested in. For example, we have some people really interested in Robo Investment firms, so we have someone writing an article about one of these firms and then he can go and consult with someone else who’s interested in the same field and had an internship with a Robo Investment Firm.

So we kind of create this network centered around some basic questions: What are you interested in? How can we apply what interests you in a way that promotes active dialogue and active learning? And we’re always leaning toward a frontier understanding of technology. This is so that people can learn from each other and learn what their approaches are. We, as a group, believe that to understand innovation you have to understand what the internal velocity of the market is moving toward.

Is there a diverse range of majors among the students who are a part of Wake Fintech?

If you look at Wake Forest demographics in terms of majors, I think we have a very diverse set. I think people with an interest in either cutting-edge technology coming out of the computer science department alongside people in the financial industry and economics majors are probably best suited, but there are really no real prerequisite requirements.  A lot of the learning that we do is on site and we’re kind of one team trying to learn this new web 3.0 frontier together.

We also  have a number of students across each class. We’ve had a ton of freshman and underclassman interest which has been great. That might actually be our biggest demographic in terms of age.

In terms of majors though we have a very diverse set of majors because we’re looking at kind of cross-disciplinary fields, right? So its where finance, economics, technology, computer science and all this stuff intersects. So you can come in with any kind of background and bring a level of value because its kind of more, in some sense, theoretical. We’re constantly bouncing around innovative ideas to financial structures.

Is there a memory from this organization that you think will stay with you after you graduate?

For sure. Recently, we went up against Rochester Institute of Technology in a blockchain trivia based competition, and we won. We advanced to the next round last night actually and beat MIT and UC Berkley to become the United States blockchain champions. Next we get to face off against Toronto, McGill, a Thai university and a Dutch university. So I’m hoping that will be our best memory.

And I will say that looking back, I think the whole story of us moving from round table discussions in rented-out ZSR library cubicles to now having a full, rented-out classroom in Farrell and seeing that growth from doing small encryption workshops and helping people with vary narrowly focused interests to this wide outgrowth of interests has been the most memorable aspect of the club. It’s really seeing that growth and seeing it institutionalized within Wake Forest that I think will stick with me.