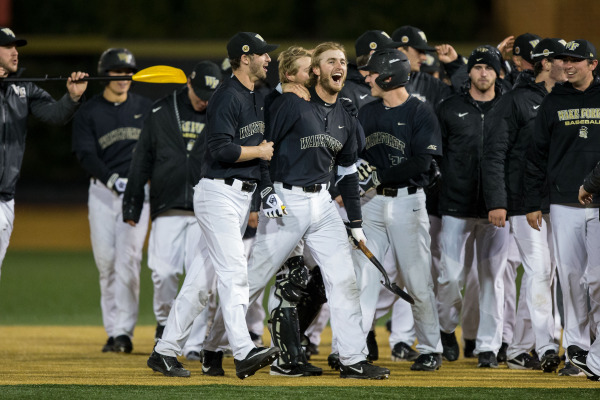 Ranked No. 17 in the nation, the Wake Forest baseball team has picked up considerable energy with a 22-8 overall record and 8-4 conference record.

With 13 wins at home this season, the Deacs are hoping to carry the momentum into potential post-season tournament play.

On Thursday, March 30, the Deacs traveled down to Miami, Florida to take on the Hurricanes. Despite only having two hits the entire game, Wake Forest beat Miami 2-1 on Friday, March 31.

The only runs were scored off of junior Keegan Maronpot’s single in the second inning. Senior Parker Dunshee threw seven innings and only allowed one run to score. Sophomore Griffin Roberts got the save after throwing a scoreless eighth and ninth inning.

Yet in the game on Saturday night, April 1, the Deacs didn’t fare so fortunate against the Hurricanes. Wake Forest’s offense was never able to pick up speed and the Deacons lost 5-1.

Junior Donnie Sellers started the game for the Deacs. But after a few errors and walks, Miami scored their runs.

On Sunday, Wake Forest bounced back from their previous loss with a 9-0 sweep against Miami in order to ultimately win the series.

After the weekend in Miami, the Deacs faced another away game at Elon’s home field. The Deac’s had a sweeping eighth inning, scoring eight-runs.

During this inning, freshman Nick DiPonzio became the first player since 2012 to hit two home runs in an inning, hitting a solo shot and grand slam. Junior Drew Loepprich started for the Deacs and struck out seven in five innings.

In the 30 games this season, the Deacs have reached a total of 55 home runs for the season. This weekend, April 7-9, the Deacs hope to continue their strong power as they head to Kentucky for a three-game series at No. 2 Louisville.