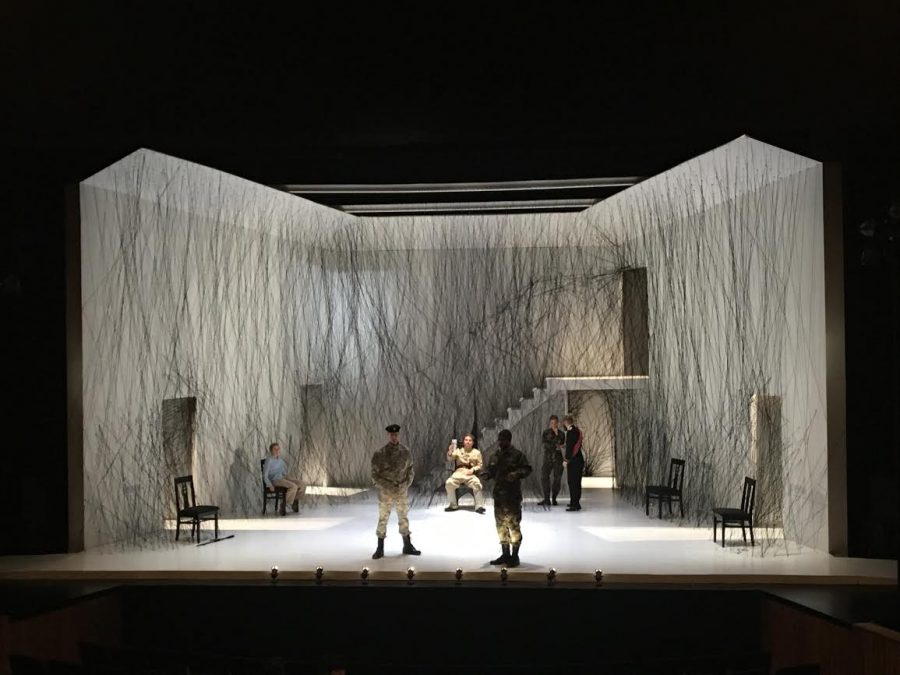 “Double, double toil and trouble. Fire burn and cauldron bubble,” chant the three weird sisters as they await the arrival of the prophesized king — the one and only Macbeth.

For the Wake Forest community, the wait is over.  Macbeth has arrived on campus.

The theatre department invites the community to join the cast of Macbeth and watch as a noble and revered warrior transforms into a corrupt and murderous king.  Last Friday, March 31 was the opening night of the production of Macbeth.

“The show is set in 20th century,” said senior Philip Kayser, who plays Macbeth.  “We all tried to bring a more modern sensibility to our characters, so that the production would be accessible to college students.”

Instead of following a traditional Elizabethan-style production, Director Brook Davis chose to create a contemporary portrayal of the play. Davis, not wanting to give too much away, described some of the production’s unique elements: unconventional witches, a set with striking design elements and Hecate, a character cut from the original play.

The choice of the spring play is a departmental decision, and this year, the theater department was looking to do a tragedy.

“Macbeth is a tragedy with a lot of great female roles, which is hard to find in Shakespeare’s plays,” Davis said.  “The play also raises interesting conversations about power, leadership, and responsibility to others.”

“Shakespeare is a pretty big challenge,” Kayser said.  “We did a ton of work with our text coach to understand all the language clues.  Shakespeare’s language provides clues about how you should act your character and we all spent hours mining the text for those clues to create the best portrayals of our characters.”

One of the main themes Davis wanted to highlight to the audience was leadership.  Hanging outside the auditorium doors is a giant black poster that reads, “What does leadership mean to you?”

Underneath the question are responses from each cast member, describing how they think their character views leadership. Audience members can join the conversation by writing their own responses on sticky notes and hanging their answers on the poster.

Davis and the cast want to continue this conversation off stage.  After the final show on April 7, a discussion, Tragedies of Character: Leadership Lessons from Macbeth, will be held in SCALES at 9:30 p.m. Participants will explore the themes of the play, raising questions such as what can we learn about leadership and character from one of Shakespeare’s most famous tragedies, how might ambition, greed and power corrupt the character of leaders, and who are the “prophets” and “witches” of our time?

“I look forward to attending the performance and discussion afterwards,” said freshman Kathleen Bashur.  “Both are a great opportunity for students to analyze Shakespeare outside of the classroom.”