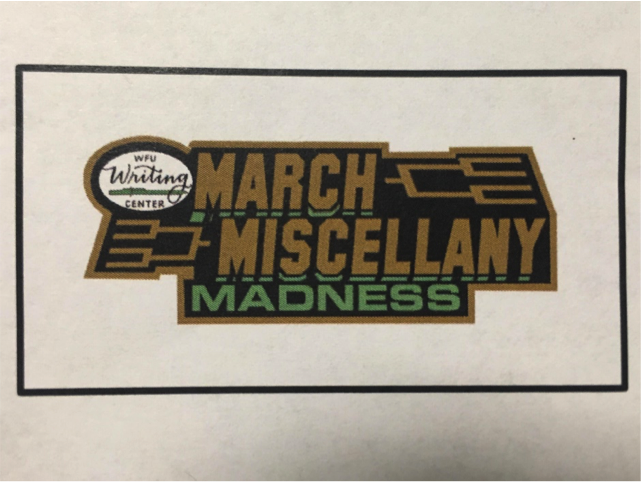 Inspired by the hype of the NCAA March Madness tournament, 16 authors went head-to-head in a bracket-style battle.

Ryan Shirey, director of the writing center, acted as the announcer for the evening. The first event of its kind, Shirey said that the tournament was intended to be treated “like watching basketball, but more intellectual.”

Typical game-day snacks, like chips and dip, were served for an added touch.

To help people discover new authors who they might enjoy, the 16 authors selected were ones who are not widely known — which is why the event was called “Miscellany Madness.”

In addition to being unknown, the readers chose authors with whom they had a personal connection. English professor Jenny Pyke, who read from author Samantha Hunt, said, “It was so wonderful to have this other space outside the classroom to talk about literature in a personal way and see the meaning that authors have to people.”

Authors “won” and stayed in the tournament based on popularity determined by the audience. Little remote clickers were distributed to audience members so that they could vote electronically for an author.

Before the tournament began, Shirey reminded audience members that voting was “not a question of your friend” or “who reads with the most dramatic flair.” Instead, the audience was encouraged to vote based on which author whose work they would like to read more of.

Audience members were also provided with randomized brackets. They could fill it out in advance or keep track of winners as the tournament progressed. The flip side of the bracket listed the authors and recommendations for their work by the readers.

A mix of faculty, staff and students read the authors’ works. Each reader was allotted a couple of minutes to read their selection of their author’s work, explain a bit about their author and their work, and what the author means to mean.

In keeping with the basketball theme, the readers were jokingly told to stay inside the semi-circle at the front of the ZSR auditorium.

The first reader was Omaar Hena, a professor in the English department. He read work from Derek Walcott’s A Far Cry from Africa. Unfortunately, he lost out to Maya Marks, who read a part of a poem by Richard Siken.

Many of the outcomes were close calls. At the end of Round 2, what seemed impossible happened — the vote came to a perfect split of 50-50. The tie occurred between poet Nikky Finney, read by Allison Thompson, and novelist Edwidge Danticat, read by Stephanie Bennett.

Luckily, a tiebreaker rule had been prepared beforehand. Each reader had to spontaneously choose a line from their author’s work to read and then votes were re-cast. Danticat ended up winning and moving onto the Final Four. Samantha Hunt, read by Pyke, faced Danticat in the Championship Round. Hunt won in a landslide with a score of 95 to 5. For her win, Pyke received a book.

Those in attendance spoke highly of the event. For law student Koren Hardy, she relished the opportunity of being exposed to literature that wasn’t required for her classes.

“I really appreciated that I got to experience prose and poetry again,” Hardy said.

Sophomore Hannah Goodwin echoed the feelings of discovering unknown authors that people have personal connections with.

“I enjoyed learning of so many different authors all in one place and seeing that so many people felt the same way as me,” Goodwin said.