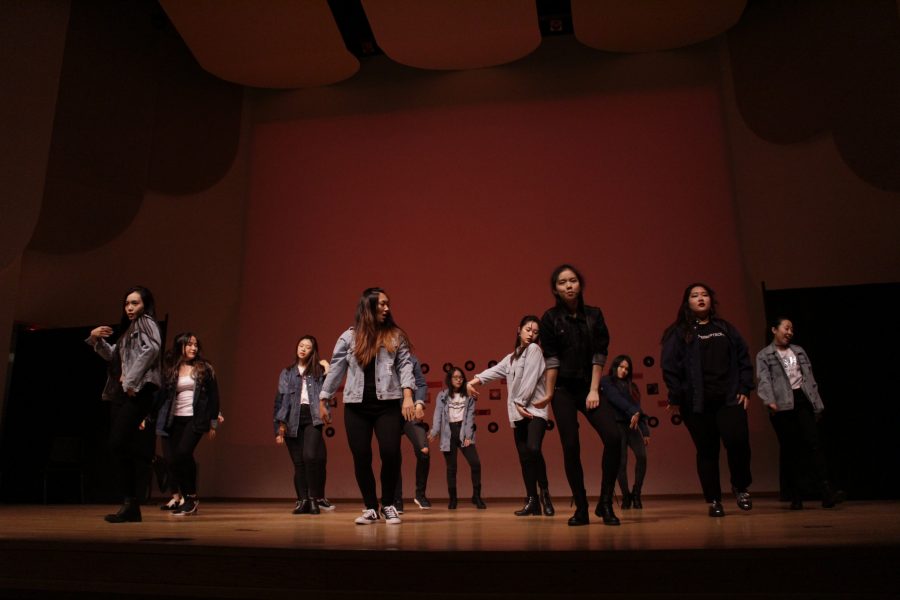 A new staff group, The Get Down Professionals, and five student crews danced for a packed and cheering Brendle Recital Hall in the third annual spring dance showcase on Sunday, April 2 at 6 p.m.

This year’s theme was “Throwbacks” and while admission was free, audience members were encouraged to donate to World Relief’s refugee location efforts and “DANCE: I Do It for the Kids,” an initiative to buy toys for Brenner’s Children’s Hospital.

“This started out as a dream a few years ago with hardly anyone in the seats and now to see how big it’s gotten, and to hear how excited people get when the dance show is mentioned is a blessing,” said senior Bradley Singleton, the recruitment chair and previous treasurer for Ritmo Latino, the student Latin dance group.

The show allows the multicultural groups to share a stage and creates a dance crew community. It is organized and co-hosted by Celina Alexander, the assistant director of the Wake Forest Intercultural Center and a recently graduated student each year.

“Celina has done an amazing job forming a dance community on campus” said senior Hannah Dobie, president of Deacon Dhamaal, the student Bollywood fusion dance team. “If it weren’t for Celina, our dance groups would not have an annual event to help plan, be a part of and perform for.”

In addition to performing their individual sets, the performance groups came together for an opening and closing number.

The show began with Beyonce’s “Crazy in Love,” with each dance crew performing to their own section of the song. It ended with a compilation of songs and choreography that had the dancers learning entirely new styles of choreography and performing with each other’s groups. This is one of the dancers’ favorite parts of the show.

“Every year the show prep gets smoother and smoother,” said senior MacLean Lessenberry, president of Momentum Crew. “This year’s rehearsals were the best yet.”

Deacon Dhamaal performed first. Shortly after the set began, there was a technical difficulty that caused a problem with the music. The group remained confident and excited, however, and the performance went on with smiles and without a hitch to audience applause. Deacon Dhamaal’s dance, which was choreographed by Aparna Sivakumar and Ruchika Khot, was fun and upbeat and meant to emulate the spring season and Holi festival. It featured recently popular and recognizable songs from the Bollywood genre.

Lost In Translation, or L.I.T., a dance team devoted to the representation of contemporary Asian popular culture, danced to two complication sets during the show, which included both American throwbacks, Asian pop hits. The group’s performance also included chair dancing and even a humorous dance to “Gangnam Style” where one crew member wore a mask.

Ritmo Latino, founded in 2011, also performed two sets during the show, which both included partner dances. They danced to a cover of Michael Jackson’s “Billie Jean” and the male dancers wore sparkling gloves with their costumes. Alexander also serves as the official staff adviser for Ritmo Latino and other groups. She and the dancers choreographed their set collaboratively.

Momentum Crew, a performance-based hip hop team dedicated to inclusion and studying urban dance technique, actually performed their competition set for the season, which was choreographed by a Momentum Crew alum, Sean Taylor, with current head choreographer, Abby Jones. The set is food themed, including songs like “Chicken Noodle Soup,” “Collard Greens,” “Peaches & Cream,” “Peanut Butter Jelly Time” and a remix of the “beans, greens, potatoes, tomatoes, chicken, turkeys, rabbit — you name it” song that went viral during the fall of 2016. One dancer even wears a banana suit.

“We wanted a fun theme that was cohesive, but would let us stand out against our competition,” Lessenberry said. “We threw around the idea of a ‘food’ theme as a joke, but then we all ended up actually really loving it so we went all out with everything.”

Setting the Groove, a group of tap dancers founded in 2011, performed a set of excerpts from five Stevie Wonder songs — “For Once in My Life,” “Signed, Sealed, Delivered,” “Sir Duke,” “I Wish” and “Superstition” — to fit the show’s “Throwbacks” theme.

“I immediately thought that we had to do Stevie Wonder,” said senior Janelle Thomas, the group’s president and choreographer. “I really love the intros to all of Stevie Wonder’s songs, so it was important to me that we kept some element of each of those. Then it just came down to finding good phrasing to end with and cutting each song to be roughly 50-90 seconds, to make a six minute set.”

Thomas choreographed the first and last songs, along with a more challenging piece for the middle of the set. She worked with sophomores Maddie Jones and Morgan Eaves, who each choreographed one of the other two songs, to piece together the group’s choreography, with individual dancers also creating and improvising their own solos.

“We all had our own songs and didn’t have to worry about trying to match another person’s style,” Thomas said. “We all got to do our own thing, but it still all fit together as a set.”

The show ended with a closing number that allowed dancers to choose to participate in choreography with any of the five student crews. Each dancer participated in at least one other group’s piece, allowing dancers to branch out and try new styles of dance and creating a really unique experience for the audience.

“It’s the best part of the show because we all get to try any other style and actually perform it!” said Lessenberry.