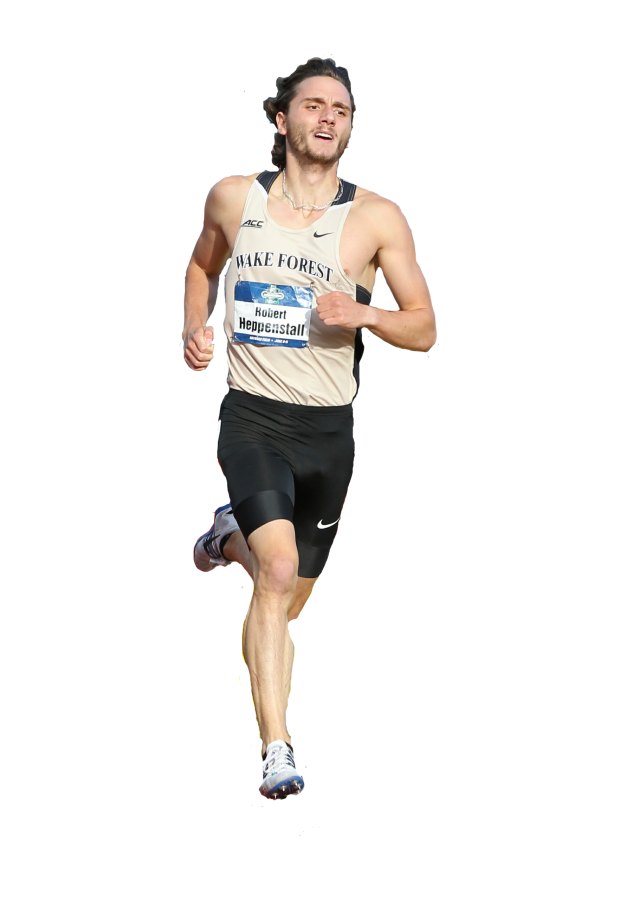 Standout sophomore Robert Heppenstall has proven himself to be a rising star on the track for both Wake Forest and his home country of Canada.

When did you start running track?

I started running track in ninth grade. Before that, I played a lot of sports like football and basketball, and I kept playing other sports until 11th grade.

In 12th grade, I pretty much focused on track my whole senior year and took it seriously.

When did you know that you could run at an elite level?

But once I transcended into the next level, which is the world junior level,

I kind of decided that this is what I want to do and pursue, especially in college.

That helped me with the decision to focus my whole 12th grade year on trying to run fast for my senior season, junior Pan-Am Championship and trying to pick a college.

When did you start receiving college offers?

Wake Forest was actually the first school to contact me going into my 11th grade year.

I was contacted by schools like Kentucky and Michigan, but nothing really followed through.

I actually wasn’t offered any sort of scholarship by any school other than Wake Forest.

So it all worked out really well. I’m obviously really happy to be here and just the fact that Wake Forest offered me a scholarship is an opportunity that you can’t put a price on.

I was considering going to other schools and working for a scholarship, but I liked Wake Forest due to the fact that I really liked the people on the team and I heard the team had a really good culture coming in. On my recruiting visit, I really enjoyed the guys that I was around.

Academically, it really helps to have a school that places academics so highly with everything that they’re known for. Also I’ve heard good things about Wake Forest from other people.

When I visited the campus, I really liked it. It’s something that’s hard to explain; You just have a feel for the right place you want to be, and that’s what I got when I came to Wake Forest.

Since you’ve been at Wake Forest, how have you improved on the track?

Definitely coming into college, I didn’t really have that much background in a sense of mileage. I came from a very low-mileage background doing 400 meter and things like that. Coming into Wake Forest my freshman year, I knew that I had to bump up my training and get a lot more mileage and a lot more intense training.

I had to mentally prepare for that. After my last year, getting in really good races, learning tactics and learning how the NCAA really works over the season, you learn a lot about how everything works, when you’re supposed to run fast and things like that.

My freshman year really worked out in a sense that all the pieces fell together at the right time. My personal best went down by a little more than a second in the 800 M from a 1:47.9 to a 1:46.7, which I ran later in the fall.

It definitely helped to get mileage in and run in the right races, and not even running significantly faster, but learning how to run in the NCAA finals and ACC finals and things like that.

Hopefully I can try to replicate that this year and learn from my NCAA experience.

How do you approach each race differently?

I think in high school I used to get really nervous for races and over think the race, but racing so much in the NCAA’s has just taught me to relax and that at the end of the race, I’ll be hurting and it’ll suck a little bit, but you get through it. The mindset last year was just to take every race as an opportunity rather than a requirement, try to keep a positive mindset and make sure that the last thought before you step to the line is a positive one.

For an NCAA final or an ACC final, you want to race smart rather than hard and put yourself in a good position, which is something I’m still learning even as a sophomore.

I’m still learning how to put myself in good positions, which is like 50 percent of the race, not even running as hard as you can but putting yourself in good position. To answer the question, I try to keep everything even when warming up, treating every race like it’s just another race and always respect the competition no matter who I’m racing against, but realize that you’re there for a reason, you have a lane on the track and you have just as good a chance as anyone else.

It’s definitely a different experience. Growing up with a big hockey background and in a big hockey town, everybody talked about being on Team Canada and how important that is and what it means to wear the Maple Leaf on your chest. To actually go out and run not just for yourself, but to run for your country, it’s one of those things that you just can’t really explain.

When you’re up on the starting line and they say Robert Heppenstall, from Canada, not just from Ontario, it puts a whole different perspective on it. Being able to represent your country, you just think that I’m one in 35 million people that got to have this opportunity. International experience is definitely one of the things I value in the sport. There are so many talented people in the world that are hard to get exposed to if you’re not on the international stage, but once you reach that stage, you realize that this is another level and another dimension of the sport that a lot of people don’t experience.

I’m just lucky to experience it.