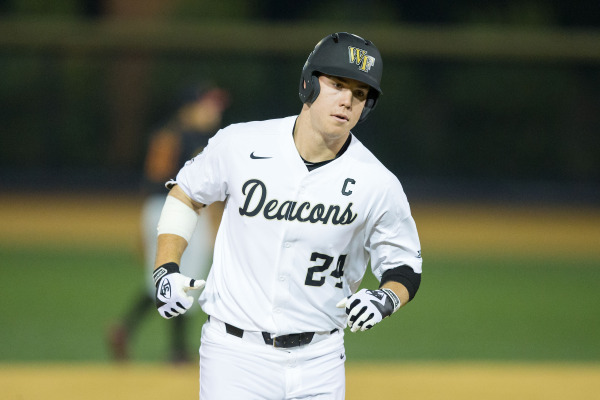 The Wake Forest baseball team recently dropped in the rankings from No. 17 to 20 after losing a series to No. 2 Louisville.

The Demon Deacons faced their toughest challenge of this season this past weekend in Louisville, Kentucky against the No. 2 Louisville Cardinals. The Cardinals have been dominant at home this year with an 18-0 record and 37-0 dating back to last year.

The Cardinals took a 1-0 lead early in the game, but a double by Stuart Fairchild followed by a two-run hit by Gavin Sheets would give the Deacs the lead for good.

Unfortunately, the Deacs dropped the second game of the series. Donnie Sellers had a strong start, pitching six innings, but the bullpen could not hold strong as Louisville took the game 7-6.

Sunday featured the rubber game with the Deacs starting last weeks ACC Pitcher of the Week Connor Johnstone. The Deacs battled throughout the whole game and overcame a four-run deficit to tie the game at 5-5 going in the eighth inning. Louisville used a walk, a hit batter and a double to take the lead for good 7-5.

Next, the Deacs faced reigning National Champion Coastal Carolina. The Deacs beat them earlier this season behind a strong effort by the bullpen and offense.

In this week’s contest on Tuesday, April 11, the Demon Deacons again topped Coastal Carolina. This was a high scoring affair in which Wake Forest came out on top by a score of 19-9 thanks to a grand slam and a three-run-homerun by Fairchild.

The team is off to its best start since opening the 2006 season 23-7. The Demon Deacons also won the first four ACC series of the season for the first time since 2002, which was also the last time they hosted a regional.

The next four games will be played on the Deacs’ home field. First, the Demon Deacons welcome Notre Dame to Winston-Salem for an ACC series, then Charlotte will travel here for one of the final games of the regular season.