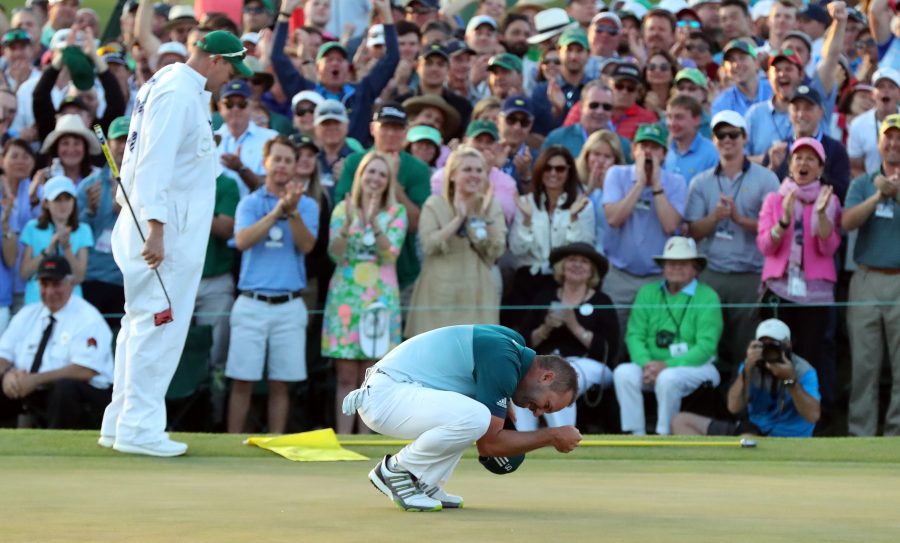 With the famous green jacket firmly in his hands, Sergio Garcia finally felt the emotions of a major champion after he defeated Justin Rose in a playoff at the 2017 Masters.

The final round was basically a two player race, especially on the back nine. Overall, the traditional tournament in Augusta, Georgia finished with an ultra-exciting Sunday afternoon.

Garcia and Rose entered the day tied atop the leaderboard at six-under par. Garcia started with two birdies in the first three holes, while Rose remained at six-under for the tournament. With Garcia starting to take control, Rose answered with birdies on three of the final four holes of the front nine. The two would enter the back nine again tied at eight-under par.

Garcia started off with back-to-back bogeys on 10 and 11 and seemed poised to allow the demons of his past failures at major champions to ruin his chance at a green jacket. However, behind a surprisingly pro-Garcia crowd, he was able to rally with a birdie on 14 and an eagle on 15. Rose gained only one stroke on the 15th, and they two continued their duel tied now at Garcia nine-under with three holes to play.

On the famous par-three 16th, Rose took advantage of beautiful tee shot and converted for a birdie. Garcia could find the cup in two-shots and finished with a par. Rose could not maintain the stroke advantage for a hole, as he bogeyed the 17th. The two would enter the 72nd hole of the tournament still tied at nine-under.

Both players hit gorgeous tee shots as the fans flocked to the final hole to see who would prevail. The players would tip their caps at each other in a sign of respect. Sportsmanship was actually a major theme of the Masters tournament as Garcia and Rose were constantly, congratulating one another. Again, Garcia and Rose hit great second shots with Garcia only a few inches closer, but both with makeable putts. Rose would miss his putt slightly to the left as he was asking the golf ball to break right. Garcia then had one putt to win the tournament, but would also barely miss.

The players would have to go back to the 18th tee box for a playoff and the 73rd hole of the Masters.  Garcia was able to replicate his perfect drive from the previous hole, but Rose would hit his tee shot into the pines. Rose would then have to lay-up onto the fairway, while Garcia was on the green after two shots. Rose would then miss a par putt, basically giving Garcia the trophy. Garcia was able to make his birdie, and after years of heartbreak and scrutiny, he secured the victory.

Charles Schwartzel finished alone in third at six-under, while Matt Kuchar and Thomas Pieters tied for fourth. Rory McIlroy tied for seventh as his quest for a Masters to complete his career grandslam will have to wait another year. Jordan Spieth and Rickie Fowler finished at one-under, good enough for tied for eleventh. World No. 1 Dustin Johnson withdrew on Thursday after he fell down the stairs at the home he was renting.

Garcia is the third Spanish golfer to win the green jacket. The accomplishment was made even more special with it being the 60th birthday of the late Seve Ballesteros, Garcia’s childhood hero. Finally with a major championship in his trophy cabinet, the 37-year old will have the knowledge and confidence to be in serious contention at this year’s summer majors.