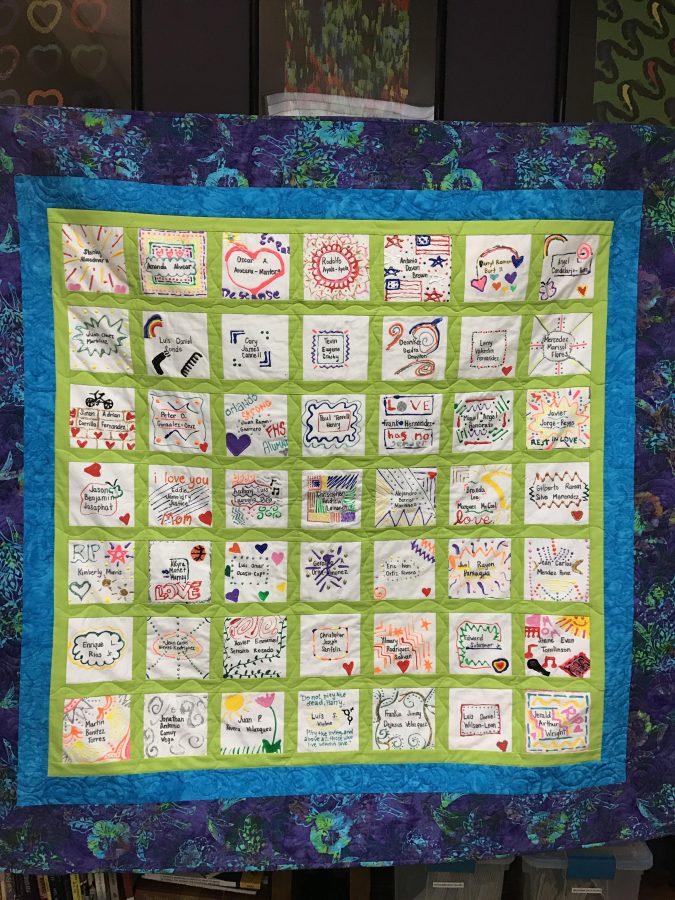 The LGBTQ Center held a dedication ceremony for its Pulse 49 memorial and remembrance space on April 4 from 1-2 p.m. The space consists of two community art projects that students contributed in the fall. The first is a pair of wooden numbers, painted with rainbow colored stripes.

The second is a quilt with 49 squares, each one representing one victim of the shooting that took place on Sunday, June 12, 2016, at an Orlando, Florida gay bar and nightclub. The massacre left 50 people dead, including the gunman, and 53 more injured. It is the deadliest mass shooting in U.S. history.

Professor Kristina Gupta noted the significance of using a quilt to memorialize the victims.

“The Pulse Memorial Quilt, like the AIDS Quilt, is simultaneously a way to remember the victims of violence and discrimination and a call to action,” Gupta said. “I am grateful to the LGBTQ Center for allowing our students to participate in this important project.”

The short ceremony, which took place after the center’s regular coffee hour, honored Latino Awareness Week and the victims of the Pulse massacre with the official unveiling of the finished seven-by-seven quilt.

The center describes it as “a lasting tribute to their lives housed here at Wake Forest.”

During the creation of the remembrance space which took place Nov. 14-18, students were also invited to write journals and silently reflect. Staff members, including directors Kayla Lisenby and Angela Mazaris, and students Kevin Garrity and Richard Cabán Cubero, were available for “support hours for healing.”

“Despite happening over the summer, the tragedy was still fresh within minds as we returned to school,” Garrity said. “Since we were on summer break, we did not do much in the form of communal remembrance or lament. The LGBTQ Center wanted to offer some sort of memorialization, not just for the center, but for the larger Wake Forest community.”

The LGBTQ Center also provided a binder of photos and short biographies of each of the 49 victims. Then, after reading the individual stories, students could memorialize one of the lives lost by selecting one of the blank squares and decorating around the name in the center with provided fabric paint.

“We wanted the memorialization process to be whatever people needed it to be for themselves,” Garrity said. “That is why we chose to offer interactive art pieces for students to help us create. They were the ones who gave vibrancy to the wooden numbers and the quilt squares, and by doing so, they remembered and paid honor to the victims in a way that was fitting for themselves.”

Gupta brought her introduction to WGS class to the space in the fall for the opportunity to contribute.

She felt as though it would connect well to a selection of class readings that discussed the discrimination, marginalization and violence experienced by sexual minorities.

“The Pulse memorialization project was a way for the students in our class to learn more about contemporary violence against LGBTQ+ communities and about the individuals who were killed in the massacre,” Gupta said. “At the same time, by participating in the project, students were able to concretely express their support for LGBTQ+ members of our Wake Forest community.”