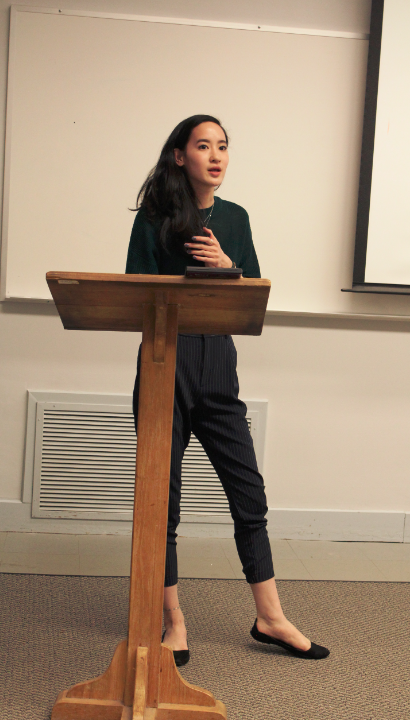 On Wednesday, April 5, Wake Forest’s chapter of Her Campus hosted the Women’s, Gender, and Sexuality (WGS) Studies Department’s S.P.E.A.K. (Student Presentations on Experiences, Art. and Knowledge) series in DeTamble Auditorium. This iteration of the series focused on Islam and Muslim feminist voices.

Sophomore Jacquelyn Hsiao, president of Her Campus, introduced a short documentary titled Voices of Muslim Women from the U.S. South that explores how Muslim women carve out space for self-expression in sometimes hostile environments through the lens of five Muslim University of Alabama students.

Liloia provided an overview of feminist movements in the Middle East before focusing on Kuwait as a case study to illuminate how Muslim women fought to advance their rights in ways compatible with their identities.

“Part of the reason I chose this topic is that a lot of popular conceptions of Islamism or political Islam — and even popular conceptions of feminism — have led people to believe that Islam is inherently opposed to women’s rights,” Liloia said. “But if you actually look at the history of feminism in the Middle East we can see how political Islam and Islamist movements led to the development of new feminist discourses and feminist strategies to advance gender equality while remaining in an Islamic context.”

Shifting from the historical to the personal, senior Fatimina Habboub spoke from her experience as a Muslim woman during her presentation, “Muslim Women Don’t Need Saving: Polarity Between their Identity and the American Narrative.”

Habboub recalled listening to classmates admonish Islam for what they perceived as the unjust subjugation of Muslim women to the practice of veiling such as with the hijab or burka.

“As they went on I couldn’t help but hear pity as my peers spoke from a place of such assured judgment, how they so easily slipped on the shoes as the spokesperson from a population of women they deemed all in need and yet they had no experience with,” Habboub said. “I could not connect my mother, a political scientist, or my grandmother who fought with the Algerian FLN (Front de Libération Nationale) against the French with these stereotypes. And frankly, I couldn’t connect them to myself.”

“You can have the facts, but once you hear a story behind all that, it’s captivating and touches you in a way news can’t,” Hsiao said.

Hsiao felt that the event was a success.

“I was glad there was a good turnout and quite a few people asked questions at the end,” she said.

This event marked the first collaboration between Her Campus and the WGS Department.

“One of my goals for Her Campus next semester is to collaborate with the WGS Department more and expand the types of events we put on,” Hsiao said. “I’m really excited to see what we’ll be able to do.”